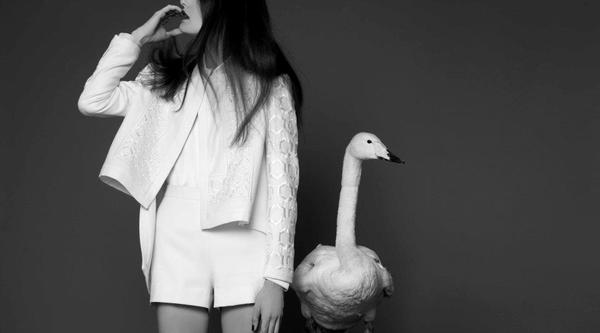 (NEW YORK) Who can resist a great Roomeur? Meet designers Hagit Kassif and Omer Poizner, the brains behind the four month old womenswear brand that isn’t afraid to be itself. Without further ado! BY RACHEL BERNSTEIN

How did you two meet?
Hagit: We studied together at college in Israel, and we were in the same class. We never collaborated while we were in school, but we were really good friends and we always sought each other’s advice while we were working on projects. We had a really good understanding of each other’s point of view in regards to design.
Omer: It’s not easy to find someone in the fashion design world that you have such a good dialogue with and you feel that you can grow with them, so we started to play with the idea of creating something together.

Hagit, you worked for Diane von Furstenberg before stepping out on your own. What was that experience like?
H: I started there as an intern and I stayed for six months. I met Diane a few times while I was there. She didn’t give us advice about design or fashion; she just came and checked on what we were doing. It was a great experience, and I learned a lot. It was a really important part of my fashion life, but I left to do get my Master’s at the Royal College of Art in London.

Six months into your Master’s program, you called Omer to do a collection together. What inspired the change in direction?
H: I decided it was about time to start really doing things! I enjoyed the Master’s classes, and I learned a lot, but I felt like I wanted this collection to be real and not just a student collection that we’d make and no one really cared about. We both had about one and a half years of experience at that time so it felt like now or never.

What’s the response been like so far?
O: For a first collection, the reaction has been really amazing. We’ve also had a lot of people wear our stuff to events, which is just as exciting as being featured in a major newspaper. It makes it real. We’ve met with a few buyers that really like the line, but they want to see more so they’re waiting for our second collection.

Where are you sold right now?
H: We sell in Tel Aviv but with a different collection.
O: We did a capsule based on the first collection for Israel because it’s a very different climate so we had to something special.

What’s the fashion scene in Israel like versus New York?
H: They’re completely different worlds.
O: Israel is a bit more casual, and the climate is very different; it’s much warmer for most of the year, so designs have to be wearable for that type of weather.
H: There is only one week in the year when you can wear wool in Israel!

Who’s been an early supporter?
O: Karolina Kourkova has been seen wearing our clothes, and Sonia Rykiel as well.

Hagit, you also completed a menswear internship. Do you have any plans to someday expand into men’s?
H: One day maybe. We just want to do it step-by-step and do the right thing. Everything has it’s time.
O: We’ll do accessories first before menswear.

Where are your studios located?
H: We have an office in Tel Aviv and our main studio is in New York.

What’s your working relationship like?
H: Our strength is designing together. Overall when we work together, you can never tell who did what when you look at the final result. One of us can start a sketch and then the other continues working on it and we discuss it together.
O: It’s rare that we will argue about something. It’s very collaborative.

Where would you like the brand to be a year from now?
O: I would like it to be in Barney’s.
H: And Bergdorf’s.

You’re launching a website as well, right?
H: Yes, it will be up in one or two weeks. For now we have a great Facebook page featuring the collection.

Who would be your dream person to collaborate with?
O: It would be interesting to do some kind of art installation with someone like Nick Cave.

In light of your brand’s name, what is the best rumor you’ve heard about yourself?
H: That we were going to replace Nicolas Ghesquière at Balenciaga.
O: That’s a joke, of course.