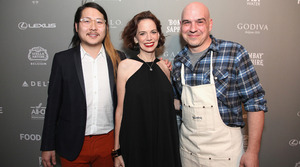 (NEW YORK) It’s almost lunchtime somewhere. Hungry yet? If not, you will be in a moment, just trust: Food & Wine threw a scrumptious fête this week to toast its 2013 crop of Best New Chefs (the 25th class of haute-ies of the kitchen variety!) at Pranna in the Flatiron ‘hood. Soon after the eating had commenced for the eve, the new spate of culinary talents nabbed their awards, in the oh so thematic form of framed chef’s coats, from F&W editrix Dana Cowin. In this year’s class, NYC-based Danny Bowien of Mission Chinese and Empellon’s Alex Stupak made the cut, along with eight other lucky chefs (including the awards’ first-ever Puerto Rico resto, chef Jose Enrique’s eponymous eatery).

Alums were on cooking duty at stations snaking around the parameter and extending up to the mezzanine (where a huge fromage spread was up for grabs, as if more nibbling was necessary). These seven superstar chefs dished up fried chicken with braised greens and hot sauce butter, courtesy of ABC Kitchen’s Dan Kluger,  haddock fritters with curry mayo (April Bloomfield, we love you!), Also of note: WD~50’s Wylie Dufresne and co. cobbled together a popcorn soup with shrimp, jicama and tamarind that was equal parts fantastical, weird, and delicious, and Michael Symon (of Cleveland resto, Lola) whipped up a yogurt cavatelli with lamb Bolognese and mint that will make for ample hungry daydreaming for days to come.

Versace May Expand Beyond The Fam