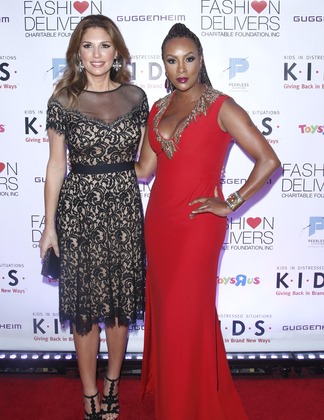 (NEW YORK) Deviating from the expected fundraiser gala format, Fashion Delivers and Kids In Distressed Situations, Inc. decided to put a new spin on their annual bash. Sans a sit-down dinner, the two non-profits filled Pier 60 with over 800 guests. The massive crowd spent most of the evening toasting the evening’s honorees and bantering with industry insiders. Why the sudden change? At last year’s event at The Natural History Museum, a snowstorm prevented half of the guests from attending. Fashion Delivers’ chairman Alan Ellinger explained: “Since we had advance notice and we knew that a lot of people weren’t going to show up, we turned it into a cocktail party and donated all the meals to City Meals on Wheels and everyone loved the event.” How did attendees react to this new format? With a resounding thumbs-up!

The cause for last night’s gathering? Awarding leaders in the fashion and footwear industries for their generous aid to both Fashion Delivers and K.I.D.S. Vivica Fox, the evening’s emcee, kept the crowd in high spirits as she called Brendan Hoffman, president and CEO of The Bon-Ton Stores, Inc, Robert Campbell, chairman and CEO of BBC International, Peter Comisar, vice chairman of Investment Banking at Guggenheim Partners and Daisy Fuentes to the stage to collect their trophies. At the end of the awards ceremony, which raised $1.4 million dollars, Fox was moved to tears through stories of the two organizations’ kind deeds. K.I.D.S. has been providing essential clothing and toys to children in need around the world since 1985, and they joined forces with Fashion Delivers nearly five years ago. Fashion Delivers helps communities and families alike by distributing men’s and women’s clothing and furniture to those afflicted by poverty or natural disasters. The crowd, which included the likes of John Bartlett, Luis Fernandez, and Adrienne Bailon, followed the awards ceremony by hitting the dance floor, late into the night.
DENA SILVER

Look Of The Daily: Jessica Chastain In Chanel