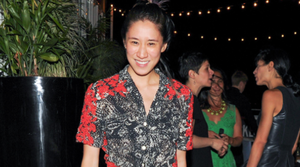 (NEW YORK) On October 24th and 25th Lucky magazine will host their 6th FABB: Fashion and Beauty Blog conference at the TimesCenter and the Condé Nast building. This year the already sold out conference moved from L.A. to New York and will be hosted by Lucky cover girls Eva Mendes and Kate Bosworth plus, BryanBoy and Warby Parker’s Neil Blumenthal. The latter will be on hand to head up the Founder Series where guests like Katia Beauchamp of Birchbox, Emily Weiss of Into The Gloss, and Tamara Mellon, to name a few, will discuss how they made it. We caught up with Eva Chen to see how she’s organizing her first big conference four months in as the new EIC at Lucky.
BY PAIGE REDDINGER

What has your first experience curating a conference been like?
To have the responsibility of curating an entire conference has definitely been an experience. There are 300 plus people attending, so I felt a great responsibility of providing something that they wouldn’t otherwise be able to get. It’s been really fun putting together a dream team line-up, there are people from Hollywood, people from the tech community, people from the blogging community, and I am hoping that Lucky Fabb provides inspiration and actual practical advice, as well as just a great fun networking opportunity for these girls and guys.

How much time have you put into this?
I’ve been at Lucky for just under four months and it has been a full four months to say the least. My first week they were like, “By the way…Lucky Fabb.” I really believe in the blogging community, as someone who loves reading blogs and I really spend a lot of time reading these sites.

Which blogs do you follow the most?
Instagram has been a game changer, because now I follow my favorite personalities there and I use Bloglovin‘ to aggregate all of the people that I follow into one email a day. Of course, I love Leandra Medine and also Emily Weiss. I think Emily really shows beauty in such a stylish way and Leandra has such a great personality. She’s a really a terrific writer with a strong, powerful voice. I was lucky enough to meet Miroslava Duma in Europe, who I follow on her site and Instagram. I also follow Camille Charrière from Camille Over the Rainbow, Nicole Warne from Gary Pepper Vintage, and Margaret Zhang from Shine By Three. There are also two nail blogs that I follow, one is called Miss Lady Finger, which is a nail polish blog. She recreates trends from the runway onto her nails and I also follow a nail artist called AstroWifey. One of her friends connected us on Twitter and then I met her in person and she spontaneously gave me a manicure inspired by Takashi Murakami!

Cool! Will you be doing anything differently this year?
We are introducing something new called Lucky Founder’S Series, which is kind of hailed from people starting their business, whether it is a blog like Emily Weiss is doing one or someone like Neil Blumenthal from Warby Parker. It isn’t just about SEO and how to tweet like a rock star. Most of the people that will be attending are under 30. I really hope that the Founder’S Series inspires people to be brave and come up with the next great thing.

Do you have people coming from all over?
Yes, people travel on their own to come and learn. It’s almost like a mini school is in session. I attended the one in April, because I was in L.A. and you overhear conversations and people will be like “I follow you on Twitter and Instagram. It’s so nice to meet you in person,” and I still get that a lot. I followed Miroslava Duma on Instagram and social media for a while, but it’s easier to meet people in real life. I’m happy that I can provide a place for people to congregate and meet to make these real life connections.

Do you think that people in LA or New York are more into social media?
Both. I think it’s more of a psychographic vision. There are so many people on social media in Asia for instance. It’s a global thing. I don’t think that I would have ever have met the editor of Japanese Vogue if we hadn’t started following each other on Instagram. I think that social media in general is a mentality.

What was it like to work with Lucky cover stars Eva Mendes and Kate Bosworth?
Eva is really inspiring as a new American face. She is so outspoken and smart. When you read that interview, you can just tell her personality immediately. Kate looks so good in everything and her personal style is next level. She’s one of those people that could literally be wearing a $15 dollar GAP t-shirt, Levi jeans, and Isabel Marant boots and you see magic in the way she puts her outfit together, which I think will be so inspiring for all of the fashion bloggers attending. They both epitomize the style of Lucky and I’m so happy that they will both be at Fabb. I’m also looking forward to a good Eva and Eva photo-op moment.

You have a lot of great names on this roster, how hard was it coordinating a date that worked with everyone’s schedules?
It was a slight nightmare! It’s like trying to corral people that are always traveling. We have all these start up people in the tech world and one day they are in Istanbul, the next day they are in Tokyo, then in L.A. It was not easy, but I think that they add value to an event like this, because they really want to speak to the next generation and tell their stories. It‘s very gratifying to know that everyone will be together in one room over the span of two days. There will be a lot of selfies and high-fiving!