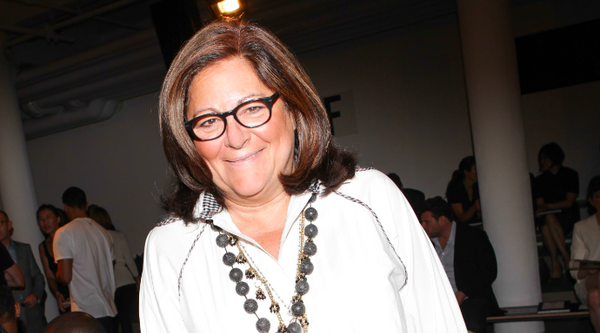 (SEOUL) Making sense of the parade of Korean designers that showed their wares this week could have one feeling slightly lost in translation. NYFW doyenne Fern Mallis to the rescue! The fashion savant attended Seoul Fashion Week’s Fall ’13 and Spring ’14 showings, and for the past six months she’s been mentoring a handful of Korean designers via weekly emails. Mallis sat down with The Daily this morning to divulge her two cents on Seoul style over a glorious breakfast spread (every morning ought to begin with dumplings, bulgogi, and udon soup, in our humble opinion). She’s got sage pointers for the burgeoning talents, from retailers to target and continental competition to aesthetics she adores (and those she could do without). You’re bound to hear plenty more about these Korea-based talents, so it’d be wise to get acquainted now…
BY ALEXANDRA ILYASHOV

Which Seoul designers turned out the strongest shows?
pushBUTTON was so well thought-out visually: the clothing was beautifully made, the shoes were extraordinary. The models, the hair, the make-up—it was a world-class show as far as I’m concerned! LEYII was kind of a Korean version of Yeohlee. I really liked Big Park, Kye, Munsoo Kwon, and Johnny Hates Jazz as well.

Any prevalent trends you could’ve done without?
There was just a little bit too much black and white this season—it makes for very boring stores. I also noticed there was barely any eveningwear in Seoul.

Seoul is angling to trump Tokyo in global fashion week prominence. Thoughts?
It’s absolutely a goal Seoul should hold onto and work towards. They need to keep getting more international media here—and they should pursue that with a serious public relations effort. They need to get more young bloggers here, since they attract a lot of attention.

What kinds of retailers should these Korean designers be aiming to be stocked by?
Opening Ceremony carries some of these lines, and the younger folks that come here are buying for small boutiques. That’s all great, but I don’t know if that makes an impact. I’m still a little old school!

So department stores, then?
Barneys or Bergdorf’s buying you is a kind of endorsement. Saks is here, and I’m hoping they’ll make some buys. Bloomingdale’s or Nordstrom would also be smart—they should hit the big names to make some noise. Some of these lines I could certainly see hanging in Maxfield’s, Ultimo, or Ikram. Those specialty stores around the world are prestigious, but aren’t big businesses in the same way.

You were quite taken by the street fashion, right?
The street fashion WWD showed from Tokyo doesn’t hold a candle to what I’ve seen in Seoul.  I’m totally impressed by the style in this country. And the beauty! The women are beyond pretty, and the men are very good looking. Not just the models. There’s so much innate style, and it seems more effortless.

How did your mentoring role come about?
I came to Seoul Fashion Week last season, and I was excited by the talent. The organizers created a mentorship program, dividing up top-tier designers among a few mentors. Each designer asked me two questions per week by email.

What kind of constructive criticism did you offer up?
A problem for designers everywhere is overthinking a collection. Plastic surgery and cutting up faces was the basis for one of the collections in Seoul. Sometimes, you should just make pretty clothes! You can’t solve the world’s problems with a runway show. Designers want to have really editorial message of what they’re sending out. That makes for very good copy or a good line sheet, but sometimes it has nothing to do with the clothing. I’m very practical—make clothing that people want to wear! Common sense is the most important thing to me.

Any other advice you dispensed?
I find some of the names to be difficult for global expansion, if they’re hard to pronounce. But that’s cultural; you don’t want to insult somebody and tell them their name doesn’t work.

What kinds of questions did you field from your mentees?
“I think I need to be more commercial, but how do I do that and follow my spirit?” I’d tell them to find the right combination. At the end of the day, you want to sell your clothing. There were lots of business-related questions too, and some designers wanted me to recommend public relations firms.

How well are Korean designers being exposed in New York, besides the Opening Ceremony orders and such?
The Concept Korea show is great to have in New York, but they should start to promote the brands by name. If they showcase the same three or five designers for a couple of years, it will provide some continuity. You want to know which designer you’re going to see;  It’d be interesting to see Concept Korea reinvented a bit, but I applaud [Seoul Fashion Week] for continuing to fund designers to come to New York every season.

Look Of The Daily: Reese Witherspoon In Calvin Klein Collection