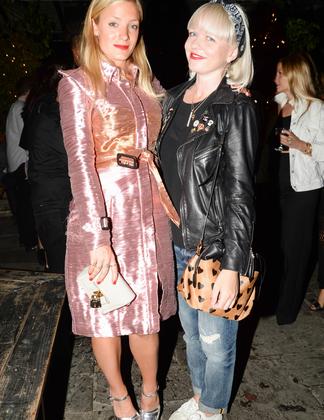 (NEW YORK) Summer is officially over, so now is the time to soak in as much rooftop time as possible! Burberry gathered quite the crowd to Gallow Green, a sort of garden bar perched atop the McKittrick Hotel for a drink or five and a live concert from musician Tom Odell. As part of Christopher Bailey’s continued initiative to infuse his designs with musical talent, last night’s event was the first in a series of live performances. Guests donned their Burberry best, from Kate Foley in a pink trench to Shiona Turini in her heart print top, which was also spotted on Edward Barsamian. Other guests included Leigh Lezark, Fiona Byrne, Genevieve Jones, Kate Lanphear, Perez Hilton and Tennessee Thomas. Following an abbreviated cocktail hour, guests were shuttled one floor down where Odell serenaded the room with his piano. The red curtain behind him finally opened, revealing a huge band behind him, complete with a trumpet, two guitars, a drummer, backup singers, and many more. We assume this is just a taste of what the Brit brand has in store for London!

Where Would You Jet Off to with...