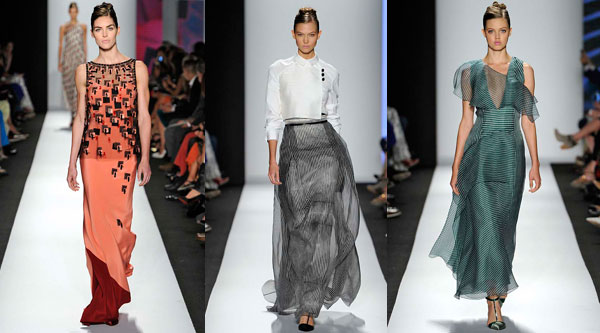 (NEW YORK) Carolina Herrera
Carolina Herrera‘s collections rarely have an overarching theme as pronounced as other designers, but that’s because she’s all about delivering classic chic pieces that an elegant klatch of loyal ladies will always feel good in. It’s not about trends, but this season graphic lines did play a big role throughout the collection. Herrera was thinking of Venezuelan artists Carlos Cruz-Diez and Jesus Rafael Soto, whose works deal with linear themes. The result? Subtly eye-popping gowns and dresses with a fully modern touch, that still certainly maintained Herrera’s classic appeal. Need we even tell you to get in line?

Donna Karan
Do you know the way to San Jose? Donna Karan does. While Karan may have been thinking about home with her Brooklyn-inspired DKNY collection, for her main line she was definitely dreaming of vacation. And who can blame her? The theme was decidedly Western, in navy, burnt orange and sand tones on everything from slouchy sweaters to one-shouldered caftan dresses. Accessories were a highlight with low slung belts and funny hats that were a cross between a cowboy hat mixed with a colonial style continental hats. Yippee-ki-yay!

Theyskens’ Theory
Quelle surprise! Color worked its way into Theyskens’ Theory this season, which was a departure from the typically monotone black, white, and grey for which the brand is known. There was pale pink, canary yellow, mint green, and magenta that closed the show in various layered column dress. And indeed layers were piled on throughout the collection. It was all about skirts worn over longer skirts, shorts worn over shorts, and crop tops worn over longer tops. Theyskens was able to tip his hat to grunge without tipping over.

The Row
Chic safari alert! The Olsen twins took us everywhere from India and Indonesia to the Saharan desert. Sunhats, caps, head scarves, and visors topped off looks like a burnt orange patterned floor-length tunic dress and an Eastern-inflected long sleeveless vest worn over an ankle-length skirt and adorned with tassles. The standout look? A zebra striped foor-length coat worn with ruffled cuffs, worn over an ankle-length white dress and a black sun hat with netting. Positively Out of Africa.