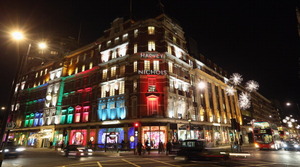 (NEW YORK) Harvey Nichols is taking on a longtime Burberry alum: Stacey Cartwright has been named the CEO of the U.K.-based department store chain. Cartwright departed from her position as CFO at Burberry in February 2013, after spending nine years at the label.

Speculation that Cartwright would land the top gig at Harvey Nichols has been brewing for months. Her predecessor, Joseph Wan, readied for his retirement last year, and will officially step down in March. During his tenure at the iconic luxury store, Wan expanded heartily; he launched stores across the U.K. and around the globe, setting up shop in places like Saudi Arabia, Hong Kong, Ireland, Indonesia, and Turkey. He is also responsible for introducing Harvey Nichols into the foodie realm by adding restaurants, food halls, and brasseries under the company’s umbrella.

Prior to joining the Burberry team, Cartwright was the executive director for three years at EGG PLC, an online financial firm based in London. She joined the company in 1999 as the CFO, a position she held for one year before being promoted. Before that, Cartwright was at Granada Group PLC and Granada Media as a director of finance and corporate development, and as a commercial director from 1995 to 1999. Cartwright will begin at Harvey Nichols on February 17th.

'Girls' Brings Brooklyn To Manhattan For An Eve