Anthropologie Gets Wilde With Yoana Baraschi 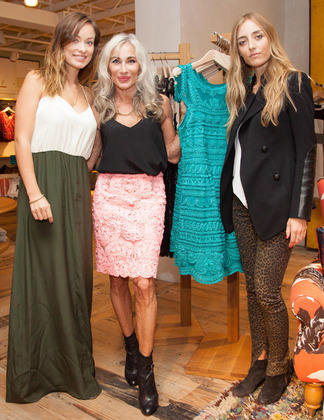 (NEW YORK) At Anthropologie’s Beverly Hills store, designer Yoana Baraschi celebrated the launch of her collaboration with Olivia Wilde and Barbara Burchfield‘s Conscious Commerce venture. The retailer will be selling Baraschi’s wildly popular lace tea dress with square cap sleeves, which has been tweaked with Wilde’s touches and will come in black, turquoise, and pink and retail for $298 (if you’re in New York, check it out in the window at Rockefeller Plaza). The dress will be sold as part of an 11-piece capsule collection for the retailer in honor of Baraschi’s 10 year anniversary. Anthropologie and Baraschi will be donating 100 percent of the proceeds to fund a girl’s school called NEW LIGHT in the red light district of Calcutta, which was founded by Urmi Basu to help young girls avoid the sex trade and to care for those suffering from HIV and AIDS.

Baraschi herself has made over 80 trips to India, where she gets many of her signature embroideries made. “It has always been a dream of mine to find like-minded partners that are interested in bringing awareness to women’s issues in the world today while creating a more conscious way of doing commerce,” said Baraschi. Wilde and Burchfield’s business was founded as an alternative to fundraising by melding shopping with charity. The “do good” duo seek out collaborations with designers and pair them with underserved organizations in areas of need to promote consumerism for a cause.

On hand to celebrate with Baraschi, Wilde, and Birchfield were Gillian Zinser, Maggie Grace, Dianna Agron, Dawn Olivieri, Morgan Marling, and Erik Kopeloff, to name a few. Guests sipped champagne and mingled in the store as they rocked out to music provided by DJ So Super Sam. As for how the dress has been received so far Baraschi said, “The customers have embraced the partnership and, as a result, sales of the dress are very, very pleasing.” Bravo!