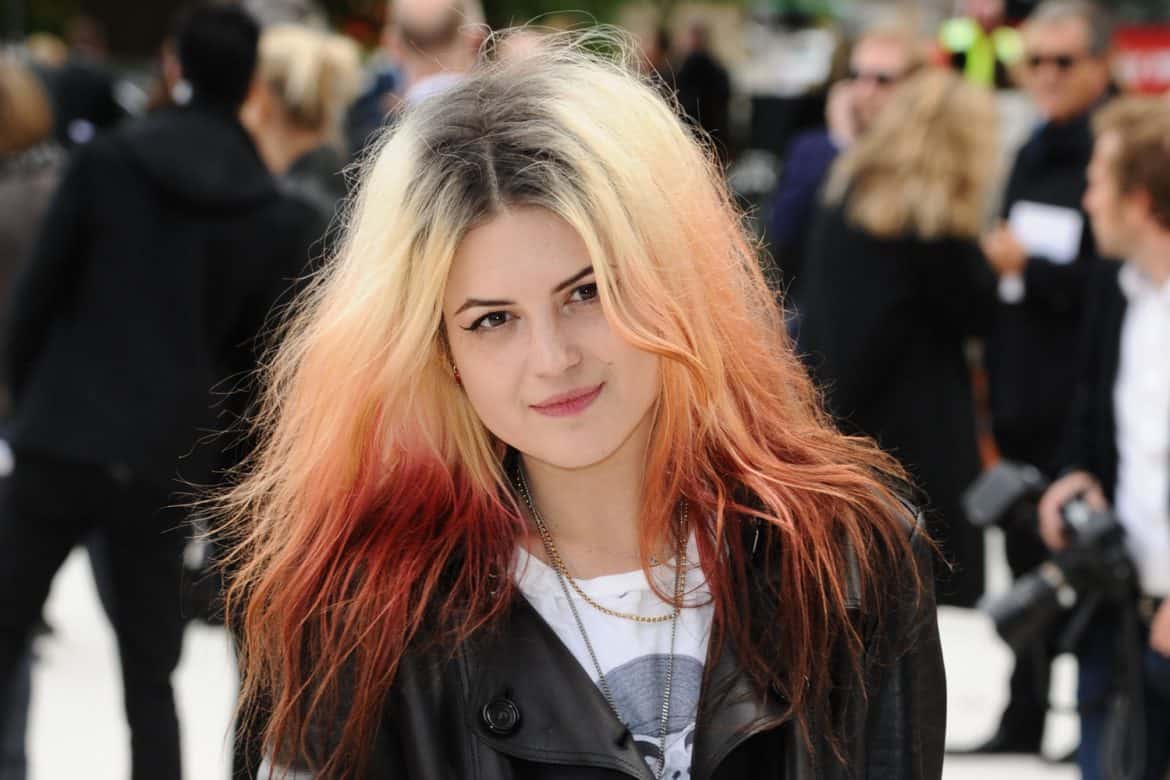 Musician and artist Alison Mosshart has had a busy few years touring with her band, The Kills. Yet she somehow found time to co-paint a new show — Los Trachas, on now at the FF-1051 Gallery in L.A. — with actor and painter Danny Zovatto. Below, Mosshart explains how the show came to be, what it was like painting with another person, and if she has any new music on the way.

Tell me about the show! How did you and Danny get started?
The show kind of started conceptually as Danny and I painting together in a studio. Something neither of us had done was paint with another person in a studio to make a show. The goal was intended to paint a show, not just make paintings. We started with that. Danny had been given tons and tons of used canvases. Canvases from some person that had painted all over them. We figured, that can be our starting point. We’ll basically blank them out and start over again on all of these canvases. We just brought everything from our houses into the studio, and started making stuff. So there’s every kind of thing in the paintings. There’s collage, there’s oil, there’s acrylic — every kind of crayon, pen, marker. And conceptually aside from them being painted in the studio space that we were going to show them, it was an L.A. show. So it was about our surroundings and that city. 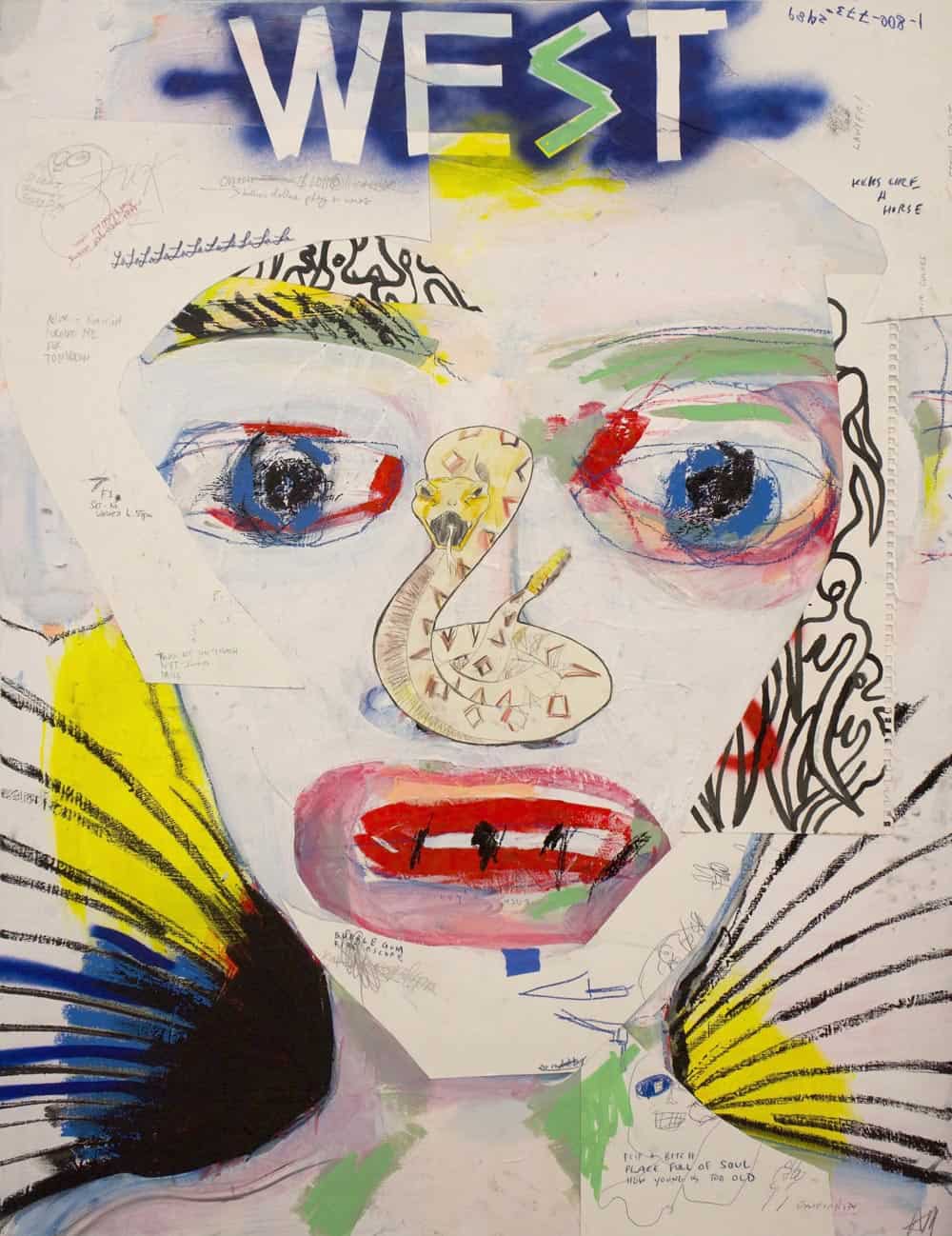 How did you and Danny meet?
We were both in New York, and another friend of mine had a studio at the time on the Bowery, and he invited us over to paint. So we went a couple of nights in a row, and painted really late at night. That’s kind of how we met. We started painting. It was really fun to paint with each other, which is where we got the idea of doing an actual show, going back to L.A. and really doing it.

Tell me a little bit about painting with another person. What was that experience like?
It was fun! Painting is such a solo experience, generally. You go into a weird space in your own head, and your own music and stuff, and you don’t talk for many, many, many hours straight. But this was a really fun, kind of freeing experience. It was nice to have another person there to be like, is that working? What does this need? We were doing that for each other for each of our paintings, and passing colors to each other. Someone would mix something great and you’d be like, “Oh, I need some of that!” There was a camaraderie, a togetherness in making the work. Even though I didn’t paint on his, and he didn’t paint on mine…it’s interesting to me to see how that show turned out. For me I can see both of our painting in both of our paintings, strangely. I don’t know if someone walking in there can. But because of the experience of it, I know how every single thing in there was made. It was an interesting experience. I’d love to do something like that again. 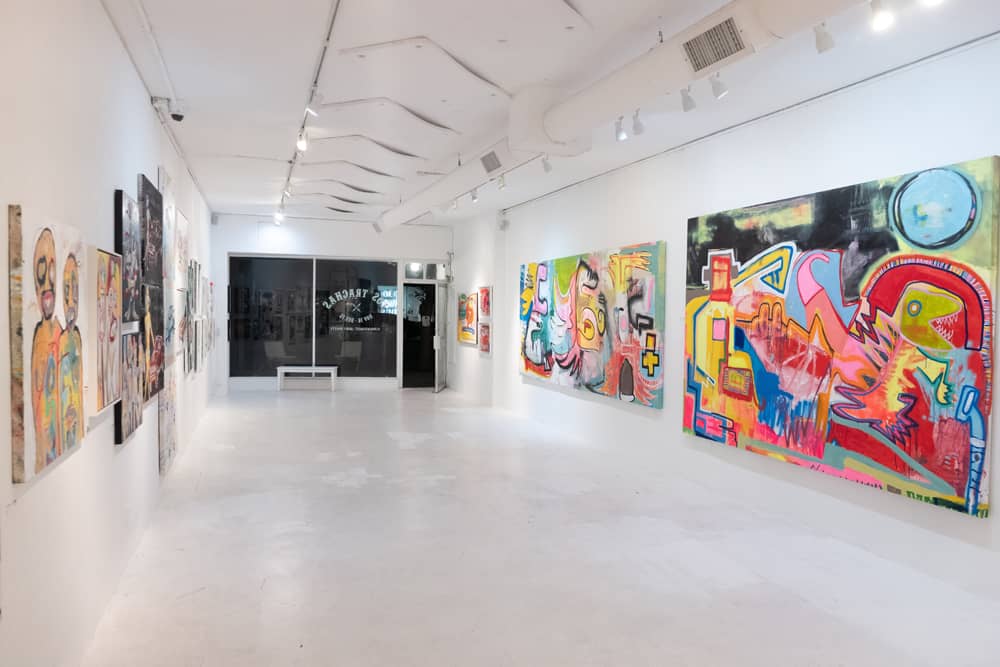 Tell me a little bit about FF-1051 gallery — how did you get involved with them?
Holly [Purcell, director of FF-1051] is a friend of mine, and she’s part owner of that gallery. I met Holly a number of years ago in Los Angeles when Jamie [Hince, of The Kills] and I were renting a house to build a recording studio and make Ash & Ice. We wanted a different studio experience, so we were just going to kind of build this makeshift studio — rent the house, build a makeshift studio, write the record, and then tear down the studio. She’s a realtor, so I met her through that. And she was also really in to art. I’d done art shows before meeting her, and she knew about my work. She’d come over, we’d hang out. She was buying work from me for clients of hers, and I know that was her dream, she always wanted to open a gallery. And she did! She did last year. 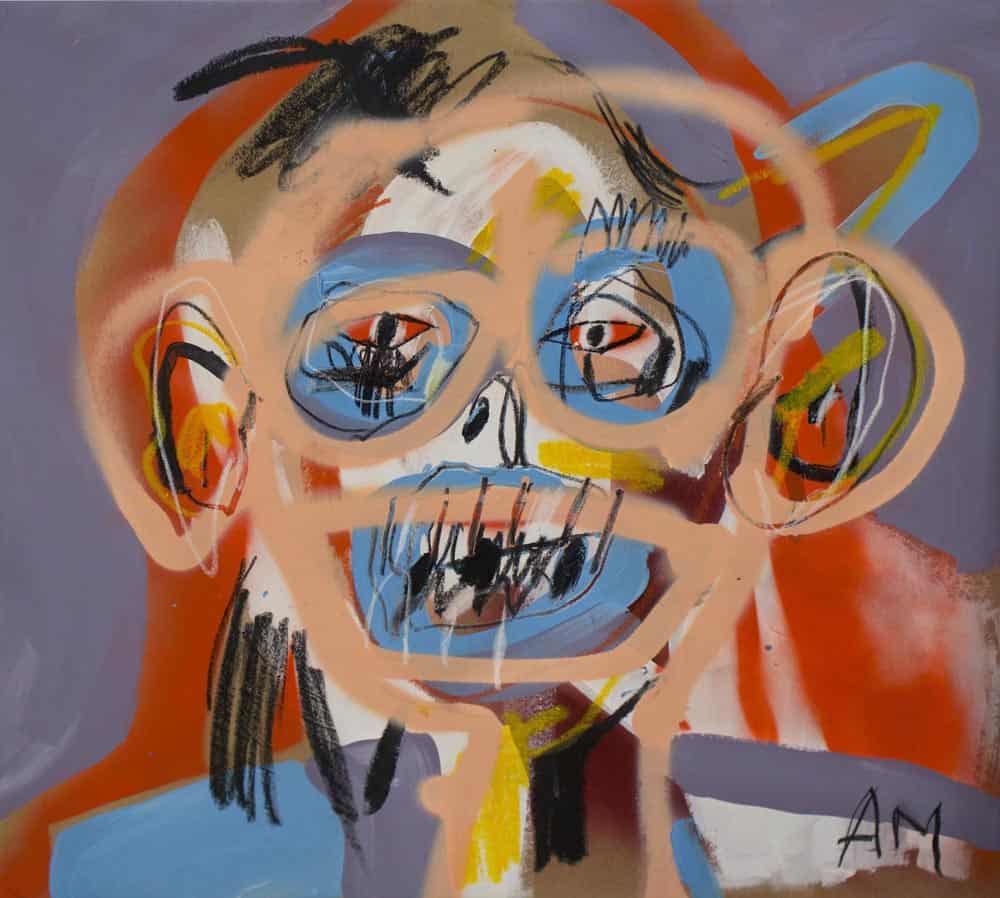 When Danny and I had the idea for this project I approached Holly because she’d been such a supporter of my work. And she was in L.A., and we wanted to paint it in L.A. She was super excited, she just gave us the keys to this space and we just kind of didn’t leave. That was the only time I’ve ever painted a show inside the show, strangely. That room took on many forms…it looked like a rainbow in there. Every surface was covered, every bit of the floor. We plastic and papered every bit of the whole thing, and then ripped it all down and hung the paintings. [When we were done] it was all neat and tidy, which is a miracle. It was a cool experience!

Do you collect art? What’s your personal collection like?
I do a little bit. I wish I could collect more, but art is expensive [laughs]. I love it. It’s my favorite thing to buy. I don’t get to do it very often. But I have one painting that is my pride and joy. It was my very first real art purchase I ever made, about 10 years ago, and it was when Don Van Vliet was still alive. He’s the singer of Captain Beefheart, and he’s a painter. He’s been a massive influence on me as a painter and a musician for as long as I can remember. I always, always wanted to own one of his paintings. So I saved up for a number of years, and went to the gallery that represented him, and they were so kind. They pulled out tons of works on paper, and things a little bit more in my price range. I have one of his paintings and I’m so glad I do. I look at it and it makes me incredibly happy. 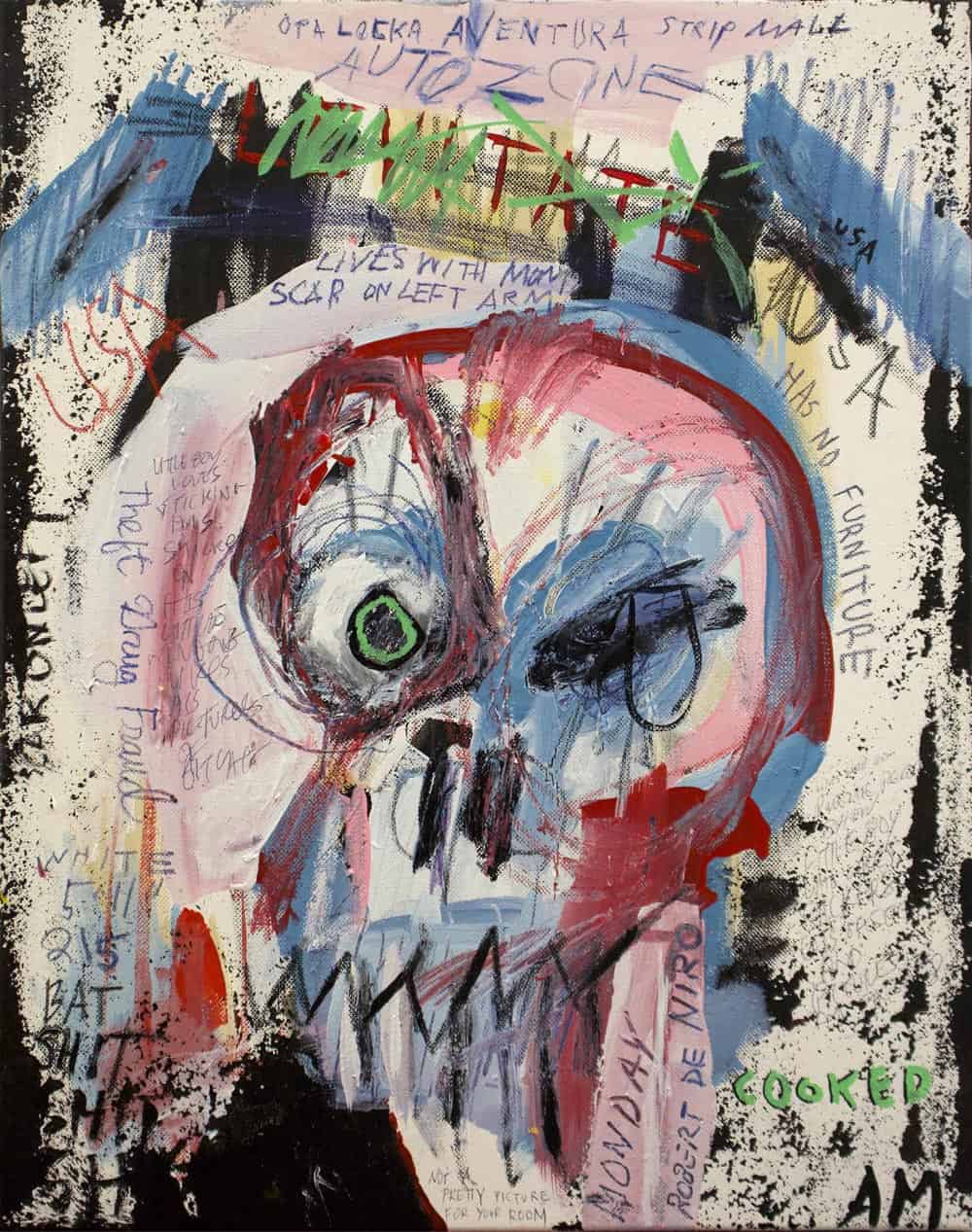 Monday in the USA (Alison Mosshart)

Are you working on any new music?
That’s the next thing. Jamie and I just got finished three straight years of tour. We literally just finished not even two months ago. It all kind of coincided with this art show which I was painting on the last fifth of that tour. We were going to take the winter (Christmas, New Years) time off, and then begin writing the next record.

Do you have any holiday plans?
My parents are coming to visit me in Nashville. I’m very excited about that! I haven’t seen them in a little while. I think I’m just going to stay home. I’m really excited to be home. I’ve been around the world 600 times, it feels like, recently. If someone told me I had to go to the airport in a week I think I would start screaming. I’m really happy to be home. It’s nice, when I’m back in my studio here, and I’ve got my guitars, and I have my paints, and I feel like I have everything I need. I just want to be in one place for at least a month or so. It should be really nice. 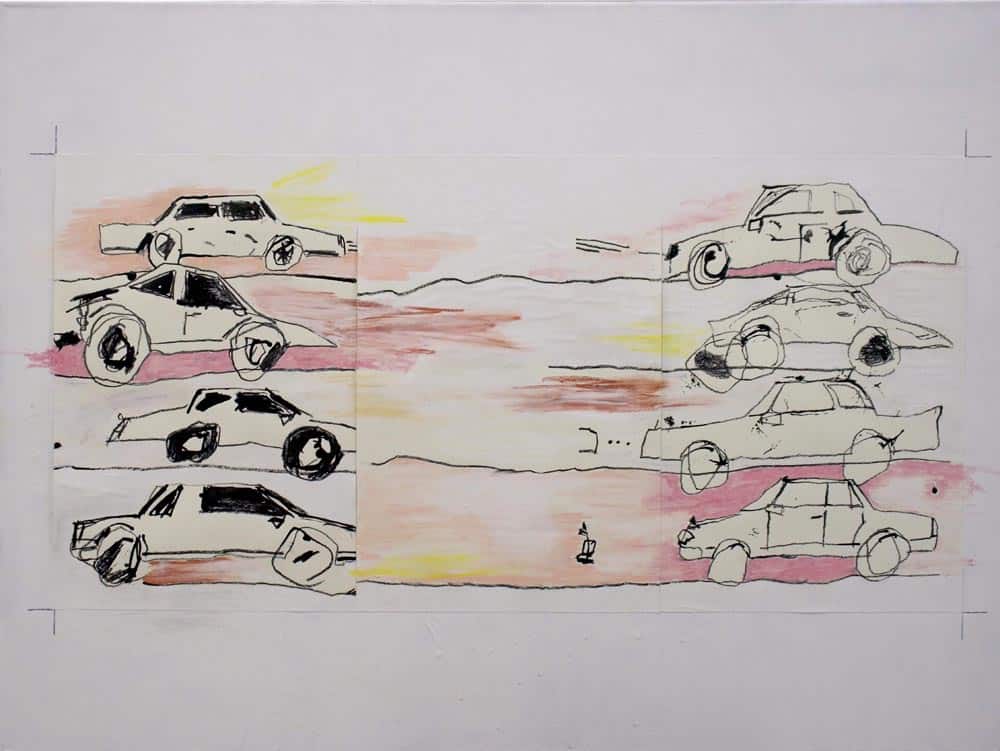 Los Trachas is on view now at the FF-1051 Gallery in Los Angeles, and runs until December 31.

The New HG Contemporary Exhibit Is Off...

The Definitive Guide to Art Basel 2017