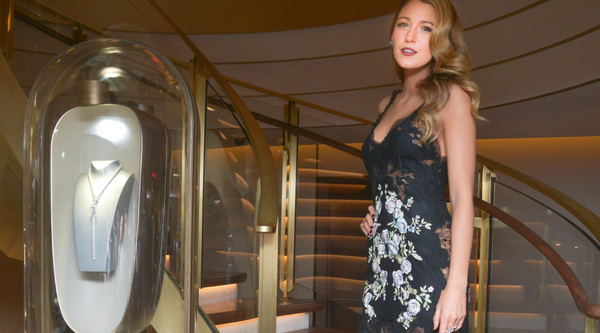 (NEW YORK) Van Cleef & Arpels’ iconic flagship on Fifth Avenue underwent a major makeover and expansion recently, so there was plenty of reason to celebrate their new luxurious maison last night. Nicolas Bos, the brand’s creative director and CEO, and Alain Bernard, president and CEO of Van Cleef & Arpels of the Americas were on hosting duty inside the new space. The crowd also included Blake Lively and Dita Von Teese, the latter of whom was decked to the hilt in a Carolina Herrera gown. Mid-party ballet dancer Justin Peck gave a private performance curated by Benjamin Millepied for the brand. A natural fit, given the jeweler’s ties to the art of ballet, including a 1967 ballet created by George Balanchine based on the house’s gems.

In conjunction with Van Cleef & Arpels, Millepied is in the process of creating a three-act ballet in tribute to Balanchine. The first act was unveiled last May at the Chatelet in Paris, and the next two will be devised over the next couple of years. “Claude Arpels was a huge fan of ballet. He was a great supporter of The Met and The Metropolitan Ballet. Balanchine was the head of The Met in the Sixties, Claude Arpels met with him, and they became friends. Balanchine had the idea to create the ballet, and its still a very important part of the contemporary ballet repertoire. It’s considered one of the first abstract ballets,” said Bos. “It’s a relationship that we’ve always continued and we continue to make ballet-inspired designs, whether as a brooch or a watch.”

As for the store’s modern update, the space has expanded to cover three floors: the ground floor will house the sales floor, the second is dedicated to bridal and bespoke offerings, connected to the first floor via a spiraling staircase, and the third level is home to chic conference room space for presentations, dinner parties, and special clients. The space was designed by Patrick Jouin and Sanjit Manku of Paris’ Jouin Manku Studio, but the interiors were predominately crafted using materials from U.S. and New York-based artisans like Savoy in Seattle and Jaroff Design in New York. The redesign took somewhere between a year and a half to two years according to Manku—and the store stayed open throughout construction! “It was really complicated to design and build the store while they continued to have an address,” said Manku. “Every time we work with Van Cleef, it’s tempting to just have it done in Paris and then ship it over, but then you’re never really integrating or doing something for the artists here. So for us it was really important to find local artisans; it takes time to find them.”

The store is still connected to Bergdorf Goodman via a side door, so if you find yourself doing a little holiday shopping at Bergdorf’s on Fifth Avenue or simply checking out the windows, be sure to step in and take a peek. Don’t miss the archival library on the second floor that details historical client purchases. And of course, try on some jewels while you’re at it, darlings!
PAIGE REDDINGER

A Lacy Evening At La Perla With New Yorkers For Children