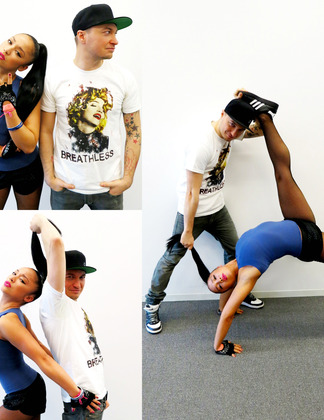 Dashing from a Cosmo issue close to a Passover seder, some quality time with someone who’s gotten quite sweaty with Madge, and music recs galore: the only thing missing from Sergio Kletnoy‘s weekly musings and escapades is his boss Joanna Coles (she’s on vacay). On to the good stuff!

Monday
Forgive me father for I have sinned. On the first day of Passover, one of the holiest of holidays, I’m behind my desk working on Cosmo’s upcoming issue. If this isn’t dedication, I don’t know what is. Not that I couldn’t take off, considering THE BOSS is out this week. I must do better next time and at least pretend to observe the rituals set upon my people 3,000 years ago! In honor of this holiday I decided to make a playlist filled with some of my fave Jewish singers. There’s more to us than “Hava Nagila”. Some of the biggest musicians in the world are my fellow brothers and sisters: Paula Abdul, Leonard Cohen, Taylor Dayne, Neil Diamond, Serge Gainsbourg, Haim, Billy Joel, Amy Winehouse, Barry Manilow, Jessie Ware, Bette Midler, Mark Ronson, Barbra Streisand and P!nk, although I’m still waiting for Leonard Cohen to rock a yarmulke at one of his concerts. Later that evening I rushed over to my friend Tara Lowenberg’s (the one who always wants me to mention that she’s the skinny one) for a Passover feast. Upon entering her apartment, she blurred out “Don’t eat the brisket in the first dish, it’s burnt and tastes like leather.” To which I replied: “Haven’t my people suffered enough? Couldn’t this be the one day when everything is just right” Thank God the rest of the meal was delish: pot roast with potatoes and carrots, noodle kugel, roasted Brussels sprouts, mixed greens with clementines and almond slivers, and potato latkes with sour cream. After dinner I went home and said a little prayer for my fellow Jew, Amanda Bynes…L’chaim!

Tuesday
After last night’s huge Passover meal, last thing I needed was a box of Sprinkles cupcakes waiting for me in the morning. Especially when these cupcakes came from Madonna’s personal trainer Nicole Winhoffer. One would think that a personal trainer, who trains THE QUEEN for 2 hours a day, 6 days a week for the past three years would be dead against any sweets or junk food. Maybe this was Nicole’s way of testing me, to see if I would give in to temptation. Or maybe she just wanted me to get really plump and then get me as fit as Madonna. I’m hoping for the latter. When Nicole came by Cosmo a few weeks ago, we got along famously. She taught me moves from her “Addicted To Sweat” DVDs (I could barely keep up), I drilled her on what music Madonna listens to while working out (lots of hip-hop and dance remixes, sometimes even her own), offered to make a playlist for one of these sessions (made one that very evening) and posed for a series of photos with Nicole and her I Dream Of Jeannie ponytail (including a photo of Nicole with Madonna’s first ever Cosmo cover back in 1987). My one wish is to witness one of these M&N two hour workout sessions, even if just to DJ… I would even be willing to stand in the corner fetching towels and serving them water. Or just observe. Fingers crossed.

Wednesday
I’m a huge fan of Eminem and patiently counting the days until new music drops from one of my fave MC’s. So when I got an email from a publicist asking me to meet with Em’s new protégée, a five-time Grammy nominee, singer-songwriter Skylar Grey, who co-wrote Em and RiRi’s opus “Love The Way You Lie”. Skylar also collaborated with Linkin’ Park’s Mike Shinoda, Dr. Dre, Lupe Fiasco and Diddy (all before releasing a debut album), so I dropped everything I was doing and jumped at the chance to see first hand what all the hype was about. I was instantly hooked to the five songs her publicist played for me prior to our meeting. Skylar’s voice and the mix of hip-hop, rock, country reminded me of Suzanne Vega with a hip-hop twist, which Grey took as a major compliment, and added that she sees her music somewhere between Dido and Alanis Morissette… Of course, having Eminem as an executive producer on your album and drop a verse on your debut single helps, but it’s pretty obvious she’s more than capable of standing on her own two feet. Skylar’s album, “Don’t Look Down” will be out in the summer, until then, you must listen to her killer single “C’mon Let Me Ride” featuring Eminem and the just released “Slowly Freaking Out” from the soundtrack to “The Host”. Plus, for anyone bad ass enough to admit loving Eminem, Radiohead, Fiona Apple and Spice Girls and calling her personal style “ax murderer chic” is definitely a-OK in my book…

Thursday
While on my third cup of coffee in the kitchen area of the Cosmo floor, a familiar face passed me by. I did a double-take and realized that I was in the presence of Natalie Dormer, aka Anne Boleyn of The Tudors aka Margaery Tyrell of Game Of Thrones aka Elizabeth Bowes-Lyon from Madonna’s W.E.!!! Of course I had to stop her, snap a few photos, and ask her what she was wearing. It was like a scene straight out of Joan and Melissa’s E! Red Carpet coverage: “Natalie, what are you wearing?” Her response: “Pants by Rag & Bone, top by The Kooples, coat by Theyskens’ Theory and booties by Sigerson Morrison.” So chic! The rest of the day I kept thinking about all of the Madonna-related questions I should have asked, but didn’t. After work, I zoomed over to The Standard for a very fashionable dinner with my friends: E! Fashion Police and Marie Claire’s Zanna Roberts, Moda Operandi’s Taylor Tomasi-Hill, The Eighth Floor’s Matthew Marchak, Marie Claire’s beauty director Erin Flaherty, and One Model Management’s Jeremy Spears. Like a scene out of Zoolander 2, it was truly a sight for sore eyes…

Friday
Obsessed: “Habits” by Tove Lo; “Glowing” by Nikki Williams, “Julian” by Say Lou Lou; “Sacrilege” by Yeah Yeah Yeah’s; “End Of Night” by Dido; “The Conversation” by Texas; “Juice” by Kaptn; “It’s A Beautiful Day” by Michael Buble; “Chelsea Hotel No 2” by Lana Del Rey and “Imagine It Was Us” by Jessie Ware. Imagine the tunes, have a blast this weekend and catch me on Twitter until next week at @SergioKletnoy!

Diane von Furstenberg Is On The Mend After Ski Accident