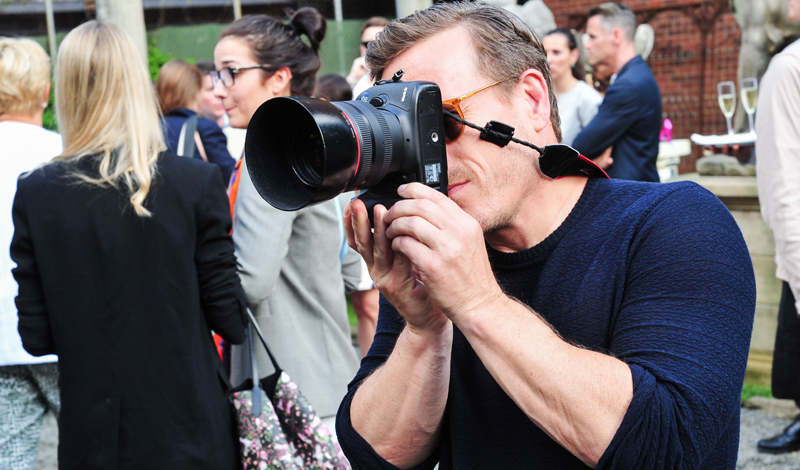 Blogger and photographer Scott Schuman was at Pitti Uomo in Florence today to launch a new project, “Faces by The Sartorialist”, which is an ongoing collection of shots he’s captured of people on the street worldwide wearing eyeglasses. The photog showed off his work today of new and old subjects wearing specs at an event at Giardino Corsini and told The Daily why eyewear has caught his eye.

How did this come about?
I’ve been coming to Milan so much and have been talking to Luxottica for so long about doing something together. We wanted to do something based on portraits that I take, but not like what I did with Burberry. A lot of the images are from the archive. There’s only a few that are new and shot for this project, but this will be ongoing. The new ones are going to be close portraits, which is why we called it “Faces” instead of some clever named like “Eye Will Be There”. It’s about how optical and eyewear can help enhance a person’s face. There were no restrictions and you don’t get that kind of freedom very often.

Are you running around looking for people wearing glasses to shoot now?
Yes! It doesn’t change the way I shoot, but if I see someone and I get a good portrait, it’s probably going to go to Luxottica first, but it doesn’t change my day-to-day shooting.

It’s very cool that they don’t have to be Luxottica glasses on your subjects.
Isn’t that cool? They wanted to be hands off and gave me a lot of freedom. In emerging markets, a lot of people don’t even wear glasses. Part of this is for people to look at this and think, ‘Glasses are kind of cool!” I was just in Peru and they don’t even wear sunglasses there, and it’s crazy bright!

Will the images also be on The Sartorialist?
No. I don’t want anything that’s under the table on my blog. Any time I work on a [side] project, I tell them that we have to build a different site. It keeps my site clean.

Why is that important to you?
One of the reasons is that I can do that. A lot of style bloggers can’t. Their only thing is putting on clothes on their site. That’s created a controversy and makes people wonder if it’s really their own clothes or if it’s a paid thing. I don’t have to worry about that. The integrity to what I do is important to me, and I’ve got the ability to be able to still make money and shoot for someone else as a photographer. My site has always been about mixing fashion and cultural shots.

What do you consider your niche in this ever-expanding blogosphere?
My niche is about shooting fashion in Milan and Paris at a very high level and I’m going more and more to places like Peru and Morocco for cultural shots. Those are more like Steve McCurry‘s, or a cultural shot. Nobody’s done quite this thing. Bill Cunningham is great, but he hasn’t done anything quite like that. Not that it’s better or worse, but if I can look back 40 years from now and have something different in my catalog, I’ll be pretty proud.

What are your summer plans?
After the Paris shows, I spend a month in Milan, and then I spend a month in Italy traveling around shooting. It’s my summer [paying homage to] [photographer] Slim Aarons. I’m going to be going up and down the coast. Then I’m coming back to New York when my kids are back from camp so I’ll spend some time with them and then we go to Ibiza. Hopefully by September my hair is going to be even longer, I’ll be really tan, skinny, and have a grown a beard. Actually…I can’t grow a beard. It’s going to be a fun summer.