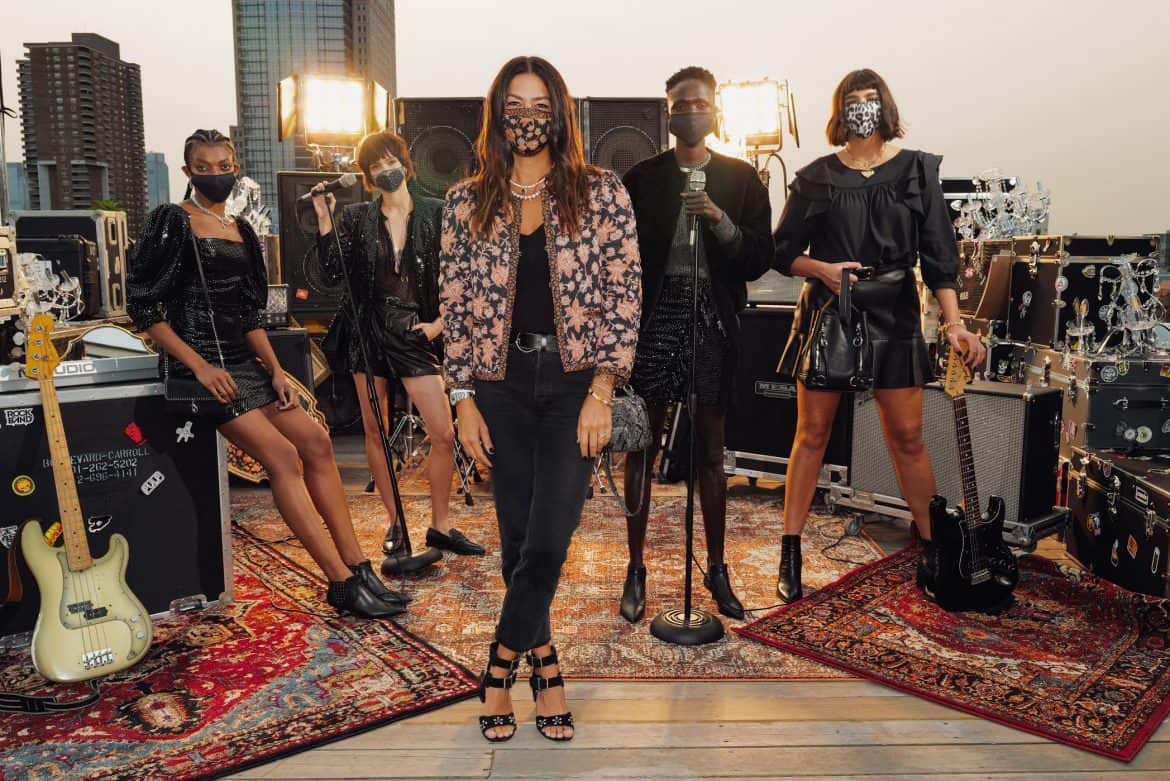 Rebecca Minkoff is celebrating two milestones in this unforgettable year. She’s turning 40 and celebrating the 15th anniversary of her namesake brand. We recently got on the phone with the designer to reminisce about the early days of her brand, see how she’s faring in a COVID world, and find out what she’s got cooking for NYFW.

Happy anniversary! What are your plans?
I can’t have a 40th-birthday party, and I can’t have a party for my 15th anniversary. So in lieu of a party…our plans are to celebrate Fashion Week, which has been a huge topic of conversation. Are you in? Are you out? My general sentiment is we have to get back to business. There’s a way to do it safely. New York needs fashion from an economic perspective. The fashion industry needs it from a community perspective. I’m working with Lowe’s, who is helping bring the shows to life. Digitally, there will be a video that will be fun and in the moment.

Are you doing a presentation?
We’re doing a presentation-style format on the rooftop of Spring Studios on September 15th, from 5 to 7 p.m. Lowe’s wanted to participate in Fashion Week because fashion, now more than ever, has been taken into the home. Jason Wu, Christian Siriano, and I will be using a lot of Lowe’s home products within our activations. We’re curating items that will be shopable. As people re-create their homes to be their offices, that’s how the partnership has been tied together. The theme of my collection and how it will be shown will very much be what I stand for as a brand. The collection is all about rock ’n’ roll. 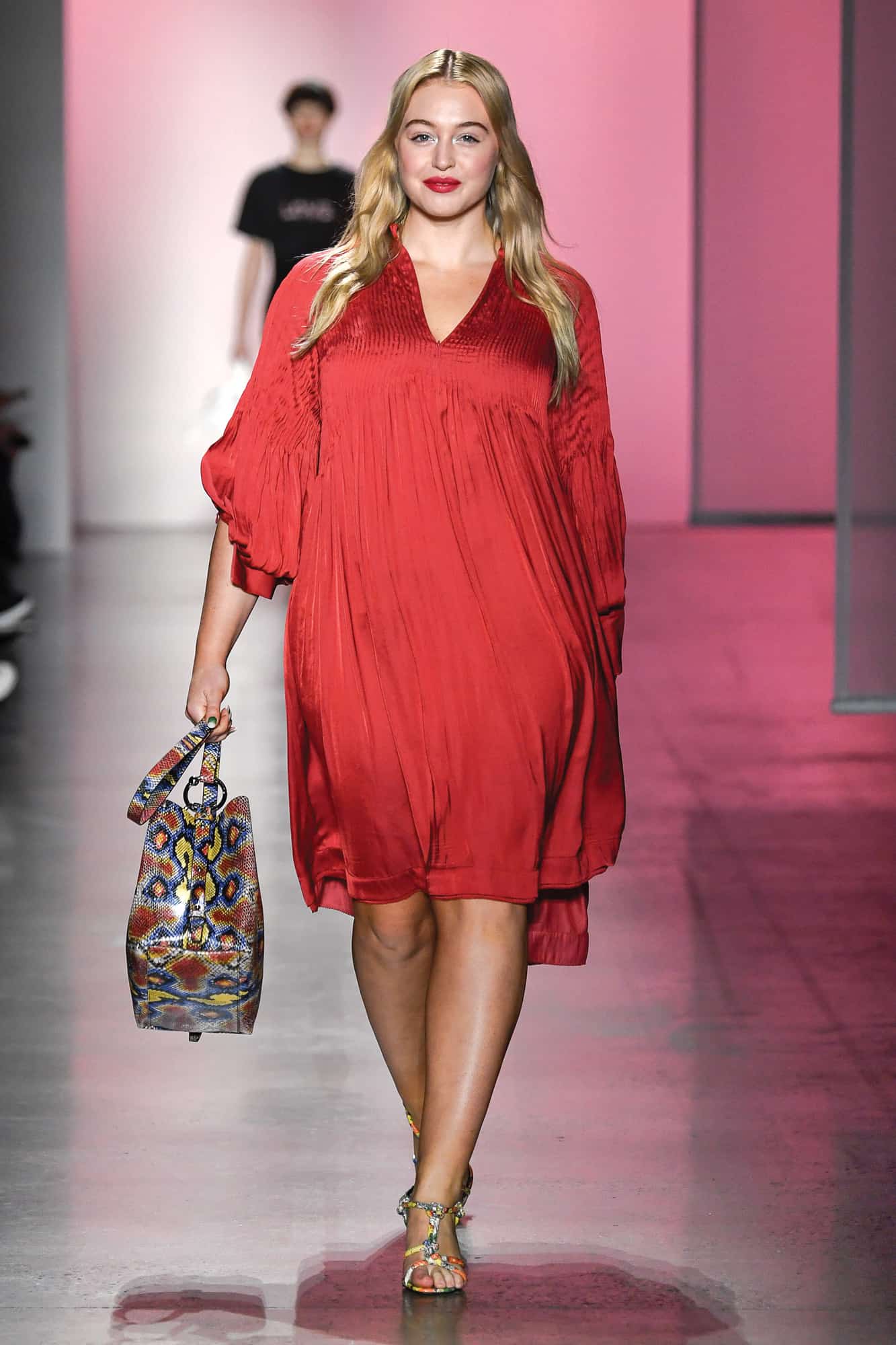 Let’s go back in history! How did the brand get started? We remember there’s a Jay Leno connection.
I had been at an artist convention in the Bahamas, and I loved all the touristy shops with these cut-up T-shirts. I came back and made one for myself with an “I Love New York” logo. My sister-in-law fell in love with it, and she wore it out to dinner with Jenna Elfman, who was on Dharma & Greg at the time. Jenna wanted one. She was on The Tonight Show with Jay Leno in 2001 when he asked her about it. She said, “My good friend Rebecca Minkoff made it.” The shirt ended up everywhere, over and over again. For nine months, I would go down to Canal Street on my bike, negotiate with the guy to buy T-shirts, and brought them to one of the few e-commerce sites at the time. I donated what I could to the Red Cross, and I kept the rest to buy ramen and not pay rent!

Then, handbags put you on the map.
Jenna asked me if I did bags and I lied to her and said, “Of course I do bags!” I went back to the city and found a factory that was making the most well-known contemporary brands. They made a sample and I walked around with it and enough people stopped me that I thought, “There might be something to this.” A friend of mine was the buyer for a boutique in L.A. that was known for curating cool brands. She wanted to buy 12 as a test, and she said she’d have her friend write about it for DailyCandy. The article hit, and it was f**king crazy! I got e-mails from boutiques and stores and magazines. That was the beginning! 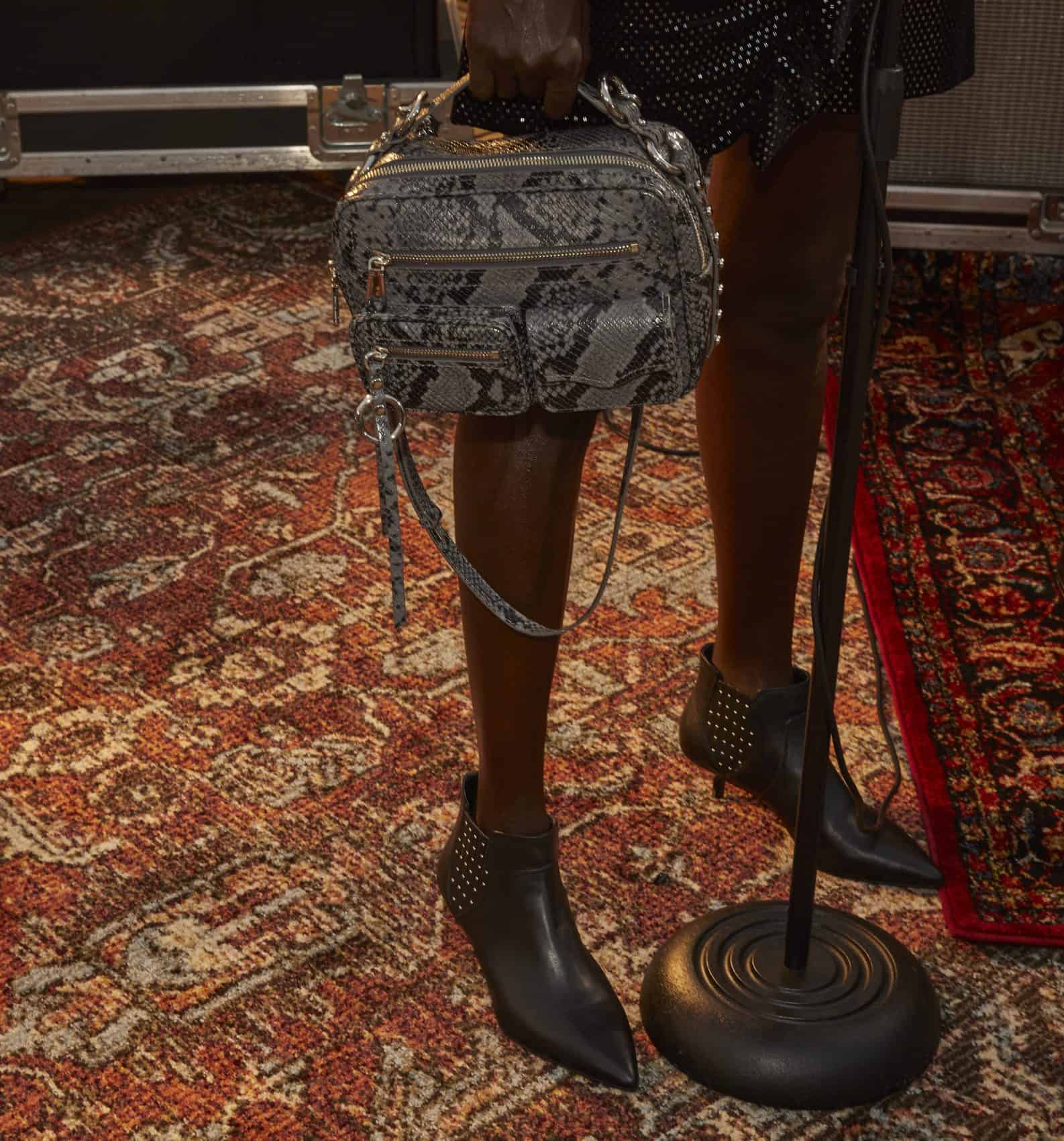 How did your brother, Uri Minkoff, get involved in the brand?
He came into play when he first loaned me the money and then started asking me business 101 questions, like “Do you have a tax ID?” and “Do you have a separate bank account?” He started with loans, and then he began to fly up each month. The numbers started growing rapidly. We couldn’t get a loan, and we couldn’t get an office. No one would believe in us. Venture capital and private equity wasn’t a trend then. He said, “I guess I’ll fund this on my Amex!” He started getting more involved; he mortgaged his house and maxed out his credit cards. When we could see that this was truly becoming something more than we could have imagined, we said we’ve got to get some adults in here. We hired our first president, and she took over the sales and some of the stuff that I didn’t know how to do. We had a deal that when we hit $10 million in sales, Uri would move here from Florida. It was getting too scary. When we hit $20 million in sales, he moved his whole family up and sold his other business and dedicated himself to work full-time.

What’s it like to work with your brother every day?
What’s ironic is that we were the ones who fought the most growing up. We have a middle brother, who we both mutually get along with. The fact that we worked together and hated each other for a lot of our youth is funny. We spent the first few years respecting each other’s lanes. As the business grew and got more complicated, we started going into each other’s lanes and that’s when the sparks flew. We would fight and not speak to each other for weeks on end. We finally found a business couple’s coach who would sit down with us once a year to air all our grievances and adopt rules. You can’t bring your sibling [relationship] into the business. That changed our dynamic and relationship. We haven’t had a fight in two or three years. We’re mature and respectful. We feel free to disagree with each other. Especially now, we can’t afford to not agree. It’s already stressful enough with the pandemic.

You launched a fragrance this summer. What does it smell like?
The notes are a nice mix of coriander, tobacco, and vanilla, with little hints of a leather smell. We built a beautiful-smelling fragrance that’s vegan, sulfite-free, cruelty-free, using recycled glass, recycled plastic, and recycled paper. We have a refill program, so you never have to throw away the bottle. Our brand aesthetic is about this bohemian rock, so I wanted the scent to have that duality. It’s not a scent you’re going to smell before the man or woman walks into the room. You’re gonna smell it when you go in for an embrace. That was key to me. 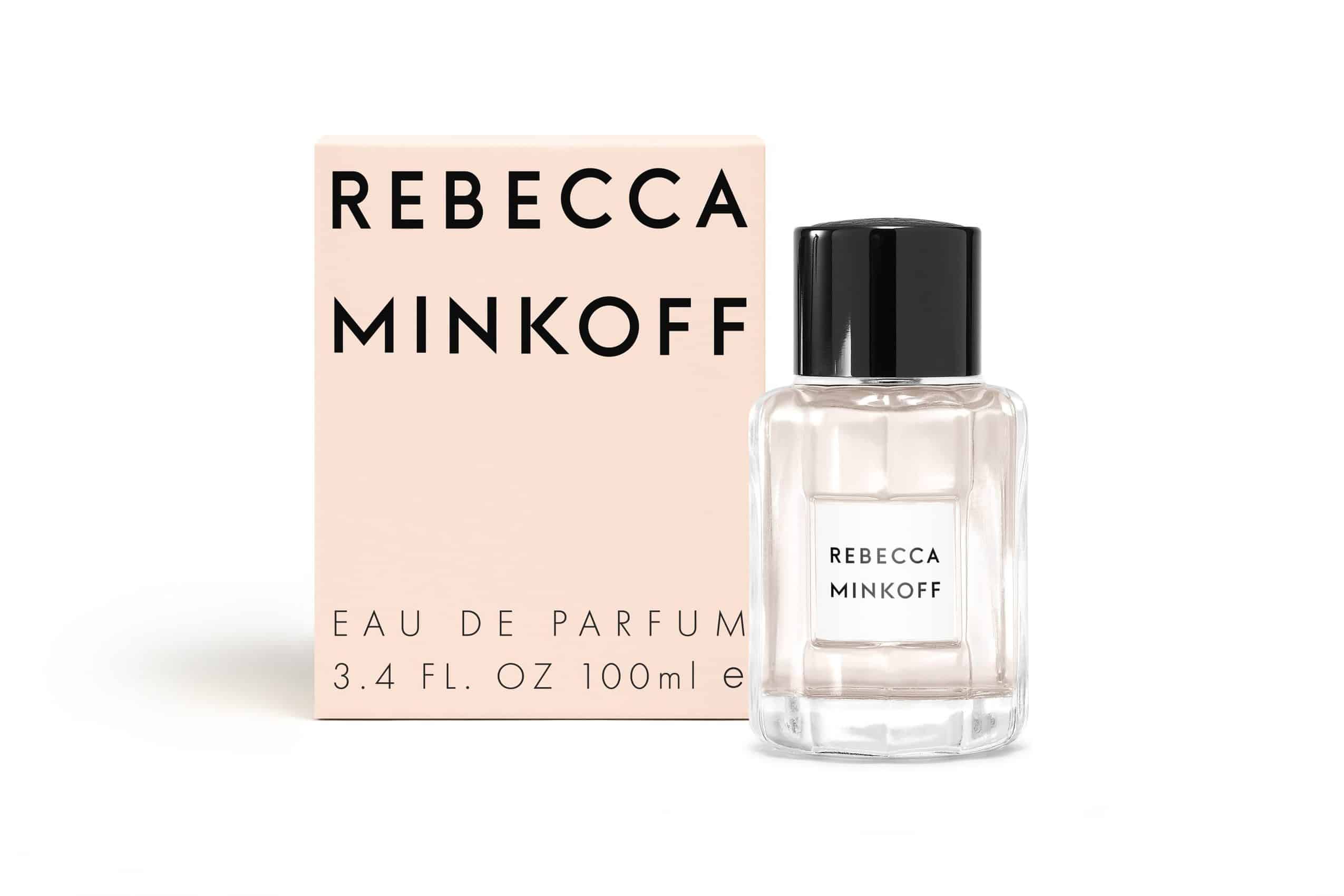 You’re doing the 15 Percent Pledge. Can you tell us what that is and why you wanted to do it?
After George Floyd was murdered, I was trying to figure out how I could help and support. For me, it’s about getting money into marginalized communities and people. If they’re smart, they will do things with it and thrive. They will change their economic outcome and the outcome of others. When I saw Aurora James’ post [designer James issued a call to major store chains to dedicate at least 15 percent of their shelf space to black-owned brands], I thought, “Perfect, I can get behind black-owned female-owned businesses. That’s something I know will help them lift up other people.” We have more than 50 percent of representation on our site of black models. I’m interviewing black women on my podcast. It’s not just a brand saying, “Here’s our black model!” How can you support and give more money to these businesses? Once we reopen our stores, we will further integrate that. At any time across my entire brand, 15 percent of the money we’re spending is going to black business.

You were an early adapter to the digital world. How did you know this was going to be the future?
I don’t think we knew at all. We knew we weren’t the anointed ones. Back then you rose to fame that way or through Barneys making you cool. The only way we existed was because of our consumers. When I realized there’s a forum and a bunch of women talking and I can talk back to them, why wouldn’t we do that? I didn’t have big budgets to do magazine advertising. Paid social wasn’t a thing, but we could talk directly to our consumers. 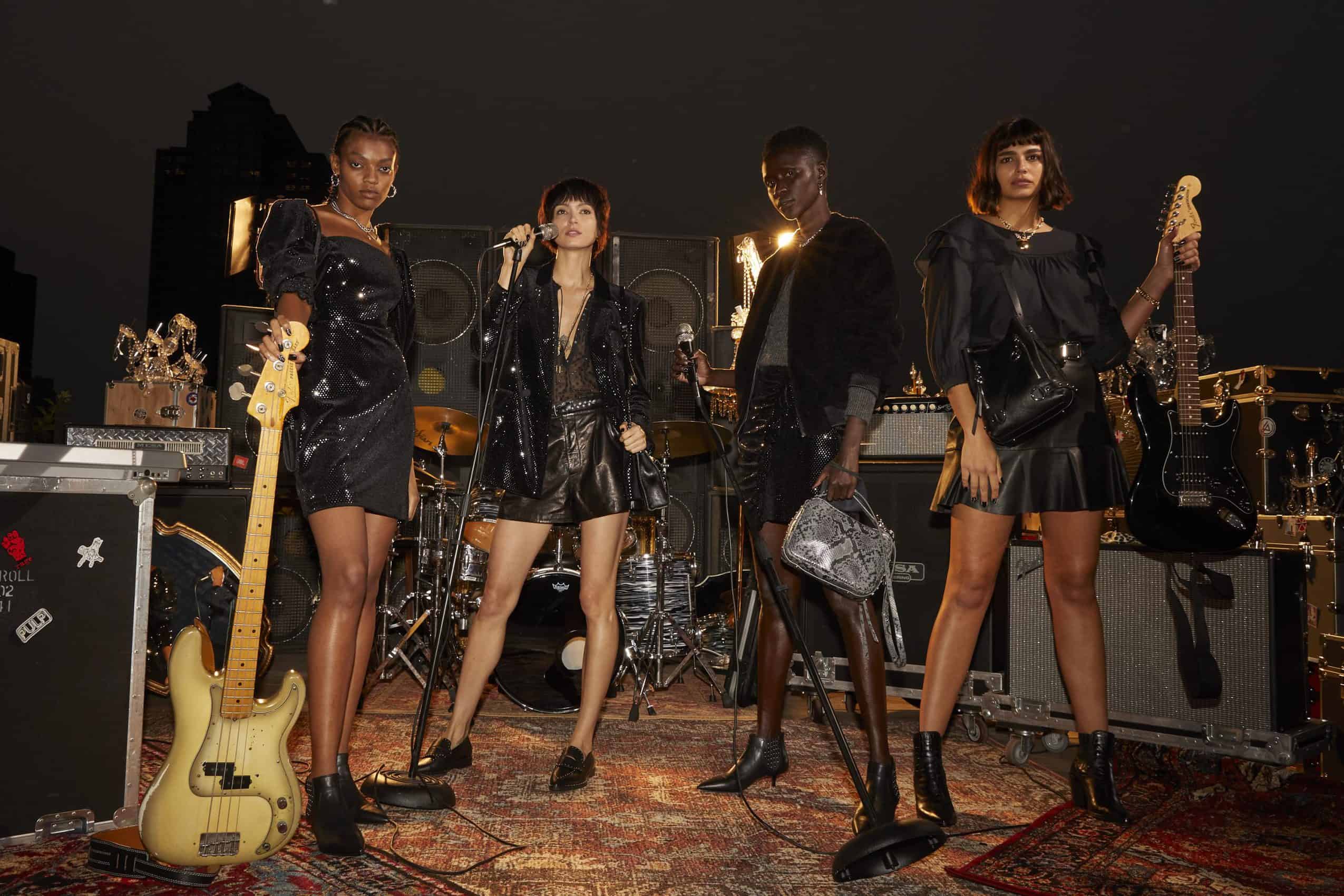 Who were the first influencers that you worked with?
The first one was Fashion Toast founder Rumi Neely. We also worked with Margaret Zhang, Leandra Medine of Man Repeller, and Chiara Ferragni. Back then, these people were not given those invitations. People thought we were working with the D-list.

How have you been coping in the past few months?
The first month was the worst as an entrepreneur. Overnight, 70 percent of our business evaporated. We had to do some furloughs and layoffs to people who were like family to me in order to survive. I was pretty down in the dumps. We didn’t know if we could survive this. It took essentially a restructuring of our company. Our team is actually more united and connected now, and we’re culturally better. There’s a lot more care. Phone calls start with “How’s everyone doing today?” We’re actually doing business. The fact that our customer is responding to the content and what we’re standing for as a brand means a lot. I feel, I don’t want to say the word lucky because we’ve worked our asses off, but I feel fortunate that we’re around and alive and we see a path to recovery.

Minkoff showed her collection yesterday at Spring Studios on the roof. 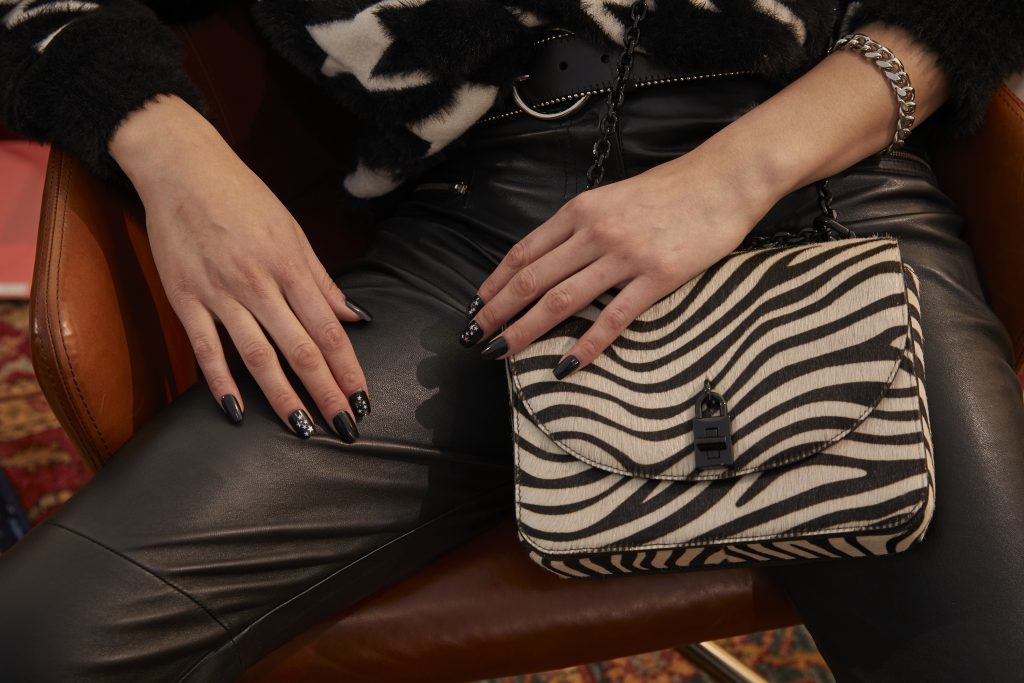 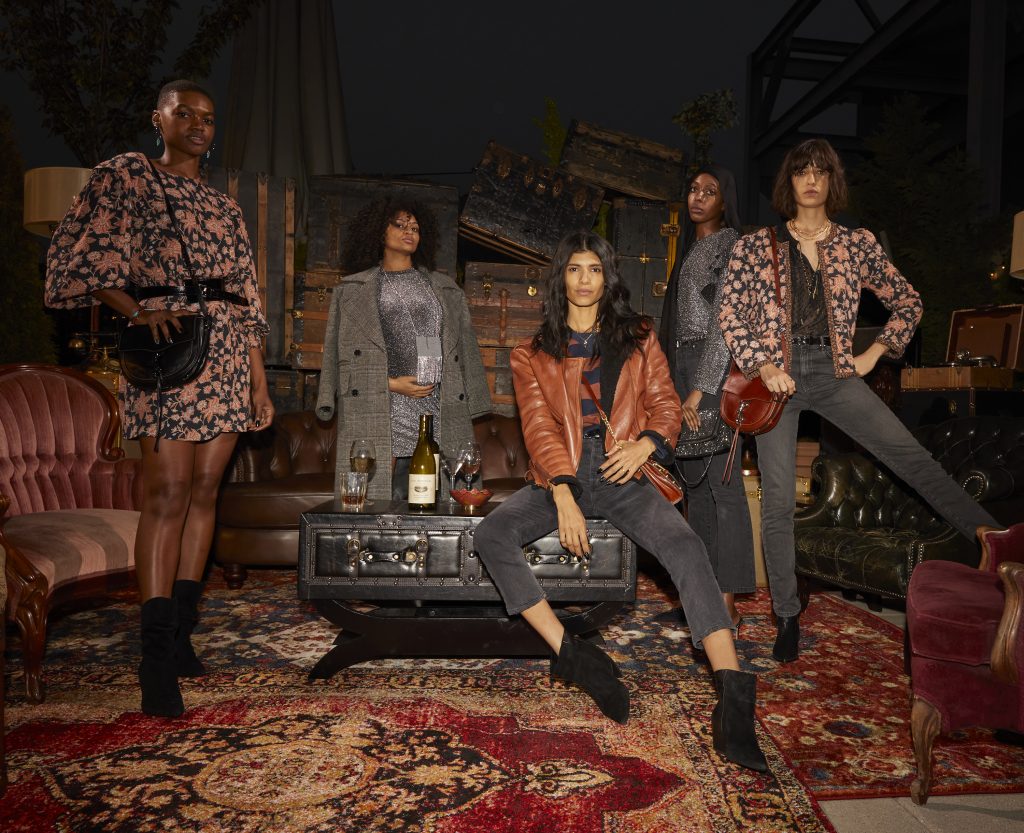 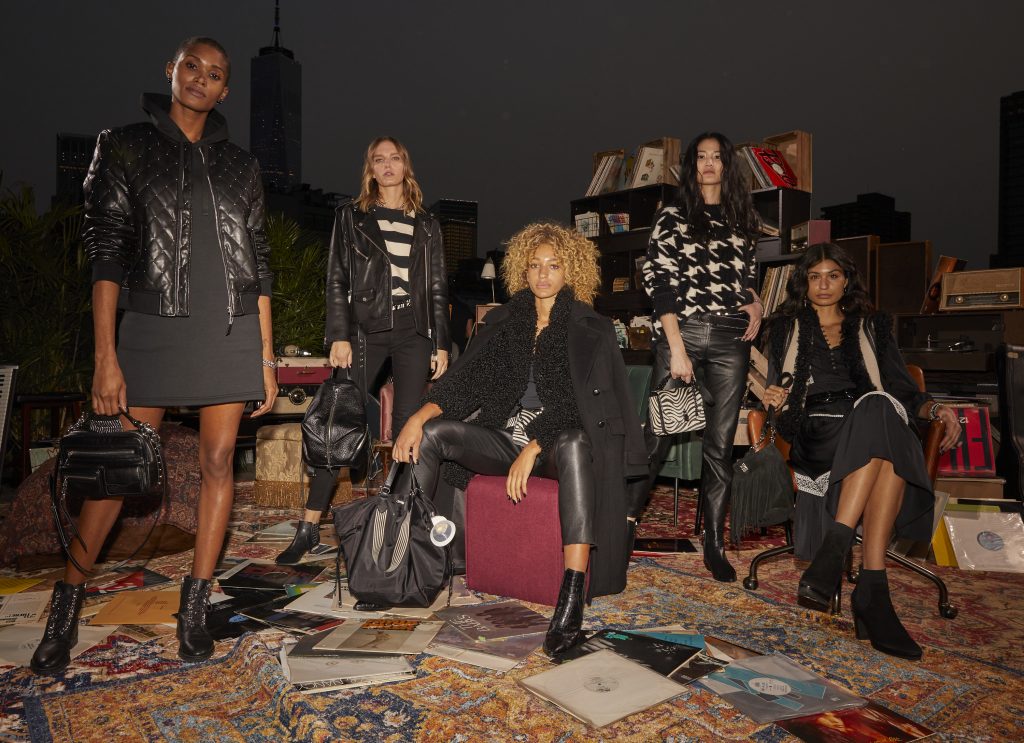 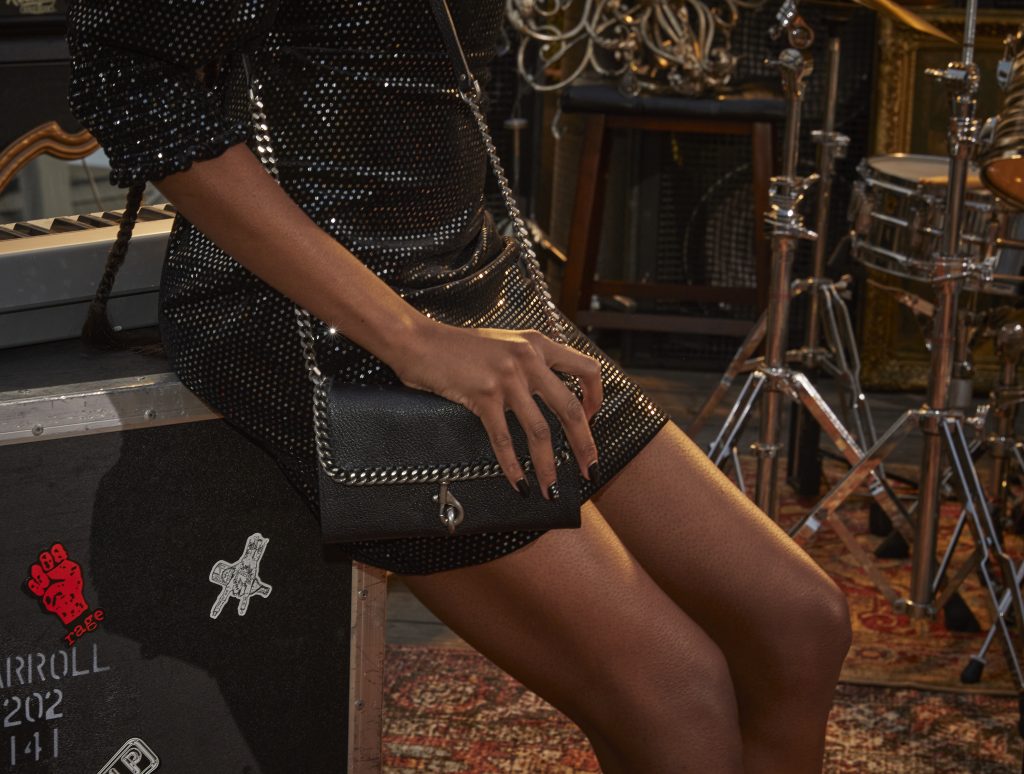 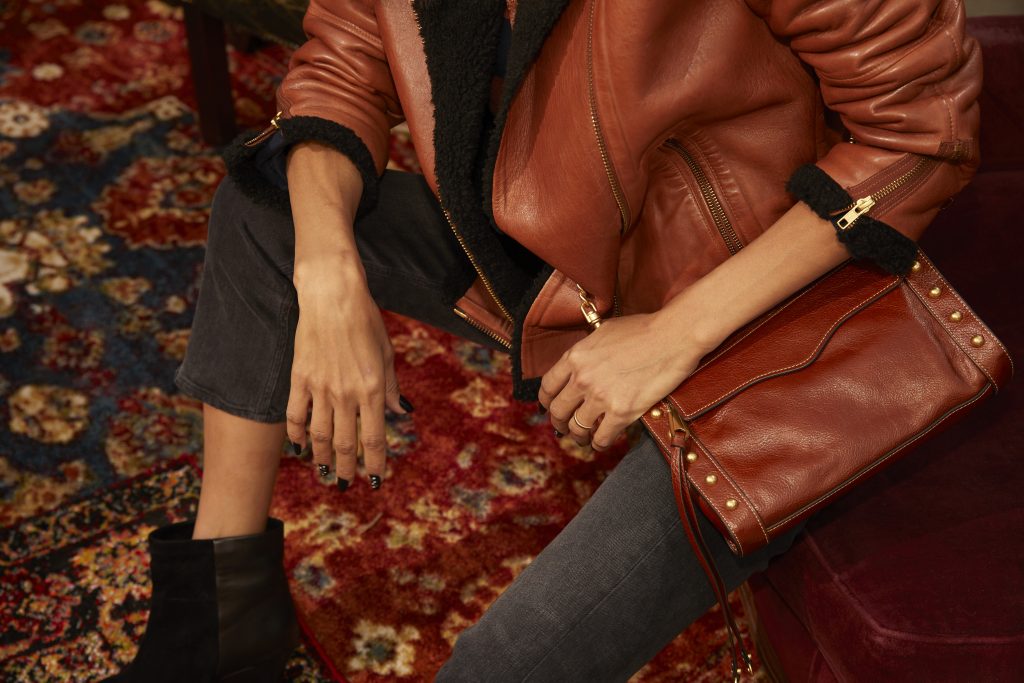 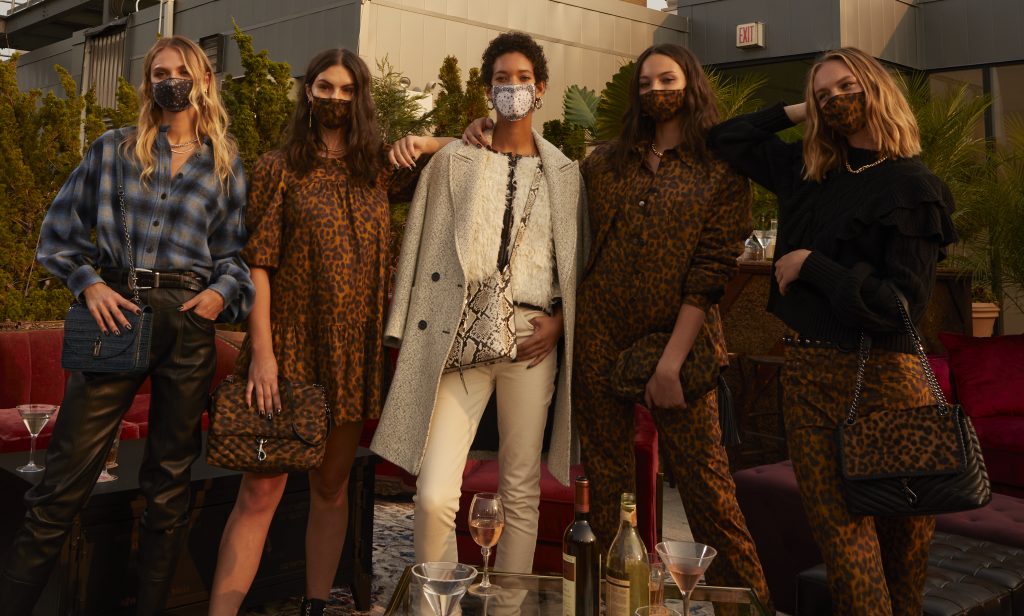 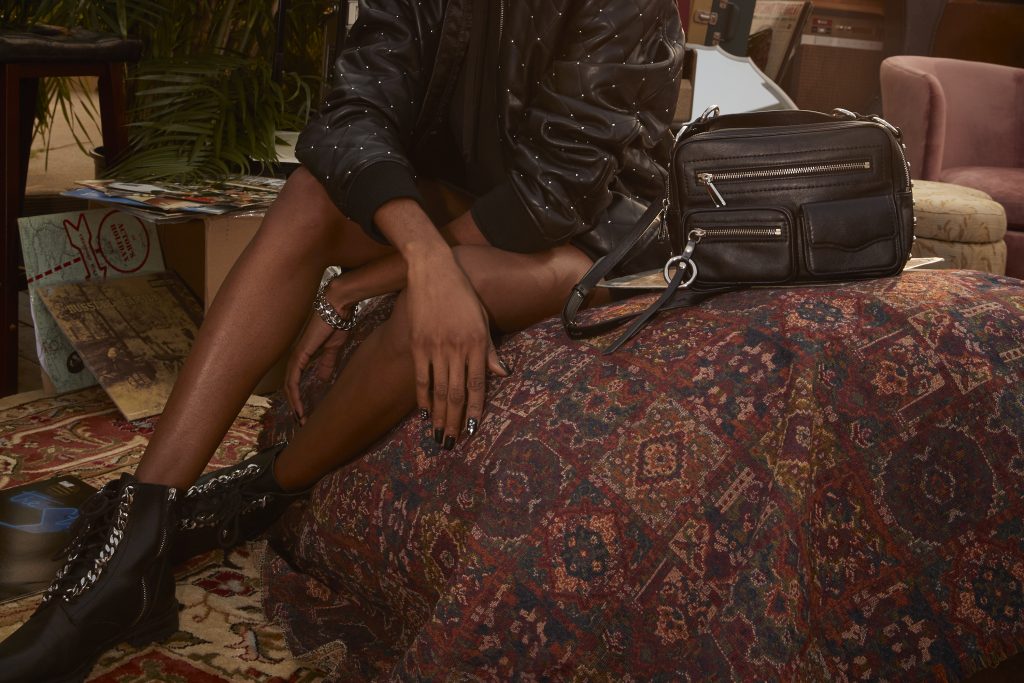 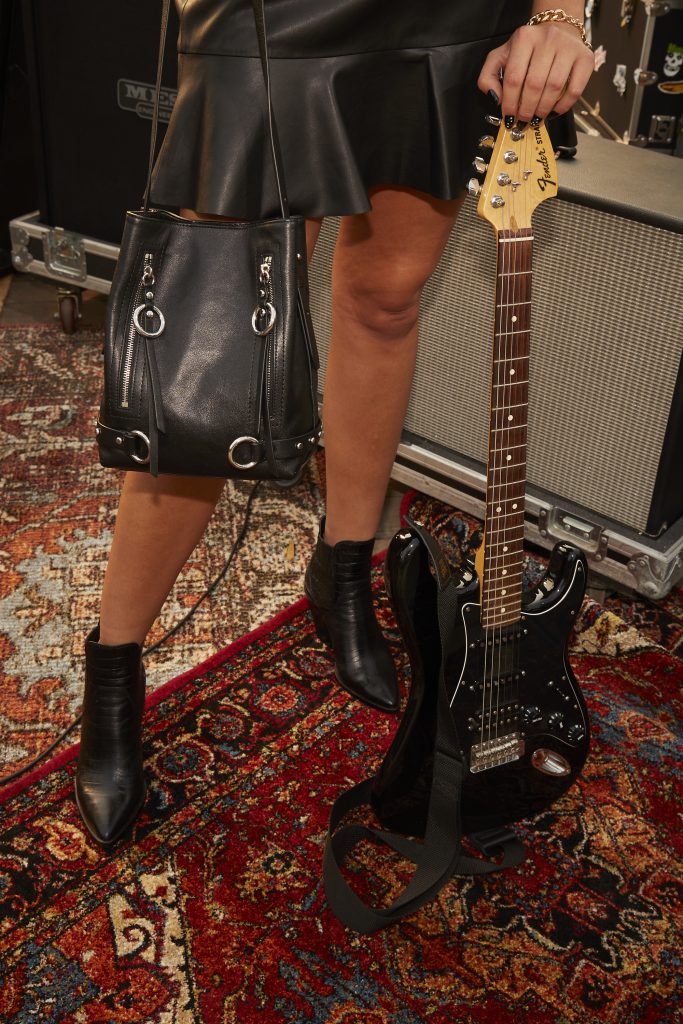 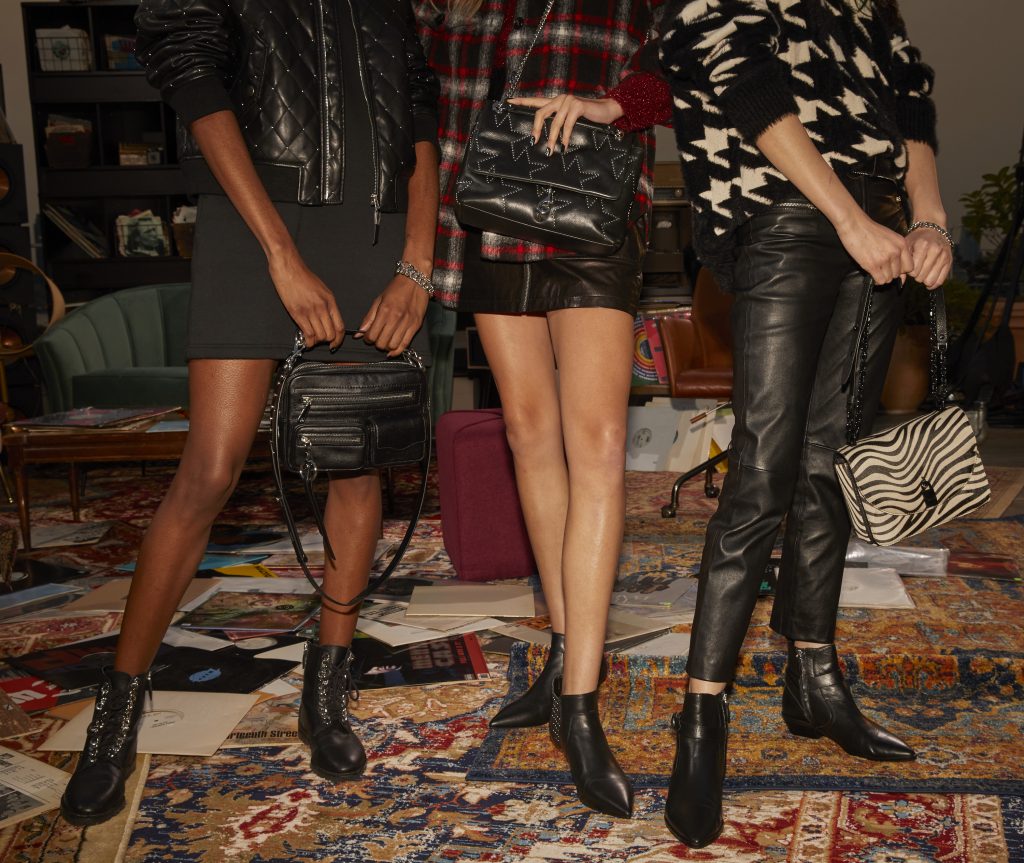