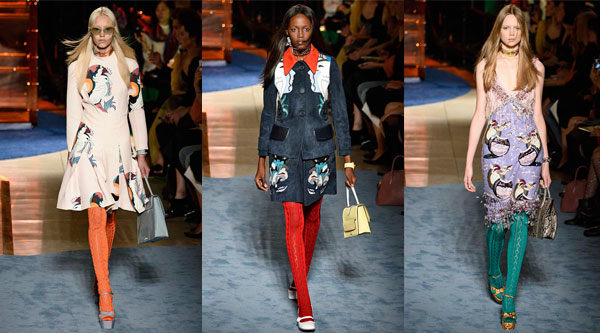 (PARIS) Miu Miu
Miuccia Prada must be predicting cold temperatures for Spring/Summer—her runway was focused mainly on outerwear, and every look was paired with knit tights. The vibe was the swinging Sixties, but leave it to Miuccia to make it look particularly quirky and cool. There were lots of color-blocked skirt suits and coats that opened the show like a soft yellow and blue wool topper worn with a turquoise neoprene mini, a beige top and white knit tights and platform Mary Janes. So often at Miu Miu and Prada it’s the styling that gives you new ideas as much as the clothing. Meanwhile, some of the face prints seen at Prada made it over to Miu Miu. like an art deco visage rendering on a black pleated long-sleeve dress, or details like a cat’s face hiding amongst flowers on a pink coat. It’s these slightly offbeat details that have girls like Lena Dunham perched front row. And then, there were those tall lace up boots that will have everyone lusting. They came in an earthy brown and autumn orange, and looked cool over knee-high stockings. Plus, there were ruched prom dresses and sequined cocktail numbers with tassels. And naturally, fur made an appearance, in lavender, turquoise, and lipstick red coats, all of which got accented with neoprene. We wish we didn’t have to wait till Spring!

Hermes
Welcome to the jungle! We do hope for our next tropical jaunt we will be dressed in Hermès. The backdrop included bamboo shoots and other tropical flora as Out of Africa-esque looks went down the runway. Silhouettes included a high-waisted slim skirt that was unfinished at the waist line and hem, worn with a short-sleeve white wrap top. There were long dresses with tropical florals worn over matching pants, and a particularly chic number which included a pair of peachy leather high-waisted culottes and a white shirt like the aforementioned that had a fantastic cape trench coat thrown over. There were some pieces that felt distinctly Eighties, like a long white dress with a full skirt, finished off with a slouchy boot. But this is Hermès, after all, so the really luxe pieces were done in croc and leather. An emerald green wrapped trench coat and a peacock blue blazer were simple but chic. A croc deep green-knee length skirt? Incredibly decadent!

Vionnet
Minimalists, take note. A crisp collection for Spring came courtesy of Vionnet’s Goga Ashkenazi, involving a metallic sheen and clean, fresh aesthetic. Thin sheets of tulle added an unexpected touch to the mix. To wit: a light blue swash of tulle was wrapped around an angular shirt dress, protruding at the hips at a 90 degree angle, while a navy blazer was given an sheer skirt from a drape of tulle that dripped out of the hem. The white T (always a classic) was paired with evening gowns. Prints weren’t present, with the interest instead derived from Ashkenazi’s play on textures and shapes. A furry T meshed nicely with a summery yellow mini-skirt, drawn wide at the hips, while a sparkly dress V-shaped top attached to a draped jersey skirt would fit in seamlessly at a Hamptons summer soiree. The all-star cast of models (Miranda Kerr, Lily Donaldson, Jamie Bochert, Lindsey Wixon and more) sported nearly-dreadlocked ‘dos, plus a bold stripe of orange, purple or yellow right above the eyelid. Quite the contrast from the simple yet well-delivered assortment of clothes.

Moncler Gamme Rouge
If the Moncler label reminds you of puffy jackets and sitting on a chairlift, it’s time to hit refresh and take a whole different look at the brand. For the final day of PFW, the label’s creative director, Giambattista Valli took a feathered approach to decorative accents, like a zippered dress smothered in in plumes. Were there more animal motifs? But of course! Leopard print pants were paired with a tiger print shirt. Snakeskin caps, put an extra sporty spin on the athletic aesthetic. A few skateboards even made an appearance or two. The bags went the utilitarian route as well; they would be ideal for a glamping trip or a spending a weekend (gently) roughing it outdoors. While parkas were casually tied at the waist, billowing with each strut, they were also perched atop mods’ heads. Shocks of orange and red zipper details added to the collection, where twists of fabric on a jumpsuit or a basic tee emphasized the simpler features of the busy collection.

Riccardo, Carine, Kim & Co. Party It Up In Paree