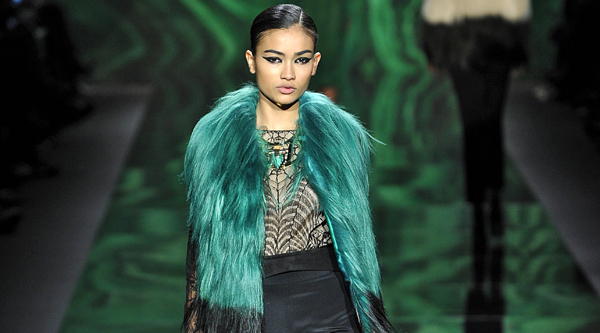 (NEW YORK) Monique Lhuillier
The fairy godmother for the luxe set, Lhuillier specializes in outfitting those frequently on the tapis rouge and gala circuit—and she always delivers. This season, jewel tones and lace festooned the runway. To wit: An emerald green, marble patterned strapless chiffon dress with a sexy high slit (Angelina, are you taking note?). An amaranth faille frock, strapless up top and sporting a draped trumpet gown on the bottom, will be a likely starlet choice if the Golden Globes and SAG awards were any indication of what’s popular. Two looks in particular induced a slight bit of magic in the process: an emerald and black ombre column gown sporting flickering, color-changing effects as it moved, and a black spiderweb-sleeved dress with an illusion neckline that elegantly traced the back’s curvature. Lhuillier’s favorite? “I can’t wait to wear the strapless seamed cocktail dress with the net swing overlay.” Until then, Lhuillier plans to hit the slopes in Aspen for four days of much-deserved vacay. Bon voyage!

Marissa Webb
Marissa Webb’s sophomore collection continued to cement the former J.Crew designer as a solo act with loads of sumptuous separates, towing the line between masculine and feminine. For example, a charming school boy-ish uniform of black culotte shorts and collarless tweed jacket with an untied bow tie hanging loosely over a crisp white button-up, maintaining a grownup, femme appeal in the process.

Chloe Sevigny for Opening Ceremonyâ€¨
Chloe Sevigny and her merry band of pranksters descended upon St. Marks Church on Saturday afternoon for a righteous sixties-esque presentation inspired by the era’s “restlessness of youth and free-thinking”. Inside, straight-faced mods (including Sevigny herself, who joined the cast last minute) lined up in saccharine baby doll frocks, A-line minis, and swing coats with exaggerated collars in era-apropos fabrics including PVC, vinyl, gingham, and corduroy. Meanwhile, a battle of the girl bands ensued with iconic punk rockers lining the perimeter playing one live set after another, from Kim Gordon (formerly of Sonic Youth) to I.U.D.

Louise Goldin
After an impressive return to the Big Apple in September, Louise Goldin looked inside to find inspiration, designing a wardrobe that she would want to wear. Easy enough! This season, the designer honed in on leather-spliced looks, from subtly sci-fi overcoats avec leather shoulders collars to paneled shifts or pleated frocks narrowed at the waist with a touch of cuir. Also a strong contender: the ribbed-knit outerwear.

Moncler Grenoble
Moncler has quickly become famous in New York fashion circles for its dramatic presentations — the Grand Central flash mob! The Central Park rink synchronized ice-skaters! — and this season the august outerwear label did not disappoint. Inside Gotham Hall’s cavernous environs, the label built an enormous black box theater, accessible via tunnel. Within, rows of steeply-banked models decked out in the brand’s jackets, ski pants, sweaters, scarves and hats receded in rows towards the ceiling, giving the viewer an instant sense of vertigo. Kind of like looking up at a mountain to see an army of Moncler-clad skiiers bearing down on you.