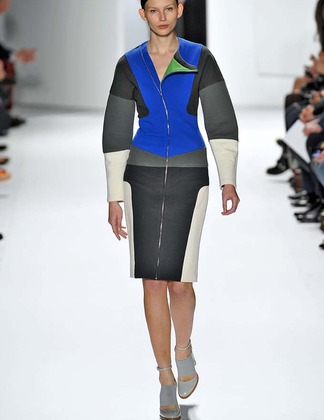 (NEW YORK) Lacoste
Antarctic exploration was the theme of Lacoste’s fall show — which walked on an appropriately snowbound New York day. Jackets and sweaters in cool grays and whites bore prints of ice floes and abstracted rocky landscapes. Designer Felipe Oliveira Baptista played with volume in an appealing, space-age throwback kind of way, translated via coat sleeves and boxy jackets. Mid-century touches also included pops of orange and royal blue in the inset-V of a crewneck collar. All in all, it was a fine, sporting collection—and a few show guests looked like they wanted to borrow a piece or two before heading back out into the elements.

VPL
Colorful shift dresses and slouchy pants with a black, white, and red modernist pattern that looked like it might’ve taken cues from a canvas or two, were standout pieces at Victoria Bartlett‘s VPL show this season. More specifically, a grey shift dress with carefully placed geometric angles of purple and lines of red was influenced by artist Wade Guyton‘s abstract paintings. Other themes at play: boxy coats, oversize knitwear and hints of menswear in tones of grey, khaki and purple. The lingerie was mostly flesh colored in that Vanessa Beecroft-y way. Some pieces were accented with halved, hairy knitted and crocheted sweaters and capes, fit to one side of the body, sometimes secured by elastic. The result? An artful agenda, pushed further and further.

The Punk music scene of the seventies and eighties inspired Rebecca Taylor’s Fall collection, the designer said before her show. Taylor painted a picture of the woman who’s been on her mind: “She’s out at CBGB’s seeing a Blondie show, and she’s got her boyfriend’s huge biker jacket on top of her little dress,” Taylor told The Daily. “Her hose have got a little bit laddered.” And so there was leather! And lots of it—leather pants, leather skirts, leather panels on dresses, and (of course) leather jackets. Among the tough-looking layers and the pants dripping with zippers were some very sweet dresses and peplum tops.

Jen Kao
Eighties activewear seemed to be on Jen Kao’s mind when she worked on her beautiful Fall collection. Worked from fabrics as diverse as leather, neoprene, jacquard, and washed jersey, Kao also incorporated shearling accents, plus a black-and-white spotted mink that Dr. Seuss would’ve approved of. There were oversized dresses with pattern pieces that fit together like an Op Art jigsaw puzzle. And a silver leather outfit that looked intentionally like a boiler suit. The sportier elements, like the long-sleeved T-shirt in that same silver leather, gave the collection edge, while slinky satin evening looks lent some sex appeal.

Imitation
Tara Subkoff showed off-schedule and off-site—indie!—in the Thompson LES’s glassed-in skybar. Opera singers from the Metropolitan Opera, New York City Opera, Gotham Chamber Opera, and the Seattle Opera dotted the premises of the room. These women wore Subkoff’s collection of reworked vintage pieces adorned with large, custom origami works by artist Sok Song. One dress was entirely made of paper. Then the lights went down, the music went off, and a spot-lit performer began singing and acting out a story that centered around a phone. (Some of the paper was sourced from phone books and phone bills, as well as maps, explained Song.) In little vignettes, between which the lights went down and the DJ resumed spinning Kate Bush, the drama unfolded. Subkoff says her work is often “misunderstood” as fashion when it’s really “more about performance, and about collage.” In the bricolage of old and new, paper and fabric, music and movement, an exclusive bar and an avant-garde performance, it felt like there was nowhere more exciting to be on a snowy LES Friday night.