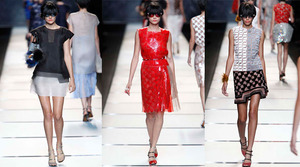 (MILAN) Fendi
While Karl Lagerfeld’s personal dress and outrageous quips have launched his full fledged fame status (read: he’s a legend), Lagerfeld is first and foremost a brilliant designer. He is also not one to look to the past, as he constantly reminds the press. So it makes perfect sense that for Fendi’s Spring 2014 collection, he was thinking of all things tech and digital. “I love to use in a funny way words from the visual web communication world. Very 21st century…” read his show notes. He was thinking of “monochrome color blocks (not blogs…) and an overflow of transferring lines (not files…)”. Well, maybe not files so much as the actual crisscrossing lines of a raw computer chip or hard drive. The variations in color on the show invitation displayed edgy layers of varying tones of degrading red from cherry to coral to salmon to pink, which the show’s first look mimicked the edges and tiered layers of a very light, fluid organza shift dress. The techy inspiration, however, became more overt in the cutout lines of a light multi-colored ankle-length fur coat, a B&W leather must-have skirt, and a midnight blue matching skirt and top with zigzagging black lines that formed a computer chip pattern. A standout: the blush organza below-the-knee jacket with a white geometric design. And the accessories? Knuckle cuff rings and earrings with big colorful puffs of fur. Fun and downright creative. It’s exceedingly clear that this collection’s inspiration truly came before the collection was designed rather than something dreamed up last minute to give the press something to write about. But then, Karl doesn’t have to struggle to give us something to write about; that’s why he’s the Kaiser.

Just Cavalli
Welcome to outer space, where anything goes! A giant screen of spinning meteoroids and galaxies spun on a big screen as the lights went down to signal the start of the Just Cavalli show. To follow? A wild mashup of that requisite Cavalli leopard print, mixed with tropical floral patterns, and some punked out plaid and zippered leather. The latter came in the form of sexy cigarette pants in white and black leather, with waistbands folded over to reveal a tropical floral pattern. There were also plaid cut-out T dresses worn over tropical bra tops or the brand’s classic kerchief dresses done in plaid, check, and lace with some dangerously high slits. A cut-out reflective silver leather coat trimmed in white is likely to be spotted on street style photog bait ASAP. But then again, these were all statement pieces for the sexy young things that can squeeze into microscopic frocks and hit the party circuit. It was classic Cavalli and this line’s youthful clientele will have plenty to show off with this collection.

Ports 1961
Ever the treat, Fiona Cibani invited guests to sip champagne and cocktails in a stark white cobblestone courtyard prior to her most recent minimalist collection for Ports 1961. Following this tres stylish happy hour, guests took their seats on two long rows of bench seating, allowing each attendee to have an unobstructed view of the wares to come. The collection contained the clean aesthetic we’ve come to expect from the label. Always a perfectionist, Cibani was apparently making changes to the clothes up to the minutes before the first mod hit the runway. But with monochrome looks in baby blue and white, with a few punches of black and white snakeskin and a romantic sunset scene, her attention to detail played out well in the end. Fabrics promoted a layering action at the waistline, providing a textured detail to stark white looks. The hair was a new take on the “wet” look with just one glossy face-framing streak,  neatly pulled back into a bun. Ending the show on a dramatic note, Joan Smalls presented the final look, a heavy black silk top paired with an eye catching A-line skirt that hit just below the knee.