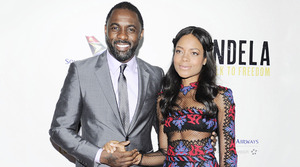 (NEW YORK) Lincoln Center was abuzz last night, as The Weinstein Company with Mercedes-Benz, South African Airways, and DeLéon Tequila hosted the premiere of Mandela: Long Walk to Freedom. The screening of the film, which was based on Nelson Mandela’s autobiography, drew a hefty crowd of viewers. The film’s stars, Idris Elba and Naomie Harris, were the center of attention on the red carpet, decked out in seasonal black tie garb. Who else took a stroll down the carpet? Pat Cleveland, who arrived on the arm of Zac Posen, Harvey Weinstein, Ashanti (who looked very sleek in a leather All Saints dress), Fern Mallis, Anja Rubik, Hanneli Mustaparta, Ronnie Wood and June Ambrose. Mandela’s daughter, Zindzi Mandela, was also on hand to see the flick, which she had seen a number of times already. The film, which was produced by Anant Singh, was created with approval and cooperation from the Mandela family.

Held in Alice Tully Hall, the graphic and moving film hit on nearly every facet of Mandela’s life, starting from his childhood in South Africa, the tumultuous setting in which he came of age, and where he eventually became president. Both Idris and Harris had to perfect their South African accents to play the parts of the former president and his ex-wife, respectively. Director Justin Chadwick explained that even the filming process was emotional: “I used to drive everyone crazy, because I would say that every scene was the most important one. It was all real scenes, created from stories I had heard from people that lived through the struggle.” A few people who had been there on the day Mandela was released from prison were even included in the re-creation of that scene. “South Africa has this energy,” Chadwick explained about shooting on location. “It’s a bit like being in New York; it was very exhilarating!”

After the movie wrapped, the after party began at Stone Rose Lounge. Nestled on the fourth floor of the Time Warner Center, the likes of Lorraine Schwartz, America Olivo, and Gayle King toasted to the film’s success.
DENA SILVER

IMG Set To Acquire MADE And Bid...