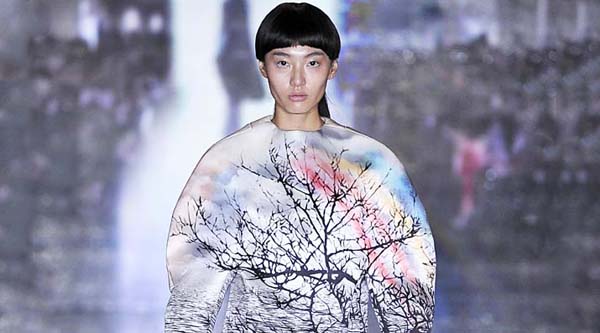 (LONDON) Mary Katrantzou
Form was the focus of Katrantzou’s Fall lineup. While many of the Fall runways have focused on exaggerated proportions, Katrantzou took it a step further with enormous winged sleeves, voluminous tulip skirts, and severely cut triangular bodices on dresses. Also, in focus? Famed photographers Alfred Stieglitz’s and Edward Steichen’s shadowy prints of turn-of-the-century street scenes, like a solitary man walking down a cobblestone street toward a lamppost which was imposed on an off-the-shoulder sheath. Likewise, a man walking riverside beneath a cherry blossom tree during twilight was printed on a black and white silk bell sleeve dress. In sum, this was one dark offering that lit up the runway with romantic reverie.

Vivienne Westwood Red Label
As punk’s preeminent princess, it’s only natural that Dame Vivienne Westwood‘s collection would (and typically does) come with a bite. From a teal and burgundy striped overcoat paired with blue and red striped over-the-knee stockings and a yellow plaid miniskirt to an ’80s-style metallic ombre jacket paired with sequined harem pants, all the key elements were there. (Not to mention those bold, painted visages!) But there was a subdued current threaded through the collection that alluded to a “been there, done that” ‘tude with ladylike overcoats and pencil dresses twinned with cardigans and nipped waist pant suits, one of which came complete with a clipboard suggesting her gal’s all grown up.

Mulberry
Alexa Chung, Lana Del Rey, and a gaggle of Mulberry mavens gathered for an intimate affair at Claridge’s on Sunday morning, noshing on spinach and mushroom or bramble berry muffins, washed down with—what else—woodland-inspired juices. That was just a teaser for what Emma Hill had in store for her favorite front row devotees post-brunch. This season, the designer looked to the British children’s fable The Wind in the Willows, based on the adventures of four well-dressed and cultured animal friends, for inspiration. Blown-out checks in navy, emerald, and burgundy were found on oversized coats, jackets, cashmere sweaters, knits and sequined shift dresses, which seemingly took cues from some of the three-piece check suits worn by Toad in illustrations of the children’s tale. Most of the references, however, weren’t quite so literal. To wit: budding bell-sleeved coat dresses paired with floral-patterned crop pants or an emerald tweed jacket worn over a Peter Pan collared sweater evoked the spirit of the British countryside. On the other hand, wide pleated leather skirts paired with pullover leather tops or leather caplets in the same moody color palette gave off an edgier, urban vibe. The result? A cohesively sophisticated collection that was anything but childlike. Looks like the winds of Fall are blowing Hill’s way.