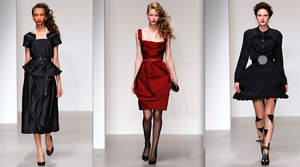 (NEW YORK) Vivienne Westwood Red Label
Oversized lapels, shoulder pads, geometric motifs, and heart accents. We’re not talking about the ’80s; we’re thinking Vivienne Westwood and her most recent collection for her Red Label. But that wasn’t the only era visited; a nod to ancient Greece came in the form of a rouge sash and a Grecian column applique. The ’50s were referenced in a black gown with a round peplum and a crinoline skirt. The references were familiar, sure, but they often felt revamped and modern. A plaid suit, for example, sported a print that gave the illusion of a slimmer silhouette, especially when topped with a comical chapeau and semi-circular lapels. Perhaps to underscore the sartorial melding of past and present, Westwood’s granddaughter took a spin on the runway. Keeping it all in the family!

Jonathan Saunders
It was a mish mash of patterns, proportions, and textures chez Saunders this season. There were plenty of the oversized, round-shouldered coats that have been so pervasive on the runways. But Saunders did his with extra large sleeves and patterns made up of a mix of patchy fabrics. A red slinky slip dress with a teal and black striped coat thrown over looked as if it’d been reworked from a menswear pinstriped suit, paired with brown tights and nude heels. An ’80s-esque knit striped sweater was worn over a mismatched ’70s style asymmetrical striped below-the-knee skirt and harlequin print cream shift was worn under a fluffy white coat hair vest and paired with bright yellow and black chelsea boots. It looked like Saunders’ girl had beelined it to the nearest vintage and secondhand shops, reworked a few pieces, and thrown it all haphazardly together. Trend setting? We’re not sure. Stirring the pot? Absolutely.

Paul Smith
The print-crazed Paul Smith put his own spin on pajama dressing by starting his collection off with PJ pants, luxurious robes, and button-down tops covered in swirls of paisley and electric-hued stripes. The rest of the collection was equally rather cozy; think relaxed trousers with wide cuffs, big furs in bright hues, and slouchy knit sweaters. Things got a bit dressy when blazers were factored into the collection, but they were brought right back down to casual with a simple knit cashmere and a tousled ‘do. Throughout the collection, shades of yellow and grey held court, scarves were haphazardly tied around necks, draped across shoulders, and even fashion as ascots. We’re totally vibing with Smith’s cool girl this season, especially when that suede cross-body satchel is thrown into the equation.