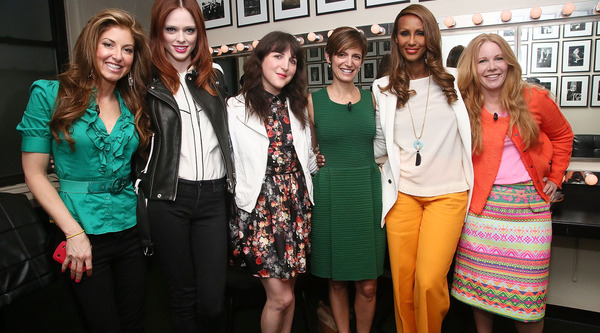 (NEW YORK) The tricks to becoming a stellar businesswoman, specifically in a start-up-centric cultural moment? Cue Wednesday’s panel discussion hosted by Glamour at the 92Y, “Secrets of Start-Up Queens: How to Launch a Successful Business in Today’s Entrepreneurial Economy.” The glossy’s EIC, Cindi Leive, moderated the discourse between a quartet of mavens: Iman, Dylan Lauren, Coco Rocha, Refinery29’s Piera Gelardi, and SoulCycle’s Elizabeth Cutler. The bright and driven set of women revealed the process of creating such successful businesses, and their best advice for women gunning to do the same.

Firstly, the sweet stuff: Lauren’s idea for Dylan’s Candy Bar was inspired by candy from around the world.  She explained, “I started filling suitcases with gorgeous sculptures from Italy and packages from China. Then I started doing collages and mosaics with candy, and the idea evolved to actually selling this candy.” Entrepreneurialism runs in Lauren’s family. Her father is, of course, none other than Ralph Lauren (perhaps you’ve heard of him?) His creativity and professional success made it easy for Lauren to turn to him for advice. “My dad, being such a visionary, really was one of the only people who understood that it wasn’t just a candy store selling candy. We were selling a lifestyle. Dylan’s Candy Bar is about merging fashion, art and pop culture with candy, so other people outside of my family who were less understanding of those things didn’t understand the big picture.”

Thinking about the big picture was key to Cutler’s conceiving of SoulCycle as well. Fun fact for you cycle-crazed types: Her first location for the gym was actually found on Craigslist! “When we opened that first location on 72nd Street, we didn’t have a sign. So because there was no way for people to find us, we were so grateful to see every single person who walked in the front door that we wanted to make sure they were happy and wanted to come back.” One of Cutler’s methods of ensuring customers returned (and, soon enough, got addicted) was through design. Also interesting: In terms of financial matters, Cutler admits that a lot of their early funding for SoulCycle came from credit cards. “We would not be in business today if it weren’t for American Express,” Cutler said. The strategy must have paid off (no pun intended); today, SoulCycle’s counts 600 employees in its wildly popular, ever-expanding business.

Wonder what Rocha and Refinery29’s Gelardi share? They’re both married to their business partners. “The fact that we work together means that we have a shared passion and it’s something that is really fun for us to collaborate on,” Gelardi explained. “I always joke and say that we only fight about work, which is actually pretty true.” But Gelardi admits that most of the time it’s an agreeable partnership: “We commiserate over the things that are tough and triumph over the things that are good.” Besides an awesome partner in work and play, building a great office vibe has been important to Gelardi. “Working with my team, we’re creating this culture where it’s a really fun place to work and where I feel compelled to inspire the people around me but also feel inspired by the people who are with me everyday.”

Rocha turned herself into a brand by developing a major social media following, and wanting a place to speak frankly. “I have a voice that I can use for myself and for my industry and my peers. I speak on behalf of a lot of models today…and think it’s important for them to have voices. That’s the direction I decided to brand myself,” Rocha said. Recently named contributing editor at PC Magazine, Rocha also believes strongly in the importance of trailblazing. “When I started a Twitter account, no one was on it but I decided to play around with this new thing…I did the same thing with Instagram.” Pays off to be first, non?

Fellow mod Iman shared some strong opinions on business success, culled from her experience as CEO of Iman Cosmetics. Advice to memorize? “You have to believe in yourself because they smell it on you if you don’t.” Iman also explained that it’s important to know your business inside and out and know what you’re selling. Also: asking for help is perfectly OK! “When you reach out and ask to be mentored by another female executive, you would not believe how you will be uplifted,” said Iman. Mentoring aside, you better have something great to sell. “At the end of the day, it’s the product, stupid. A woman might buy it and say, oh Iman created it, but if she takes it home and puts it on and it doesn’t work, you’ve lost her.”

Shot Of The Daily: Bette Midler and Michael Kors Get Green

Mary Murcko Named Publisher At Self