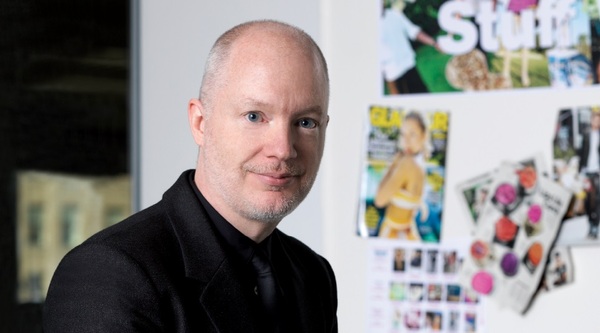 (NEW YORK) When Glamour sought out a new design guru to spruce up its look in October, just a year and a half after a full-on revamp, Cindi (and Anna) poached ELLE’s longtime design director, Paul Ritter, for the gig. Just don’t call it a redesign. It’s simply Glamour writ large, thanks to Ritter.
BY ALEXANDRA ILYASHOV

Why did you bid adieu to ELLE after half a dozen years?
I had been at ELLE for a while. I didn’t think I’d do another magazine after that. I’d been talking to a bunch of brands; I was looking for something big. This opportunity came along, and it was so massive. It’s such a huge brand, I just couldn’t say no. It was one of those offers you can’t refuse. Those are few and far between. I just had to do it.

Why was the bigness so appealing?
I’m not looking to do some little indie project—it’s fun, but I’ve done the projects [you produce for] 1,500 of your closest friends, and that’s it. This is smooth sailing; a super successful brand. This is not a problem child. This is not, ‘Oh my God, what do we do to fix this?’

Did you get a call from Cindi [Leive]?
I got a call from Cindi [Leive] and Anna [Wintour]. It happened really quickly. I met with them on a Friday and was in the next Friday, basically. It was very, very fast. At my first meeting with Cindi, she told me about the reach of Glamour—12 million readers, 7.5 million online. One in 10 women in America read Glamour. Those kinds of numbers are mind blowing to me. It’s so much bigger than ELLE, both as a magazine and as a brand.

What’s it like working with Anna?
She’s an incredible asset. I find her to actually be charming, funny, and incredibly smart. She’s a great sounding board, and she’s been super enthusiastic about how things look so far. It’s a lot less drama. It’s businesslike in the best sense.

Could you have spent a few more years at ELLE?
Totally. I talked to people [about new jobs] and I kept saying no. This was the first one I thought I could sink my teeth into, get my head around, and go with. I think the last time I was this excited about a project was ELLE.

What’s your vision for Glamour?
We’ve really been honing it as we go along. It’s a tweak; it’s not a full redesign. I’m keeping the core DNA, energizing, and focusing everything.

Sounds pretty subtle.
You’re not going to see crazy font changes or any of that stuff. The bones were really good. When you have something this successful, you don’t want to scare everybody away.

How would you describe “the Ritter effect?”
My thing is clean. Loud clean, I guess.

Were there untouchable design elements? Anything sacred?
No. Honestly, I think if that were the case I wouldn’t be here. There are core franchises I love, like the Do’s & Don’ts, which I’m just amplifying.

How do you aesthetically amplify?
My philosophy is multi-platform—making each platform sing in its own way. There’s cross-pollination and things wink to each other. But print looks like print and digital looks like digital. Don’t try to make a print page look like a website!

How would you sum up the au courant look in mag design?
We’re entering a time that’s a bit more modernist. It’s a cleaner phase, an early ’90s kind of approach to things.

You’ve redesigned plenty throughout your career. Are you a redesign junkie?
It’s not scary. I enjoy the process of launches and redesigns. Creatively, I like putting my stamp on things. It feels like parachuting into the jungle with a knife between my teeth, a thing of duct tape, and WD-40. I just have to make it work. I’m not a design geek. I’m not going to sit here and pontificate about the curve of an “R” for hours. I just can’t. That bores me to tears. I see design as a means to an end.

So what’s your approach, if it’s not obsessing over typography?
I find a project’s energy and hone in on it. One of the first things I do on a project is make key words. As I work, I look up and ask myself if I’m hitting those key points.

How do you jive with Cindi?
She’s awesome; she’s like an Energizer bunny! She’s a real editor’s editor. She dives in and gets macro to micro. To her, anything is worth making better. I like when someone’s really clear to work with. Otherwise it just turns to mush. Also, she has a photographic memory. It’s astounding.

What a match!
It’s very odd, we already have that parallel thought thing going on. She recently emailed me about something that I happened to be looking at. I asked her if she had a Vulcan mind meld with me. We’re both early risers, too. We email about ideas then.

How was working with Robbie [Myers] during your ELLE years?
Robbie is great, too. They’re different people, but they’re both really strong editors and wordsmiths. I’ve worked with a lot people—I’m that old—but they are both where they are for a reason. They are just super impressive women.

Will you stay tight with Robbie and the ELLE crew?
ELLE was like my family for such a long time. Now, with the magic of social media, you follow everybody’s lives. So I see all the fashion girls’ Instagrams. I see all their puppy news. All the important stuff. It’s a little bit weird because we can’t tell each other secrets anymore, but they’re all still friends.

You arrived at Glamour as it was celebrating 75 years. Pressure much?
It was slightly intimidating that my first issue was the 75th anniversary! [Laughs] But I dove right in. I walk down Glamour’s hallways and there’s, like, Grace Kelly and all these incredible women on the old covers. That history’s in the magazine’s pages; my job is to focus in on that.

How do you differentiate Glamour from its competition?
If you want it to look like something else, you’re killing the brand. If you’re not unique in the marketplace, what’s the point? I’m always aware of our core competitive set. But most of my inspiration doesn’t come from other magazines. If someone else is doing it, stay away from it.

What kind of stuff turns you on creatively?
I’m much more interested in European magazines, or Jay Z and Kanye West’s latest album covers. I have three Joy Division album covers on my desk, and they’re my basic core inspiration for everything. If I could, that would be the only thing in my office besides a computer! They’re just pristine and sort of perfect.

You’ve got some music biz experience under your belt.
I used to be creative director at Virgin Records. It was all in Europe so it’s people you’ve never heard of. I do have naked stories of Iggy Pop, but I’m not going into that for The Daily.

Too bad! So, what’s the most brilliant brand around?
It’s got to be Apple. Working in the music industry and then in publishing, Apple’s done this to me twice already: they come along with products that are total game changers and business changers.

You spent time at cult indie title COLORS, right?
I was art director, I was really young, and it was my first real job in New York. I moved here from Paris and freelanced, and someone was kind enough to introduce me to Tibor Kalman, the COLORS editor in chief. I met with them and was hired immediately. It was totally different, genre-defying, and kind of crazy. We had no idea it would be a cult thing. We were just having fun.

What are you loving on the newsstand beyond the fashion glossies?
I’m obsessed with Bon Appetit. I keep emailing Adam [Rapoport] to tell him he’s killing me with his covers. I love cooking.

Publicists Dish About The Rules Of Borrowing