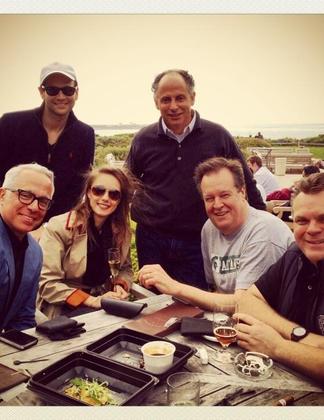 Attention, foodies and the fashionettes who love them (and, more often than not, are them): the culinary cream of the crop hit up gorgeous Pebble Beach over the weekend for Food & Wine‘s big blowout, and our foodie pal, Jaret Keller, was on hand to witness all the delicious action. The resto world savant then debriefed us on all the tastiness…count us in next year, s’il vous plait!

Each year, thousands of fashionable foodies gather for the Pebble Beach Food & Wine Festival, held in one of the most magical locations in the country. The look? Country club chic. For gents: tailored navy blazers with crisp linen shirts and loafers. For ladies: pastel dresses, gold accents, lots of white, and espadrilles. An endless amount of wine was poured, while gourmet dishes were prepared by some of the most talented chefs in the world.

Upon my arrival at The Inn at Spanish Bay on Thursday, I met Geoffrey Zakarian, Francois Payard and friends for cocktails at the outdoor fire pit (aka “the pit”), which became our home base for the next few days. Later on, a small group of us that included Geoffrey, Anne Burrell, Jose Garces, and Jonathan Waxman enjoyed dinner at Sticks. On Friday, Anne hosted an interactive lunch: she cooked the perfect meal alongside her fans. The major event to attend on Friday night was ‘Battle Of The Coasts,’ where chefs from the East Coast (Zakarian, Garces and team) competed against chefs from the West (Tyler Florence and team). Both teams delivered outstanding dinners, but as always East took the cake!

The rest of the weekend included fantastic meals in Monterey with great friends. I’ll certainly miss endless time at the pit, as well as daily performances on the Pacific by the resident bag piper! Until next year…

Dish Alert! Morsels From The Food &...