Barton Perreira Throws A Campaign Bash At The Electric Room 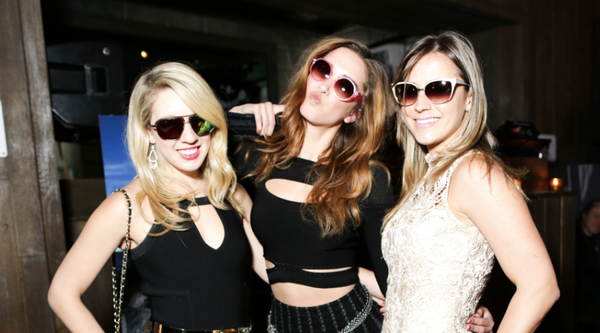 (NEW YORK) Luxury eyewear company Barton Perreira threw a bash to celebrate their new campaign for Spring at the Electric Room beneath the Maritime Hotel in Chelsea last night. Party goers took in scenes from the campaign video, which features two blonde, spectacled beach babes taking in the Pacific Ocean sights with background music from Cari Rae, former lead singer of The Blonds, who also did a private performance for guests. Prior to Rae’s riveting set, Cory Kennedy manned the DJ booth and paled around with Barton Perreira president Tim Cadiente.

Before founding Barton Perriera with Patty Perreira and Bill Barton, Cadiente was doing campaign work for other big name eyewear brands like Oakley, Oliver Peoples, and Mosley Tribes. Cadiente’s portfolio also includes photography of A-list musicians and actors like Jack White, Radiohead, Billy Bob Thornton, Giovanni Ribisi, and the Beastie Boys. Cadiente, who is involved in all the imagery representing the designs of the brand, also shot the campaign. “It’s in the reveal of this video that we get to fantasize about the journey and the sacrifice that this person had to take to reach this spectacular place,” said Cadiente in a statement. Barton Perreira’s luxe frames are handmade in Japan and have developed a cult following. Plus, they’ve graced some of the most famous faces in the world. To wit: David Beckham‘s donned their green tinted sunglasses, Brad Pitt is partial to their aviators, and Ryan Gosling‘s been spotted in their black rimmed glasses. Eye candy much?

Vogue Hops On Board With Shopping App,...

Kate Foley On What She Wore In...