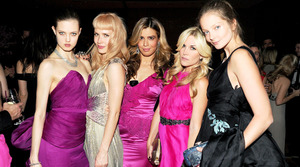 The eve began as guests perused a silent auction, which featured plenty of designer handbags. Or, perhaps, a stay for two in a penthouse suite at the Mondrian’s L.A. outpost? A $1,000 shopping spree chez Ports 1961, anyone? As guests continued to arrive, it was clear that traditional black tie gowns are no longer de rigeuer, as we spotted at least five jumpsuits. The most stellar version: a green lace Valentino number on Nicole Trunfio.

Dinner was served on banquet style tables topped with cherry blossom centerpieces and mirrored plate chargers, which a Valentino employee mentioned were no small feat to acquire. From Burberry to Ferragamo, there was a fashion brigade at every table. The Daily was lucky enough to  dine with Jimmy Choo’s chic crew, which included: supermodel Hilary Rhoda, DJ Chelsea Leyland, jewelry designers Danielle and Jodie Snyder of Dannijo, Olivia Chantecaille, and Olivia Palermo and boyfriend Johannes Huebl.

The latter dutifully informed us that his date, Palermo, was wearing a Katie Ermilio dress. After five and half years of dating, the duo is very in sync, but that didn’t stop Huebl from jokingly telling us, “I’ve been teasing her tonight; I tweeted that I arrived with big bird!” Of course, the petite Palermo looked stunning in the dress…and we’re still having shoe envy over her Jimmy Choo Dream sandals (check them out in our gallery). Rhoda, who palled around with the Burberry-clad Leyland, wore a one-shouldered classic red Valentino dress with gold Jimmy Choo Lance sandals and Candy clutch. The mod’s NYFC chairing role isn’t her first time at the charity’s table, literally and figuratively. “I’ve been involved with New Yorkers For Children for years! It’s a really good cause,” Rhoda explained.

As the night progressed, we caught up with Leyland to see if she would ever consider being a judge on a DJ show like her friend and fellow DJ, Mia Moretti who is currently on VH1’s Master of the Mix. “I was actually asked to. I’ve been asked to do a lot of things like that,” said Leyland. “But my agent and I decided not to go that route for now.” Staving off the cameras: smart move! Holding court at the table was Jimmy Choo’s U.S. president, Brian Henke, who happens to be the spitting image of John Hamm. “I get stopped all the time by people who think I’m him, but I don’t think I look that much like him!” It was the brand’s first time supporting this event, although they get involved with plenty of charities. “We really felt this was a good cause so we are happy to be here,” said Henke.

The night ended with the all the Choo-clad ladies hitting the dance floor. Later on, we spied model Lindsey Wixson, Tinsley Mortimer, and singer Oh Land (Nanna Øland Fabricius) getting down on the dance floor in Gabriela Cadena dresses. Fabricius made the most of her silver pleated gown as she twirled and swung the skirt for a deliciously dramatic effect. Long story short: From the dresses to the heels, there was no shortage of glam at this gala.
PAIGE REDDINGER

Is Miranda Kerr Losing Her Wings?

Siwy Teams Up with Fashion “It” Girls