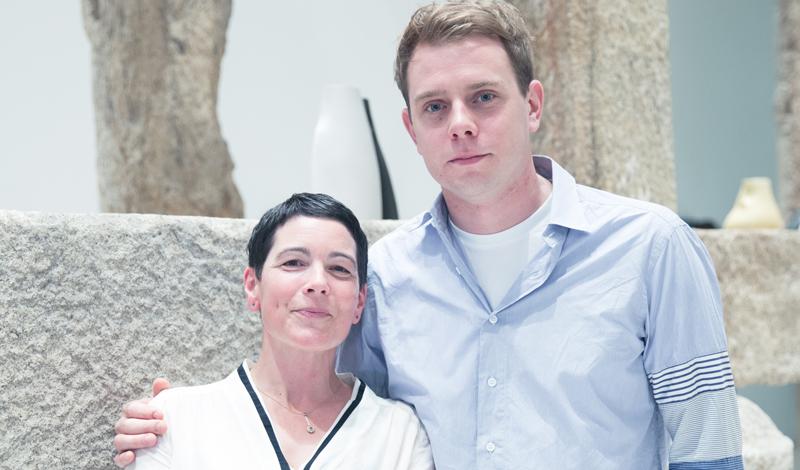 To kick off the festivities at Art Basel Miami Beach, Jonathan Anderson and The Loewe Foundation toasted the third installment of Chance Encounters at their Design District boutique. As the brand’s annual exhibition series, Chance Encounters brings together artists from different disciplines and displays their work in intriguing installations. The 2018 theme focuses on shadows and the interplay of forms as seen in the work of ceramicist Sarah Flynn, photographer Lionel Wendt, and fabric sculptor Richard Smith.

Anderson is a well-known ceramics aficionado, and he chose to present the pieces on an impressive 18th century Portuguese granuary made of stone and wood that serves as the centerpiece of the Loewe store. Flynn didn’t realize Anderson was a collector of her work until a chance encounter at the Hepworth Wakefield Gallery in England for the opening of the Disobedient Bodies exhibition in the spring. “It was really lovely,” said Flynn, greeting guests at the Miami cocktail party. “I could date the works and know which period they were from, but I didn’t realize that they were his. And then I was involved in the Loewe Craft Prize last year, which was a great experience, so we connected again. The commission and the opportunity have been super for me personally, but also they’ve also been wonderful in what they do for the genre of ceramics. It puts it on the map for those who may not have been that interested in the medium before.”

The late Wendt was a Sri Lankan photographer who worked mostly in the ’20s and ’30s, but remained fairly obscure until the late ’90s, when his pieces posthumously entered many major museums collection like the Tate Modern in London and the Rijksmuseum in Amsterdam. A major Wendt exhibition will be on display at Huis Marseille in Amsterdam this year. Smith was a renowned artist in the ’60s and ’70s and was invited to exhibit his work at the XXXV Venice Biennale in 1970. In 1975, he presented his first retrospective at the Tate Gallery.

“I bought a book by Lionel about 10 years ago that I had just found in a little vintage book store and I was like, ‘Whoa, why doesn’t anyone know about this person?'” Anderson told The Daily. “He was doing this kind of work during the same period as Man Ray, but in Sri Lanka, so it’s really amazing. There’s something wonderful in the way in which he deals with scales of prints and plays with the medium of the actual material. There are some here that have never been seen before. I own a few of them. He’s one of my favorite photographers. And then Richard Smith’s piece is something I’ve always loved. It was in a show at the Tate [Museum], and we’ve borrowed it.”

According to Anderson, Chance Encounters provides an opportunity to engage his interests outside of fashion. “It’s a way in which I can articulate something in a different way,” he says. “Brands always talk about themselves, and this is really about building up a cultural language.”

The Zoe Report Gets Hit With Layoffs, Kylie Cosmetics Keeps On Expanding