Gossiping About Germany with Beth Ditto 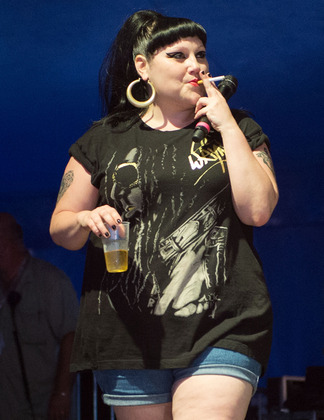 So listen up! The Gossip’s awesome Beth Ditto has become an unexpected superstar in Germany! The Daily Berlin rang the friendly singer in her hometown of Portland, Oregon to discuss her surprising appointment as the next David Hasselhoff...

Why do you think that you’re so beloved in Germany?
I don’t know. Maybe it’s because most of the population can’t understand what I’m saying? I really don’t know. For the most part, I think it’s mostly moms. They like The Gossip. It’s very funny.

We read somewhere you were the new David Hasselhoff…
I feel like it. I’m like, Oh My God, I understand. I don’t meet a lot of A-listers very often, but I got to meet Tom Hanks recently in Germany The only place on the earth that would put me on the same couch as him. He said, “You’re not very big in the US?” and I said, “Not at all,” and he said The Boss (Bruce Springsteen) sells more records here than any where else in the world. I was like, “Thanks, Tom Hanks!” So that was an amazing moment. It just goes to show you that Germans still buy records

How many times have you been to Berlin?
I can’t even remember how many times total, but I’ve been five times just in the past year.

What do you love about it?
A lot of expats live there, which is really cool. I have a lot of really cool creative friends that live there. I think wherever there is cheap rent and gay people you are going to have an amazing music and art scene. When I was there recently I saw an Opera at the Berlin Opera house and it was just crazy. It was nothing like the Berlin I was familiar with. [Doorbell rings in the background.] Hold on just one second. I think that’s the dishwasher guy. I feel like June Cleaver.

What Opera did you see?
The Magical Flute by Mozart. I don’t know anything about classical music or opera.

What do you think of German food?
Oh my god! It’s incredible! They have this curry mustard that’s amazing. Have you had it? You have to have it. I like their food because it is so meat and potatoes. Schnitzel! Come on! Give me a fucking break. I eat a lot of schnitzel when I’m there. I could talk about food all day. But my only complaint is that they don’t have mashed potatoes. There is also this one food where the translation is like mouth garbage and it’s really weird, but it’s delicious.

What do you think of Berlin’s style compared to other cities around the world?
I love how it is very extreme. Either it’s so fucking colorful that it’s crazy or it’s so dark and drab, it’s amazing. It reminds me of what New York was in the seventies. You can really feel things happening there.