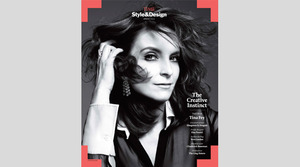 (NEW YORK) It’s back! After relaunching last March, the latest issue of TIME Style & Design has hit The Daily’s desk. Tina Fey gets cover girl honors on the Spring 2013 issue, and while the shot might not be the most glam, the article and spread inside are quite swell. Fey follows in Emily Blunt and Marion Cotillard’s footsteps—the actresses were on TIME Style & Design’s covers for Spring 2012 and Fall 2012, respectively. The issue hits newsstands in N.Y. and L.A., and will be delivered to 500,000 select TIME subscribers. Digitally inclined readers (or TIME-subscribing folks beyond that Style & Design-vetted half a mill) can download or order the issue. What to expect in the third issue since the mag resurfaced, besides a scale-back on fashion coverage? Let us count the ways!
BY ALEXANDRA ILYASHOV

—The actual masthead is comprised of equal parts TIME higher-ups and a separate Style & Design section, with eight full time-ish titles for the Style & Design component, under the helm of guest editor Charla Lawhon. Though you might need a magnifying glass to read it, there’s also a full TIME masthead in miniscule font below.

—TIME managing editor Richard (Rick) Stengel is on Editor’s Letter duty for the mag, musing on creativity, though one would suspect his involvement in the mag’s creation is quite satellite. (“Absurdist chutzpah”? Love that turn of phrase, Rick!)

—Alina Cho interviewed Daily fave Wes Gordon for the issue. Fun fact: TIME and CNN often share content, so it makes sense for Cho to have a tête-a-tête with the ever-charming designer.

—Fashion editor Caroline Grosso’s work on the issue is quite chic—looking forward to more, cheri!

—Belinda Luscombe, an editor-at-large at TIME, wrote the cover story on Fey. But her ties to all matters of the weekly newsmag’s Style & Design offshoot trace back much further: Luscombe actually helmed the first-ever issue of Time Style & Design, pre-Kate Betts!

—Fey was styled by Anya Ziourova, a street style stalwart who works her styling wizardry for Russian editions of glossies like Tatler and Allure.

—Fashion editor Caroline Grosso’s work on the issue is quite chic; looking forward to more, cheri!

Miscellaneously Of Note
…Tales about cocktails? We love a good libation, to be sure, but a page simply on Drinks tastes a bit tired, non?

…That de-emphasis on fashion is definitely evident, with design (think décor, art realm, et al) taking precedence. Shouldn’t be much of a surprise, then, that T and WSJ. are getting the gets on major fashion stories.

…Things we know now, thanks to this issue’s “End Note” page: “sultry” sandalwood is the scent du season, apparently…

Kate Betts On Her New Memoir ‘My...