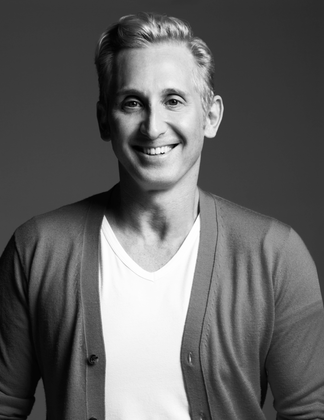 (NEW YORK) David Meister is on speed dial for plenty of stars, including Sharon Stone, Sofia Vergara, and Tina Fey. While his designs might be regulars on the tapis rouge, this L.A.-based designer himself was born to be in the spotlight.
BY JULIE ZIGOS

What was your first gig in the industry?
When I graduated from the University of Cincinnati School of Design, Architecture, and Art, I packed up my bags and moved to New York. My first job was at Danskin, back when Danskin was hot.

What are the perks of being an L.A.-based designer?
Fashion has become so red carpet-oriented; it’s great that I’m here and accessible because certain actresses love it if you can slip over for a last-minute fitting.

And we’ve seen you on TV before, non?
I have a collection for HSN, which is so fun. The first time I was at HSN, I was on air three times in two days. The first airing finished at 1 a.m., but I had to be in a meeting with my producer at 4 a.m., to be back on the air at 6 a.m. It was like being back in college, pulling an all-nighter. Except you’re on TV and you have to be energetic.

You’re also a regular on talk shows?
I’ve been on TV discussing fashion or award shows in general. Other times I’m doing segments that are specific to my collection. But we also dress a lot of the talk show hosts; we work a lot with Lara Spencer, who loves to talk about her David Meister dresses.

Favorite part about being on TV?
On television, there’s no going back and changing or fixing something; I love the immediacy of it.

How do you prep for a show appearance?
I don’t! I just show up, and do it. Everything that happens on TV is spontaneous, which I think keeps it interesting, as does the chemistry of who you’re working with.

In February alone, Mindy Kaling, Katie Couric, and Diane Lane have all been spotted in your dresses. Do you have a penchant for dressing strong women?
I’ve never thought of it, but now that you say it, I think it’s true! Confident and strong women just want to wear things that look great. The sign of a good dress is that you notice how great the woman looks. You don’t notice that she’s wearing a great dress, but that she looks amazing overall.

Who’s driving the L.A. fashion moment?
People used to look at fashion publications for what to wear. Now, people look to celebs in the weeklies because that’s really who they want to look like. Whether it’s hair, makeup, shoes, or gowns, it all starts on the red carpet and L.A. owns that.

Will you always know when a celeb wears one of your gowns?
I always say, you never know if a celeb is going to wear your dress until you see that leg getting out of the limo. Celebrities usually don’t confirm until the day before and sometimes they get out of the car and they’re not wearing your dress.

Any examples?
When we dressed Tina Fey for the Emmys several years ago, she called in one of my gowns. We didn’t hear anything so we figured she wasn’t wearing it. I was at the Emmys that night, and when she came onstage I realized ‘That’s my dress!’

Do you have any fave red carpet looks?
I love the fuchsia dress I did for Felicity Huffman. And I love Sharon Stone, so anything I’ve done for her. No one knows how to work a red carpet like her.

Have you ever been star struck?
Only once, when I met Angelina Jolie. I think I drooled on myself.

And you’ve been doing this whole thing for 15 years!
Here I am, still standing! And 15 years in fashion years is kind of like dog years, my brand is probably like 135 years old!

When’s your busy season?
Every day! In fashion there’s no downtime, but the slowest month is December.

If you ship every month, how many seasons do you offer?
We do Pre-Fall, Fall, Holiday, Resort, Spring, and Summer. There are six seasons, but some seasons have two or three deliveries. It’s a lot!

With all that going on, where can we find you on your day off?
I have the most perfect child in the world, my Havanese! His name is Petey Siegel-Meister. He’s eaten cashmere, and ruined some Gucci and Prada shoes.

He’s got expensive taste!
He never goes for the cheap, but it doesn’t matter. When you’re that cute, you can dine on whatever you want!