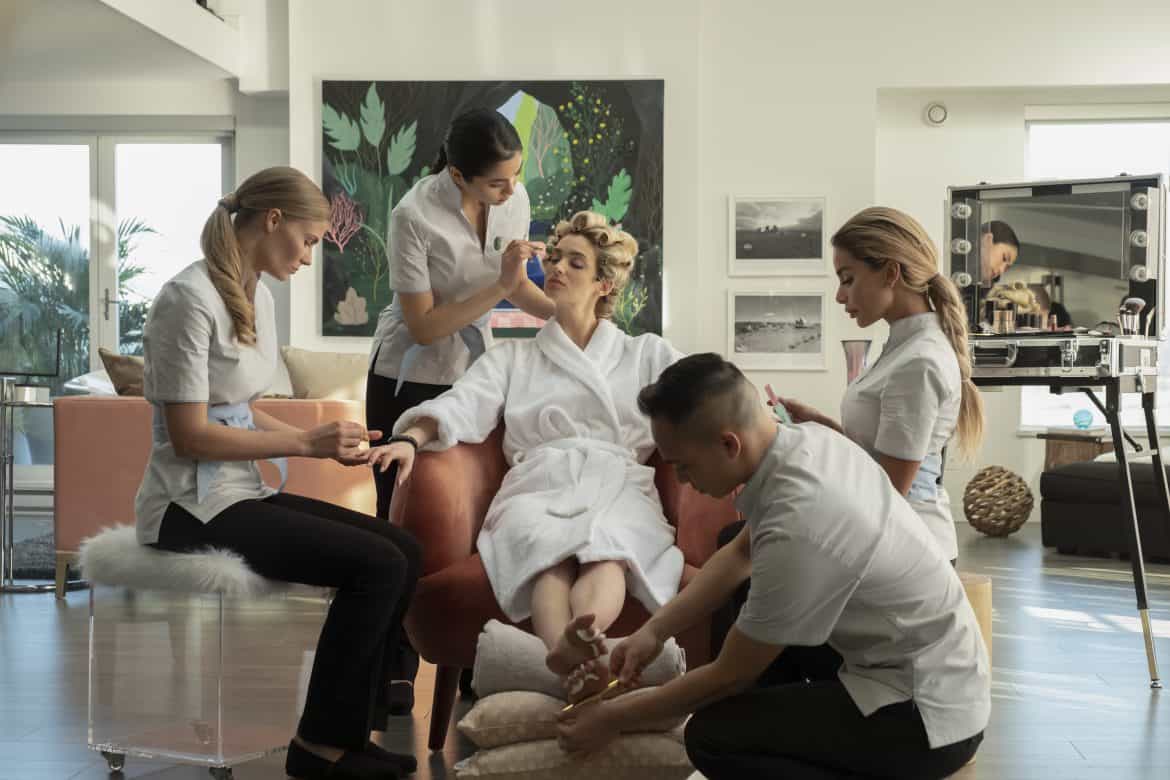 Amazon Prime Video’s new show, Upload, is a dark (but not too dark) new comedy set in a near future where people can cheat death by uploading their consciousness to a virtual world, where it will live for eternity in paradise. Sort of. There are a few catches that make the “reality” of life after upload far from heavenly, especially if you don’t have the real world coin to pay for all the extras that make life so much fun.

Created by Greg Daniels (The Office, Parks and Recreation), the show stars Robbie Amell (The Duff) and Andy Allo (Pitch Perfect 3, Dear White People) and a supporting cast that includes Kevin Bigley, Allegra Edwards, and Zainab Johnson. The Daily caught up with the three co-stars on Zoom last week ahead of the show’s debut on Amazon Prime Video, to find out more about the show, their own relationships with technology, and whether or not they’re ready for fame.

I’m sure you’ve been asked this before, but would you upload if you had the chance?
Allegra Edwards: Yeah, we’ve had that question before, but it’s funny, I’ve been saying that I would opt out, because I think it would get tedious after w while, but maybe I should just be more fun and go for it and like think about what would make it ideal. Living forever, though, it’s like Tuck Everlasting; I don’t think he was very happy.

Kevin Bigley: I’ve been saying I would do it too, but I guess I don’t really know. This quarantine feels like an upload in that we’re isolated. Maybe if you have family and friends, that would be nice but there is still this tedium, like every day is a carbon copy of the last. Like the other day, my wife and I were going to bed and I turned her and I was like, “I can’t believe it’s Wednesday” and she was like, “It’s Thursday. Tomorrow is Friday.” Life without purpose, without an occupation, what does it matter? I’ve been playing a lot of guitar lately, but I’m not a musician, so it’s like what am I really going to do with this? 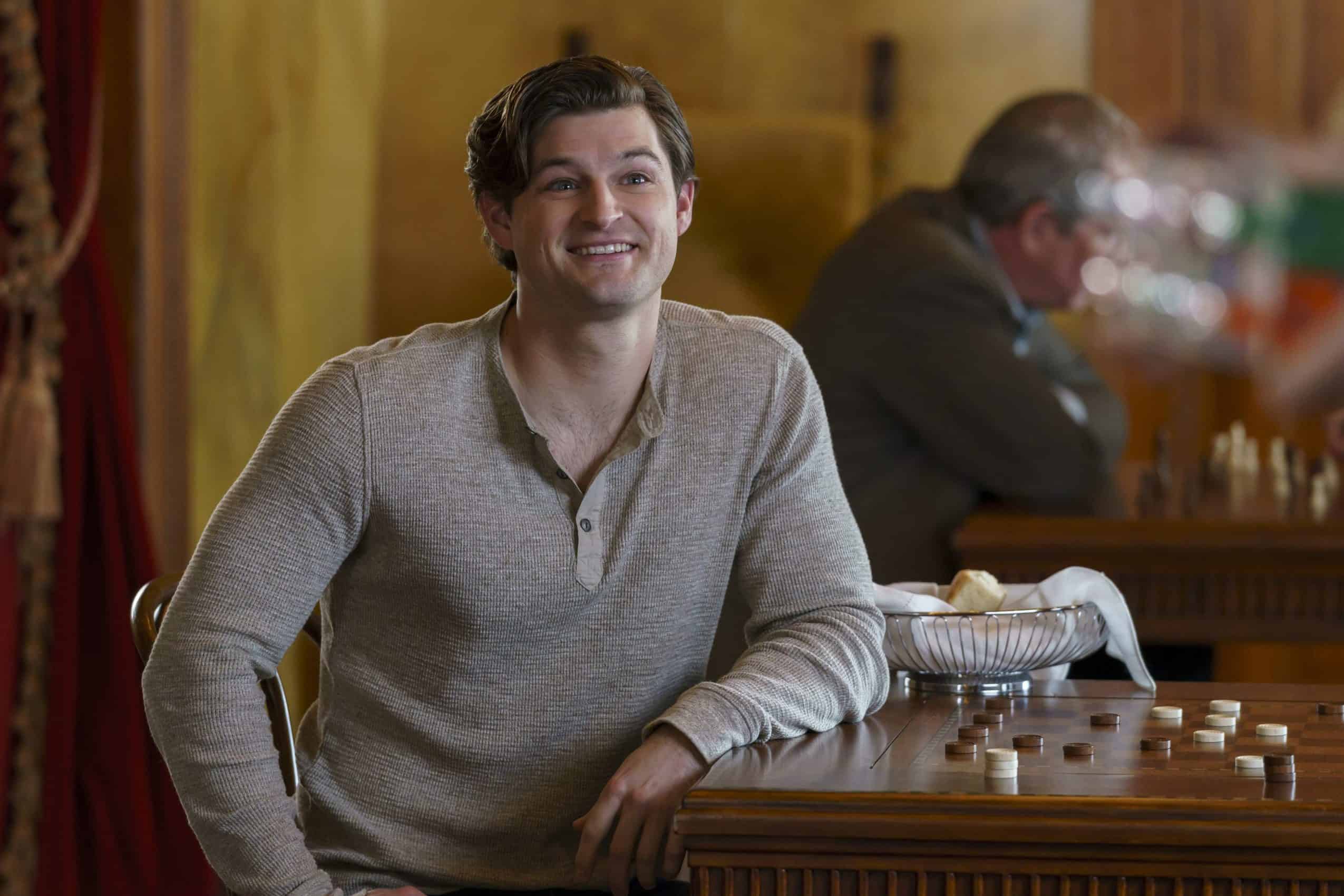 What about you, Zainab? Would you upload?
Zainab Johnson: I’m not indecisive, normally, but I’m really on the fence about this. When you upload, someone else has control over you, and I don’t like that, but I don’t know if that is better or worse than my existence just coming to an end.

So what do you think happens after you die?
Kevin Bigley: I think it’s like a rustic cabin in Vermont with endless breakfast.

Zainab Johnson: Growing up, my parents instilled religion and faith in me, so it was just like, “Oh, if you do good, you go to heaven,” but lately I’ve been questioning more, like, what really happens? I just want somebody to come back and let me know, but I really have no idea. I’m just hoping for the best possible scenario. 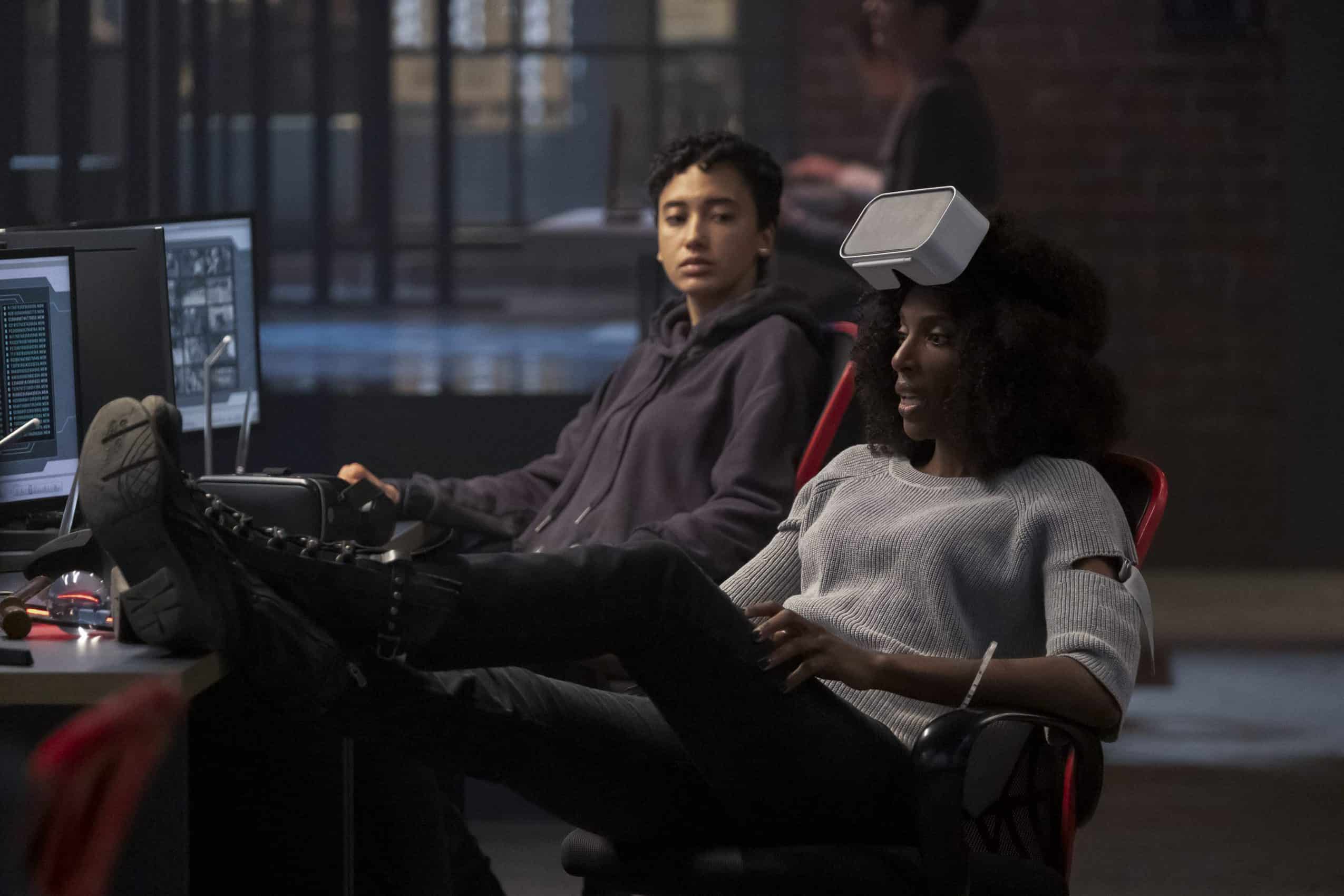 Allegra Edwards: I had a moment on set that I described later to my dad as probably being the closest thing to heaven on earth. It was my very last shoot day on Upload and Andy [Allo] and I had just wrapped for the season and we were in a Stanley Park, in Vancouver, and we had just walked past this white horse they were using as a unicorn and Greg Daniels had ordered an ice cream truck to come to the park that day and Andy and I were just licking our ice cream cones, and everything was in bloom and Robbie was reshooting a scene from episode one with a bagpipe quartet and people playing croquet amidst the flowers and Zainab and Kevin were shooting the Easter egg hunt from episode eight or nine just a few yards away and I was eating this ice cream cone, having just wrapped my very first shoot as a series regular and time just collapsed — the present and the future and the past were kind of spinning and it was all just peace and joy and fulfillment. So when it ends, if it ends, I hope it’s like that — more of a feeling, something outside of our current physical experience.

Uploading aside, how do you feel about technology in general?
Kevin Bigley: I feel like so many of us just gleefully usher it into our lives without understanding it whatsoever. I just agree to these terms of use without understanding them and I probably understand about five percent of what my phone does. And I think what scares me most is probably my lack of suspicion. I don’t know what this stuff does or how it works and I don’t even really care and that’s pretty scary to think about.

Zainab Johnson: Technology to me is like… have you ever climbed a mountain? It’s like, you’re standing at the bottom and you look up at the mountain and it just seems impossible, but you just start taking one step at a time and, eventually, you make it to the top of the mountain. So its like, if you told me to get into a self-driving car tomorrow, I’d probably be like, “No!” But then, if I really think about it, it’s like, I’ve already been trusting Uber drivers and Lyft drivers and Taxi drivers to get me somewhere safely, so why not? It’s just about taking that next little step and eventually I’m on the moon!

Allegra Edwards: I’ve always been really slow to update if something works for me. It may not even be anybody else’s definition of operational, but if it works well enough for me, then I don’t replace it. I don’t update it. I have an iPhone 6 and it works fine. So, yeah, I find myself being a little bit more resistant to new tech, much to the Chagrin of my loved ones. But I’m like, “I’m okay! Just let me be me.” I don’t want to be stuck in the shiny grip of technology. Although I still am, so… 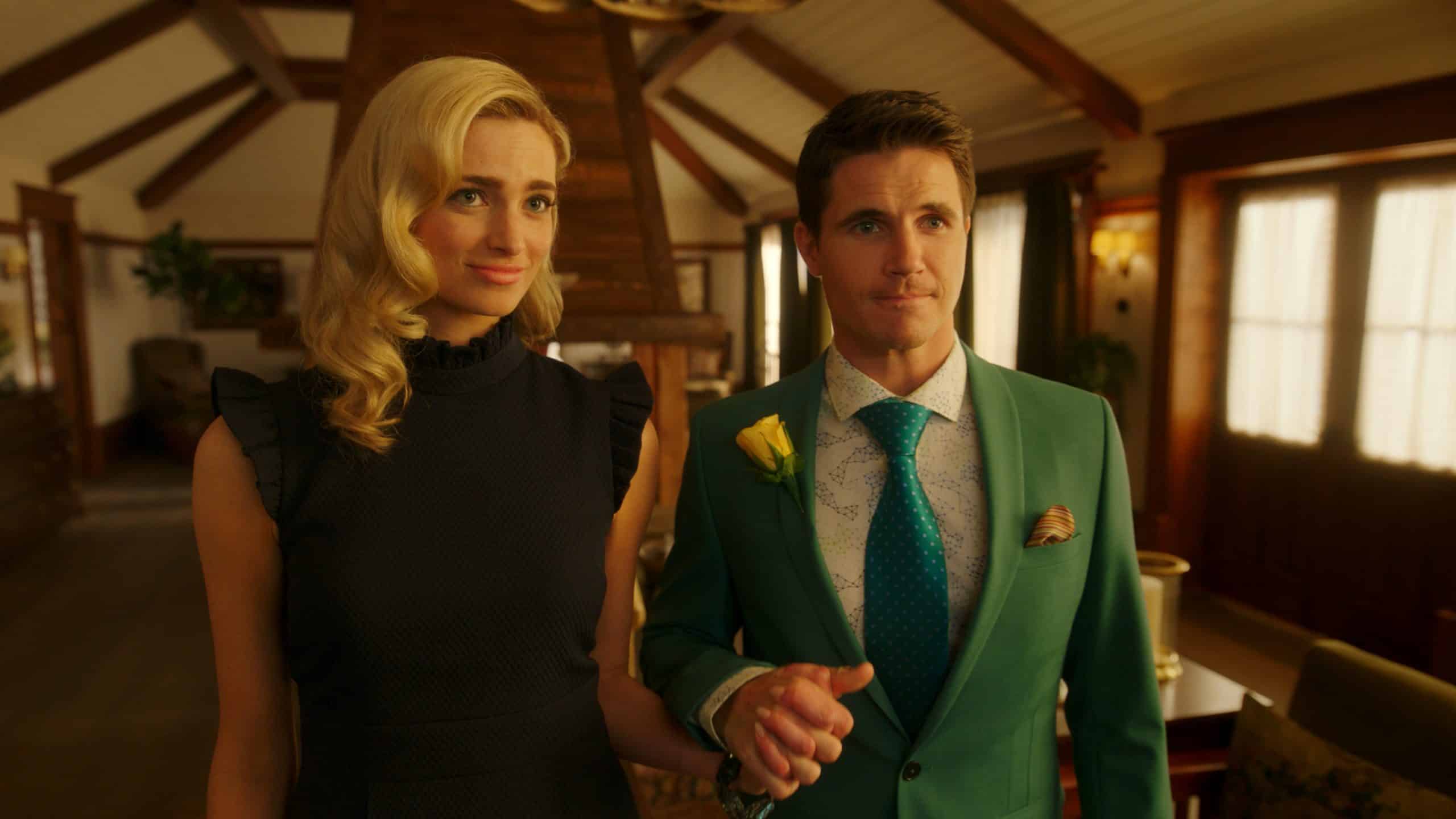 Yeah, there’s really no escape. What is the most disturbing thing to you about the world depicted in Upload?
Allegra Edwards: I’m probably most excited and most disturbed by the idea of the hug suits. The intention is great — that desire to connect physically with people you have lost makes sense — but that scene where it’s inside out and you just see all those rubber fingers filled with water. That’s disturbing.

Could you rent a hug suit, like people do on the show?
Allegra Edwards: I, for sure, would not be renting. I would have to own and it would have to get deep cleaned by someone I trusted and then maybe watch them clean it. That or I’d just get a new hug suit every time.

Kevin Bigley: I think the way they dissect someone’s DNA and then put them back together and then use that to cater their ad experience in upload, that, to me, is terrifying.

If this show ends up being a hit, do you think you’re ready to be famous?
Zainab Johnson: Yeah! But is that the polite thing to say?

Zainab Johnson: Of course, I would love to be a part of, not just a hit show, but something that people could go back and rewatch and enjoy it as though they’re seeing it for the first time again. And if us making this can give people that feeling, for however long we get that opportunity, I think that would be everything I could hope for. And, of course, for autographs, I’m practicing my signature now. 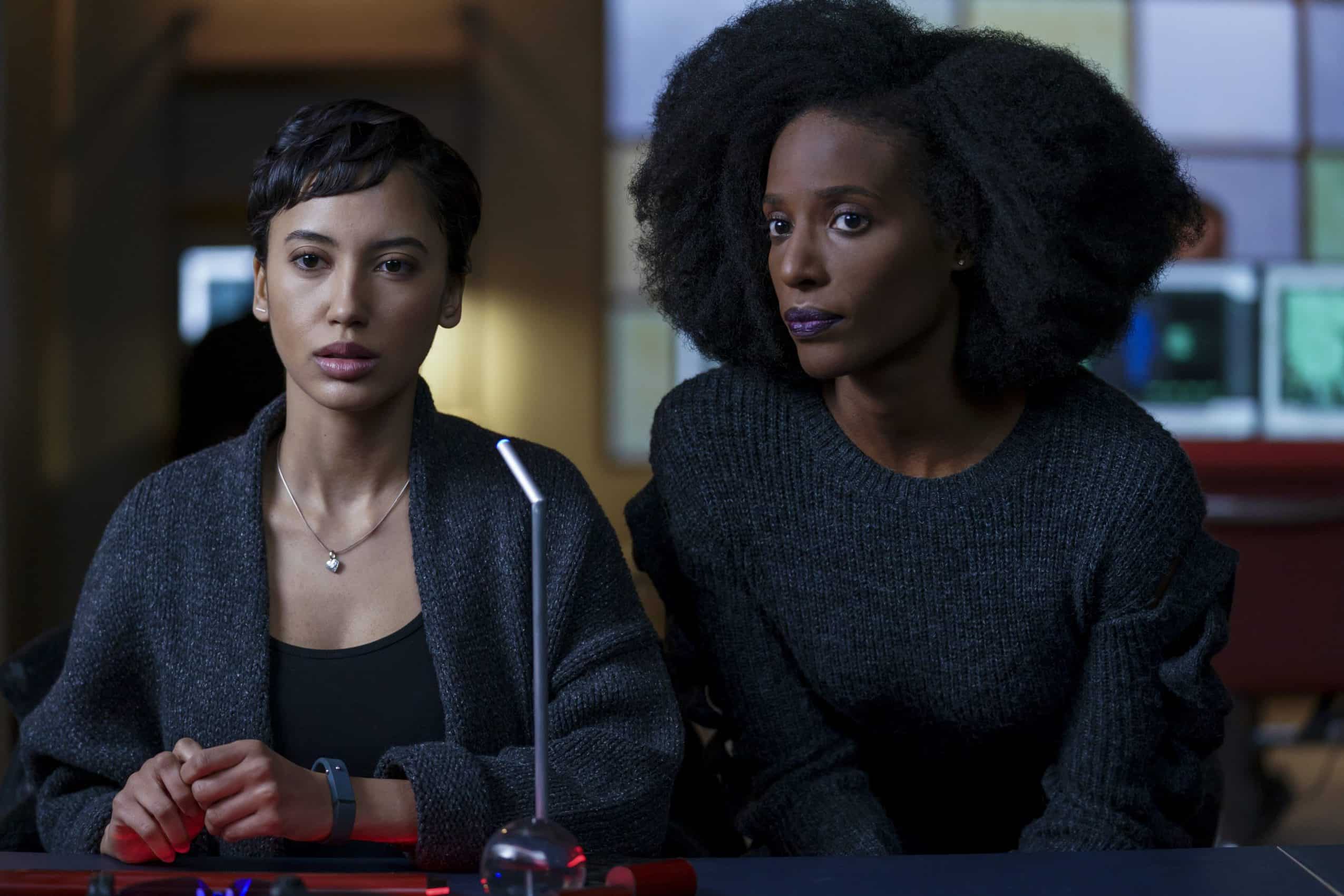 Kevin Bigley: Parcticing your signature? Is it going to be different than your normal signature?

Zainab Johnson: I don’t want them to be able to forge my signature!

Kevin Bigley: I like that. See, you’re already thinking like a star! I don’t know, though. For me, I’m always afraid everything is going to fall apart. It’s hard to be a star if you’re locked in quarantine. Like, my wife, the other day, she did this thing she does when she gets frustrated [scrunches up his face, tenses his body and lets out a groan] and I have this gag that I’ll do occasionally where I’ll act like she has a power or something, like she made me burst into flames, and I did it for like the umpteenth time and she just started crying and was like “I’m just so tired of your jokes!” So, you know, I feel like I will never ever really feel like a “star” because I have her there to be like “easy there, buddy. You’re not cracking anybody up over here.

Allegra Edwards: I love that so much. Yeah, you should surround yourself with people that bring you back down to earth. I think that’s necessary, for sure. I think like what Zainab said, my hope would be that the the show connects with people and gives them joy and makes them think and is something worthwhile to return to again and again. That would be my greatest hope. But as fun and cool as stardom or celebrity sounds — and for sure, little Allegra was paying attention to who’s on that magazine cover and who’s on that billboard or whatever — the reason I’m still in this and doing it has to do with the storytelling and the people that we get to work with. And if those nice, flashy, shiny things help create more opportunities for work, then I’m all for it. But other other than that, that’s not the part I’m actually looking forward to.

And it’s like, the press tour for this show, for example, is not going the way that I thought it would. You know, I let myself daydream about what it might look like, and I never imagined we would be doing these interviews over Zoom. We’ve got a billboard taking over the side of a building, which most people will probably never see because they have to stay home and I’m like, “Okay, Allegra. Are you on this show and in this business because you want to be on building or because you enjoy storytelling and you enjoy the people that you work with and learning from great showrunners and creators like Greg Daniels and trying to get better and learn new things about what it means to be human? Because that’s that’s what these stories do for us. 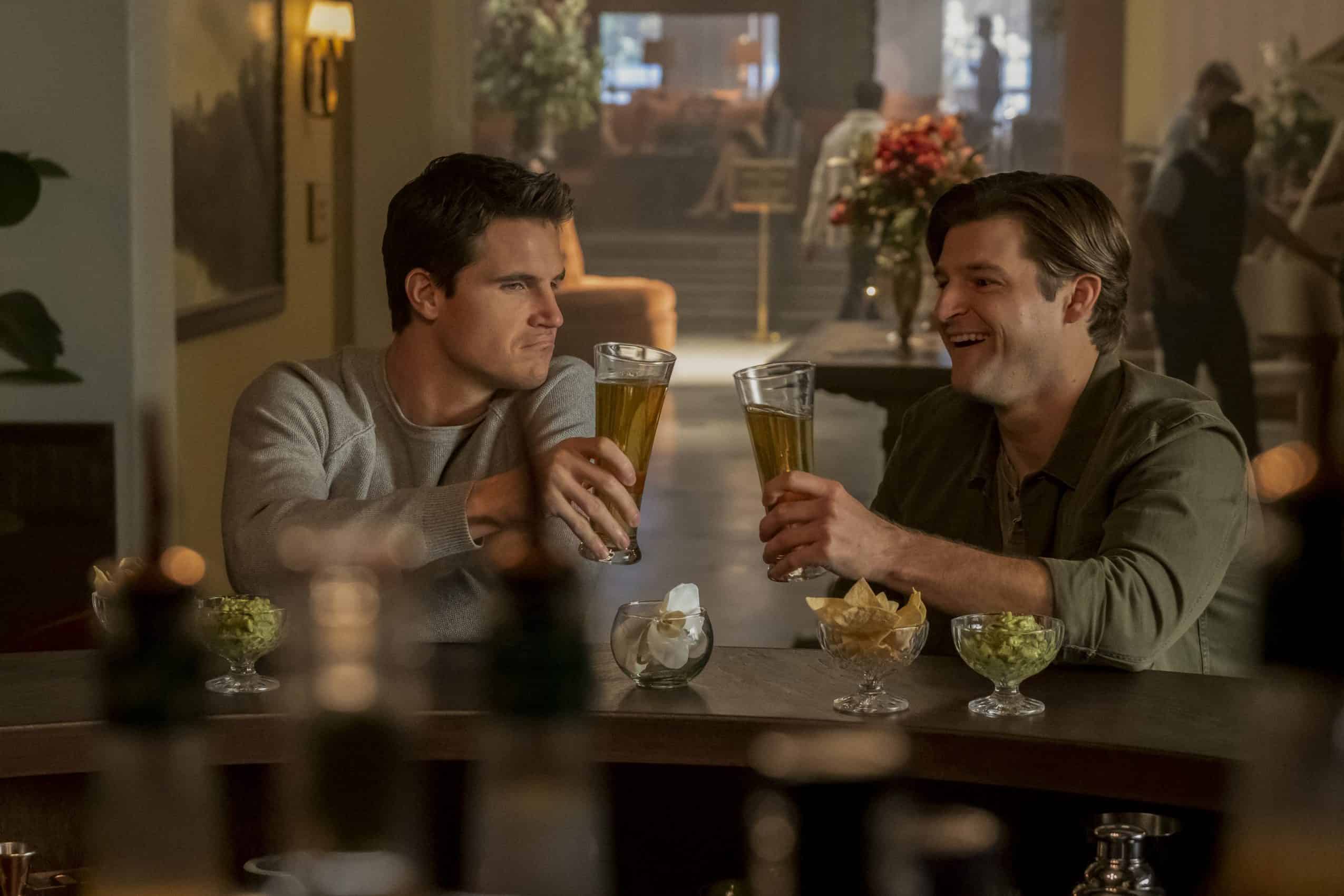 Kevin Bigley: Yeah! And the fun thing about “fraud complex” is that the more you experience, the less real it feels, too, because it’s happening to you. So that billboard, it was like, “Oh my god, I’ve always wanted this. That’s incredible. What a feat!” But then you see it and it’s like, “Yeah, but I’m on it, so it’s not like a real billboard.” But I mean, I think most of us are really just focused on the job more than anything. That’s what’s good.