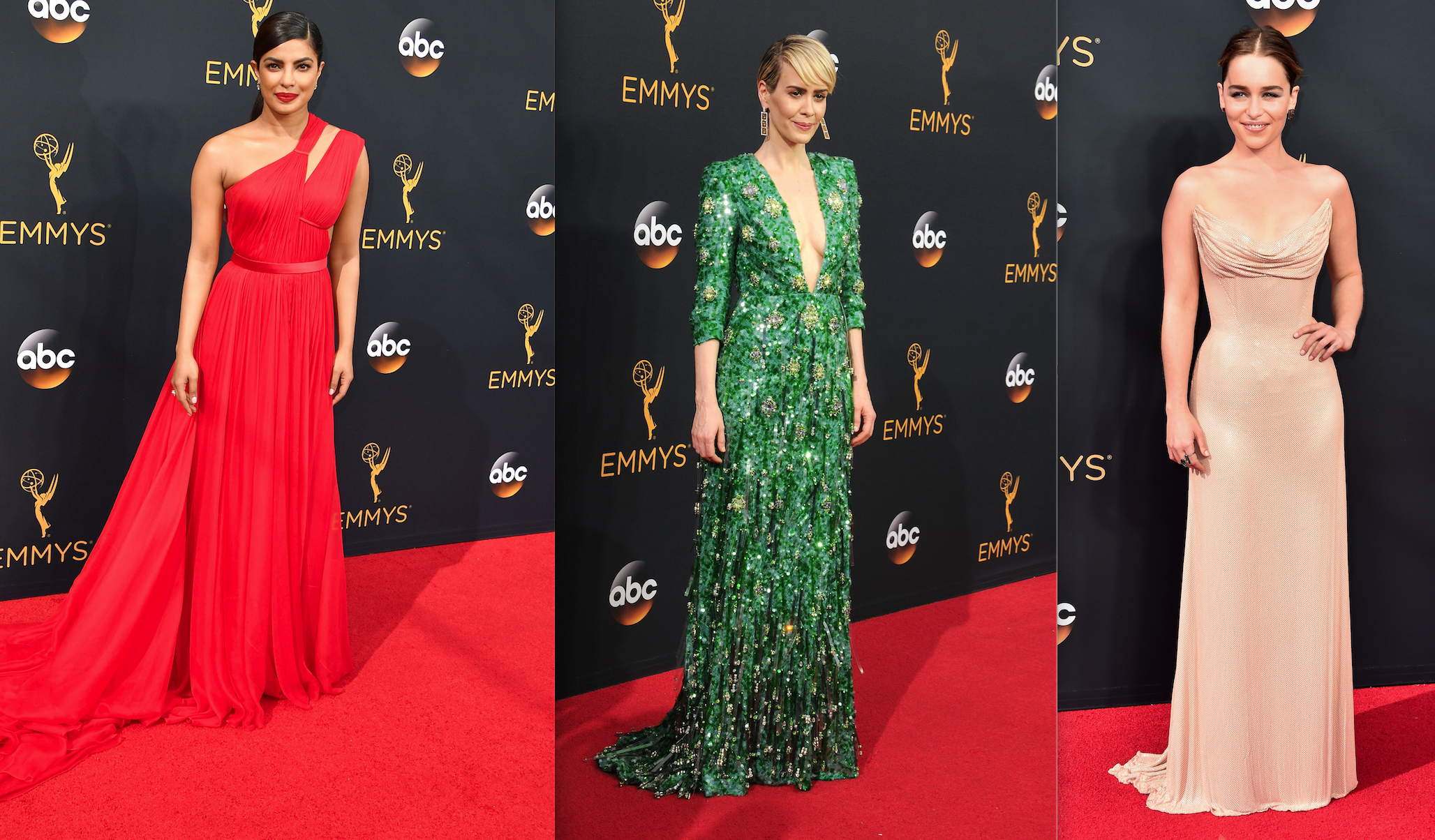 So why was the Emmys red carpet so low key this year? There were no ballgowns outside of Kristen Bell’s Zuhair Murad—no prints outside of Bell’s garden—and very little of daring, outside of Sarah Hyland’s Monique Lhullier white embroidered strapless peplum over black pants or a very pregnant Kerry Washington‘s cut-out Brandon Maxwell gown. It seems like the more credibility television gets, the less risk the ladies of the prime time comedies and dramas want to take with their looks. The stakes get higher, and the fashion gets tamer; that’s the red carpet biz for you.

But that’s the bad—and the good—news. While there was little fun and frivolity, there weren’t really any serious missteps, either. Some opted for dresses that were a touch too revealing, but generally, it was a night of classic silhouettes, ruffles, strong colors like bright yellows, greens, and reds; cut-outs, ruffles, lobs, bobs—and high ponytails.

The yellow moment lightened up the night and freshened it up too. There were all different hues of the color: Ellie Kemper’s Jenny Packham had a gold brocade pattern on the slim column cut. Taraji P. Henson’s Vera Wang was the color of the sun. Angela Bassett did a full kimono gown in soft yellow by Christian Siriano. Mandy Moore’s marigold Prabal Gurung was a combo of chiffon sheer and pretty ruffles. Minnie Driver rocked her killer figure in a yellow Versace tea-length with cut-outs. And Amanda Peet’s Altuzarra black combo gown had a yellow bodice inset that caught the eye and spiced up the black dress.

White—stark, cut close—is also a red carpet stable, but it rarely feels tired. Emmy Rossum in Wes Gordon, Tracee Ellis Ross in Ralph Lauren and Julie Bowen in Lela Rose all proved why it’s so classic. Michelle Dockery’s strapless Oscar white gown was all ruffle tiers – but with black piping, it was charming and feminine.

Cut-outs were a big trend of the night. Kerry Washington looked fabulous in her Brandon Maxwell black gown. Minnie Driver opted for a cocktail dress by Versace with subtle cut-outs that also showed off her incredible figure and the cut-outs on Tracee Ellis Ross’s Ralph Lauren were also chic. Sofia Vergara certainly wasn’t going for subtle, but her Versace gown was definitely highlighting her most famous assets.

There will never be an awards show without ubiquitous black gowns—but this year’s Emmy’s played with black in a textural way. Sophie Turner’s Valentino gown had illusion details, as did Kirsten Dunst’s beaded Givenchy by Riccardo Tisci haute couture column gown. Dunst once again went for a plunging and very revealing deep V. Her stylists, Nina and Claire Hallworth, told People, “The dress is weighty, completely beaded with intricate hand-sewn jet beads—but it has the ease and comfort of a t-shirt.” Julia Louis Dreyfus’s Carolina Herrera black illusion gown, her stylist Cristina Ehrlich tells The Daily, “was one I discovered in their resort 16 collection. Considering that last year, Julia wore a very sleek streamlined black dress that was all about the jewelry, we wanted to see her in something that felt a bit more nuanced and intricate. Overall, the dress is something that represents a really classically beautiful and fun moment for Julia at The Emmy’s.”

Soft ruffles floated down the carpet on Michelle Dockery (Oscar de la Renta), Mandy Moore (Prabal Gurung), and Game of Thrones’ Hannah Murray (Philosophy di Lorenzo Serafini). Murray was styled by Ilaria Urbinati, who had eight clients in one night (mostly men)—and seven at the Toronto Film Festival. Not only that, she’s a newish mom with a brand new house. “You could stay I’m tired,” she laughed at the end of the night.  By Merle Ginsberg