Dancing The Night Away: The Stephen Petronio Company Spring Gala 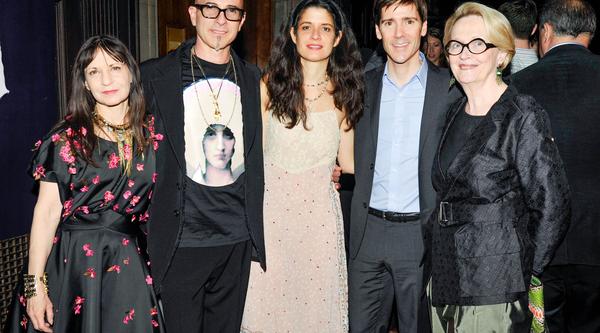 (NEW YORK) It was a moving evening last night at the premiere of lauded choreographer, dancer, and artistic director Stephen Petronio‘s world premiere of his modern dance performance, Like Lazarus Did. Petronio, the art darling of the modern dance world, often collaborates with artists like Cindy Sherman, Anish Kapoor, and Donald Baechler as well as fashion designers like Rachel Roy, Adam Kimmel, Benjamin Cho, and Tara Subkoff. Serving on the committee for the gala were big names like Sherman, Steven Klein, Lucy Liu, John Demsey and Dustin Yellin. The latter of whom showed up with Michelle Williams on his arm. But, we hear the duo are purely platonic.

Petronio’s opening night gala started off at Chelsea’s Joyce Theater, where The Young People’s Chorus of New York City opened the performance in a procession of all black through the aisles of the theater. “For this project, because I was working with slave spirituals from the 1800s, the choir was a no brainer,” said Petronio. “It’s a super famous choir and the kids are from every different race, culture, and background.” The choir procession was led by the astoundingly beautiful music of Ryan Lott who performs under the name Son Lux. Lott was accompanied by violinist, Rob Moose, and trumpet player, C.J. Camerieri, both members of Bon Iver. How did they get together? “They [Moose and Camerieri] created a chamber ensemble called YMusic and they collaborate with a lot of indie bands and forward thinking musicians,” said Lott. “For their first record they commissioned a piece from me.” As for Stephen? “Like Lazarus Did is similar to what I do normally, which is one of the reasons Steven wanted to work with me.” Stay tuned for the music from the show to appear on iTunes in the near future.

After giving a stunning and soulful performance, the dancer from Steven Petronio mingled among the crowd at the after-party held at what will soon be the new High Line Hotel in a few weeks, which is the beautiful old building in Chelsea that was formerly the General Theological Seminary. Company dancer, Emily Stone, who was a stand out on stage at 5’11” started out in ballet before venturing into modern dance. “My mom was a dancer and trained at New York City Ballet, but she never fully realized her career,” said Stone. “Actually, because she knew I was going to be really tall, she didn’t want me to be awkward so she put me in some movement dance classes.” Was it tough finding a path in the dance world at her height? “Oh yes, I really had to audition a lot. Sometimes you have to have male partners that can match you height wise and sometimes directors want specific proportions,” said Stone. “But Steven saw something in me and it’s been really great.”

And how did Petronio dance his way to the top? “I was studying medicine at Hampshire College and I took a dance class to relax. Then, the thunderbolt hit, but I took my first dance class at 18,” said Petronio. And there you have it, it’s never too late to do what you love!
PAIGE REDDINGER

UNIQLO Puts Fall On Our Mind For A Minute

A Moment with…Rachel Roy at the Hamilton...