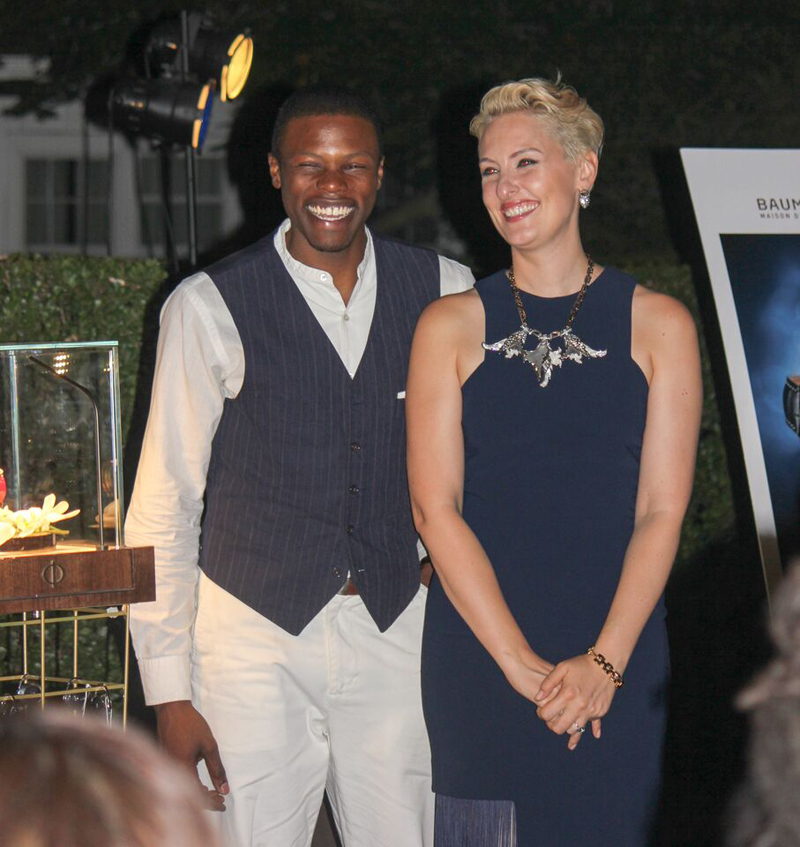 The engagement of Lisa Salzer, Lulu Frost designer and all-around fashion impresario, and Marlon Taylor-Wiles, a dancer, choreographer, and fellow designer, was cause for celebration. So on Saturday night, The Daily Summer and Baume & Mercier did so in style with an intimate dinner at c/o The Maidstone in East Hampton. Salzer and Taylor-Wiles brought out a coterie of friends and chicsters, including Harper’s Bazaar’s Tara Lamont-Djite, stylist Paul Djite, Le Brain’s Alex Dickerson, United Arrows’ Masako Kaufman, and Troy Alexander, to toast the couple and check out the latest styles from Baume & Mercier’s Promesse collection, which nods to the brand’s heritage of celebrating major life moments. Promesse is inspired by the romantic tradition of sweethearts attaching “love locks,” or padlocks on which their initials are inscribed, to the Pont des Arts before tossing the key into the River Seine. Guests were each given a padlock and asked to inscribe their own personal promise before locking it to a constructed bridge modeled after the famous, romantic bridges in Paris. “It’s so great to see so many of the people I love in one place,” said Salzer, greeting Baume & Mercier’s Rudy Chavez. Guests enjoyed cocktails—Cointreau Rickeys, Whispering Angel Rosé, and Peroni—along with Evian before tucking in to The Living Room restaurant’s signature meatballs, seared salmon, and smoked oysters. Over dinner, talk turned to Lenny Kravitz’s recent exposé (which we’ll spare you from regurgitating here) before moving on to less salacious matters like, you know, weddings. “We’re getting married at Gurney’s!” revealed Salzer, whose September nuptials will be accompanied by music from Winston Irie & The Selective Security Band, the band playing at the party where she first met her fiancé. As for the dress? “I actually went to Kleinfeld,” she admitted. “I’m a big fan of Say Yes to the Dress.” She ended up, however, with a killer creation from Romona Keveza, which the designer customized especially for her. Watch this space for more details!

Fashion Week Kicks Off with The Daily...

Baume & Mercier and The Daily Summer...