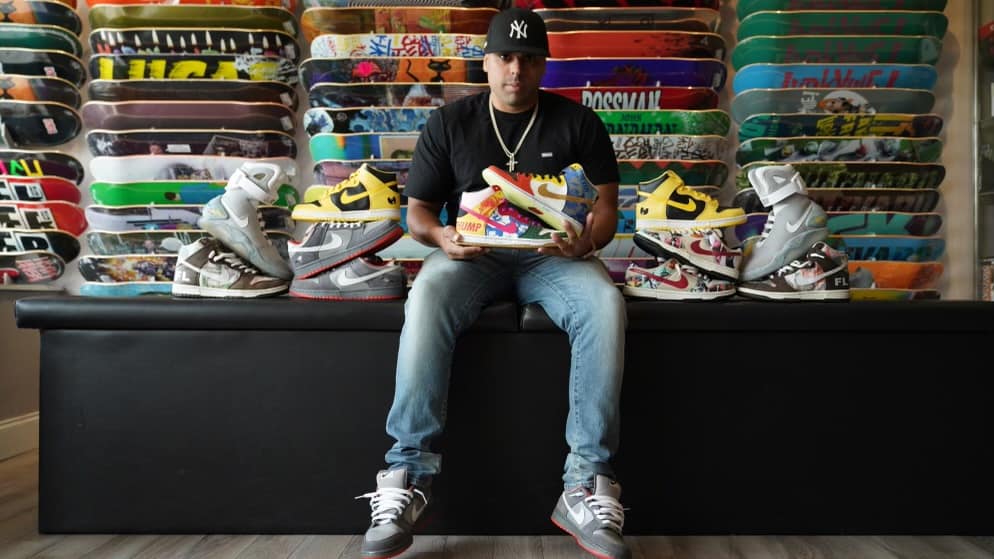 For most people, when they think of success, they tend to associate it with education or business. However, for Chris Robinson his success comes in the form of sneakers particularly skateboarding sneakers or more commonly known as SB sneakers. Chris Robinson has been a huge fan of sneakers since he was a young teenager, so it is no wonder he became a successful sneakers collector. Not only is he great at collecting these types of shoes, but he also has a knack for business. He now has a sneaker store that he is very proud of and has been successfully running for over 10 years now.

How Chris’s Success Came to Be
It was at the age of 14 when Chris started working a paid job. After receiving his very first paycheck, he immediately bought himself a pair of Nike sneakers. From that moment on he started his journey to create a collection of unique and stylish sneakers that has become one of the most admired collections in the world.

How did he fall in love with sneakers?
Chris Robinson grew up and has lived most of his life in Long Branch, New Jersey. Unlike most of his fellow students at school, he wasn’t as fortunate to afford luxurious clothing, and this includes sneakers. Through this experience, Chris was determined to start a passion that would one day help him afford such things for himself and his family.

What is he doing now?
Chris Robinson still loves sneakers, especially SB sneakers. Although his first business back in 2007 only lasted until 2009, he persevered and set up another much more successful sneaker store in 2011. This time he had the managing help of a close Instagram acquaintance and fellow sneakers collector DJ Senatore, the number one Reebok collector in the world.

Taking a Look at Chris’s Potential Future
Besides collecting and selling sneakers, Chris has done a lot of charitable work. Two such examples were donating $15,000 to Michael J. Fox Parkinson’s Foundation from purchasing three pairs of Nike Air mags and $11,000 to Doernbecher Children’s Hospital after buying a pair of the What the Doernbecher Nike Dunk from an eBay charity auction.

Chris’s tips and advice for young entrepreneurs
At his core, Chris Robinson cares deeply about people. His passion certainly goes beyond that of shoes and charity. It reaches the hearts of young entrepreneurs too. That is why he is also considered an influencer, inspiring many young people from all walks of life to pursue their dreams. One of the lessons Chris learned during his years of working hard searching for that one-of-a-kind pair of sneakers is to never give up. In fact, it was his diligence and persistence that led him to finally achieve one of his life’s goals – to become financially stable enough to provide for himself and his family.

Chris’s future goals and plans
In 10 years, Chris’s vision is to continue to expand his sneakers collection and reach a net worth of $5 million. His ultimate dream is to eventually design his own sneakers with Nike SB. For most people, these goals are quite ambitious. However as Chris’s successful life and experiences have shown us that whatever your dreams are you can accomplish them if you put your mind to it. From starting out as a sneakers collector in a small town on the Jersey Shore to later becoming an entrepreneur/influencer, Chris definitely sets the stage for how others can achieve their dreams