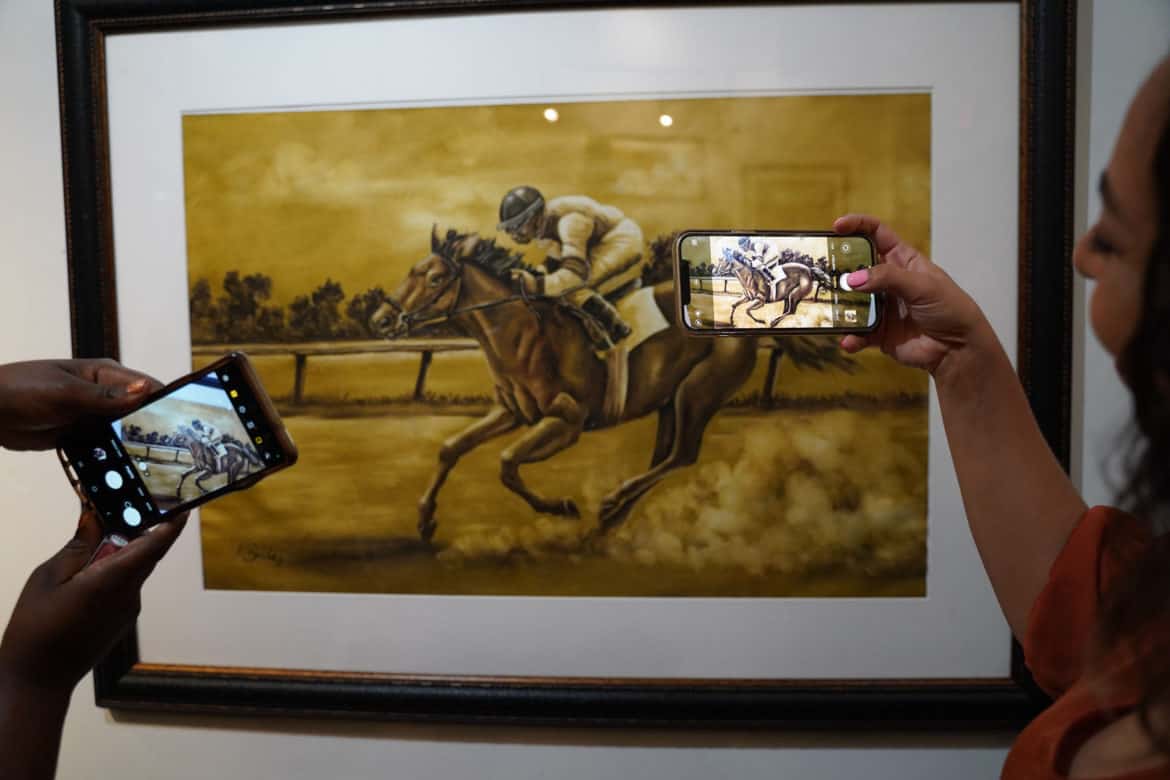 This month in Miami as part of the Pegasus World Cup, Baccarat proudly presents “Too Black Too Fast,” a curated art exhibition celebrating the history and contribution of African American jockeys in Thoroughbred horse racing through visual art and portraiture. With multimedia pieces from artist Michael J. McBride and sculptor George Nock, the show at the Historic Ward Rooming House in the Overtown neighborhood tells the story of Black jockeys. These pioneering men played an integral role in the history of Thoroughbred horse racing. McBride tells The Daily how he discovered them and why it’s important to tell their tale to a new generation.

How did you first learn about these jockeys?
This started in 1991. I had a good friend who had an African American bookstore that dealt in art and culture. I had done some things with him before on soldiers. He was contacted to ask if he had anything dealing with Blacks and equestrians. He then contacted me and asked me if I knew anything about Black jockeys, and I said I had never heard about Black jockeys. He said, “This might be something you want to look at and check out.” I went to the library and looked up horse racing and saw this book called Racelines, by Philip Von Borries. At the end of the book, it had this whole section about Black jockeys. I was blown away by it. We started to research, and being an artist, I knew art was the best way to visualize and show what it is that I had discovered and present it.
Was there anything else written about these jockeys, or was it pretty minimal?
There was a lot out there, which was so surprising to me. It’s amazing what’s out there, but nobody had thought about it. It’s never mentioned in the racing world.
What did you learn about these guys?
One of the main things that I learned about it was that there was such a partnership between the jockeys and their masters. They weren’t treated as Black slaves. They were well fed, well kept, and dressed well. 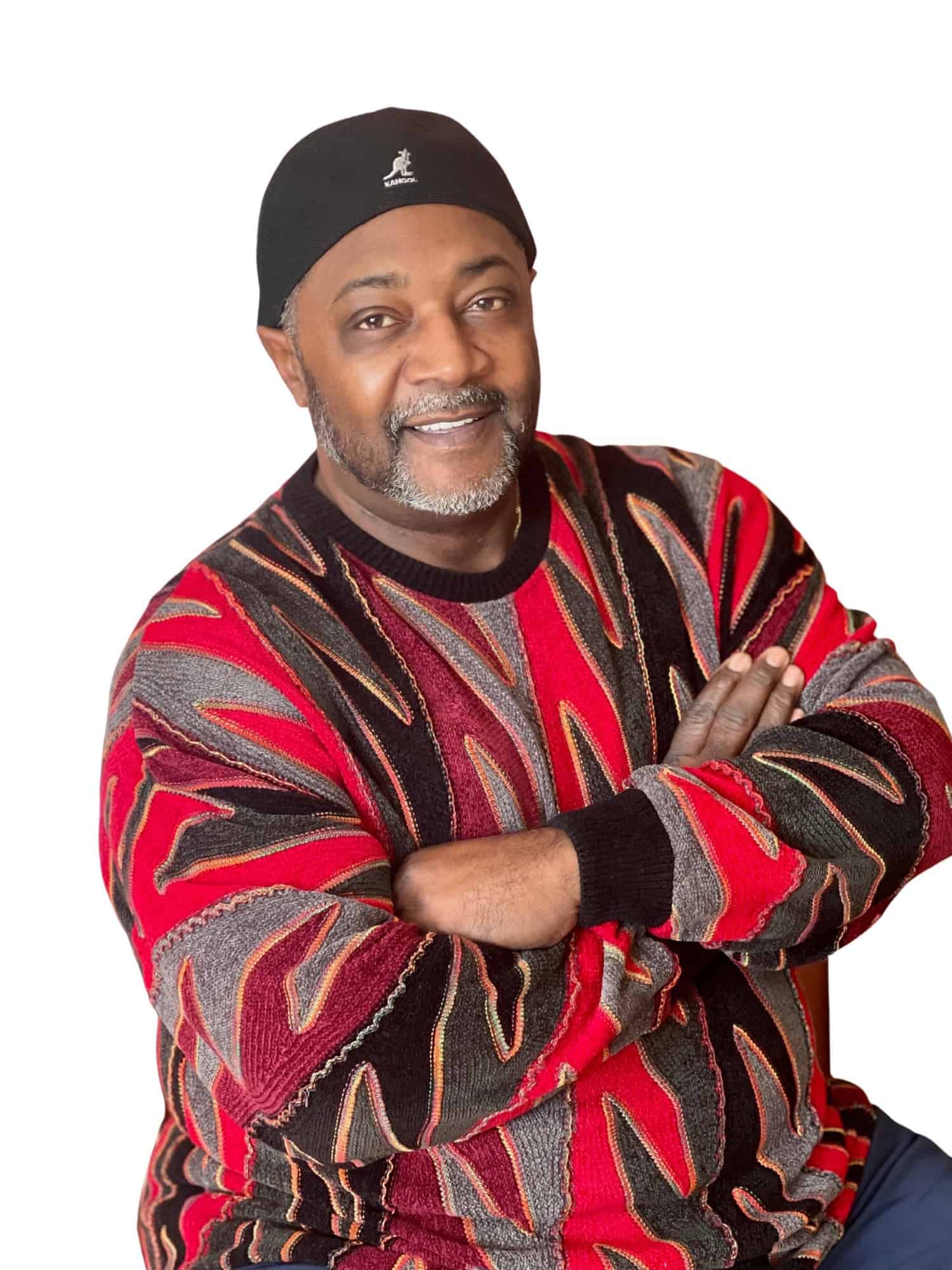 What can people expect to see at the exhibition?
Actual portraits of some of the jockeys that I had access to through photographs and the other things I created from the book The Great Black Jockeys: The Lives and Times of the Men Who Dominated America’s First National Sport, by Edward Hotaling. He got most of his information from Belle Meade Plantation in Nashville.
Why is it important to tell these stories?
As an African American artist, I think it’s important that our people see all the great things we’ve done. It’s another one of those areas that was untapped and untold. One of things I feel is my duty as an artist is to be able to show these things visually. We are a visual society. We experience and are affected by things that we see. The exhibition gives an option to young kids who might not be big enough to play football or basketball, that this is an industry where you can be a hot walker or trainer. There’s all kinds of aspects to it. 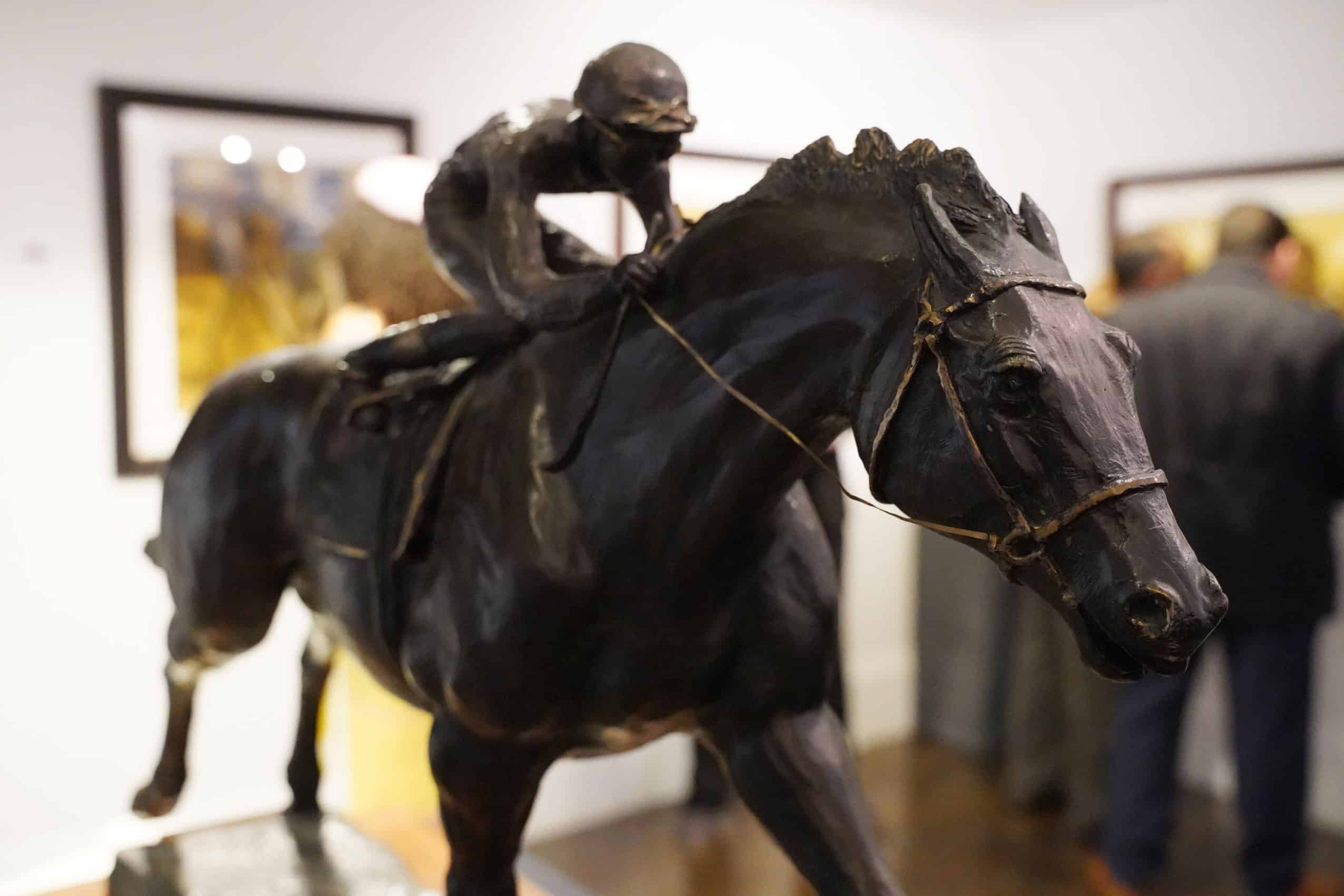 You’ve been working on this for decades. How often does the exhibition get shown to the public?
We were showing it up until 2012, and we stopped and started reevaluating how we want to proceed further. Technology and a lot of different things had changed. We wanted to keep the exhibition fresh and informative. This is the first time we’ve brought it back out. We were contacted by Pegasus World Cup, which had heard about it. We started talking and put it back together. We’re excited to have it back out and excited for their support and the support of Baccarat.
How many pieces are in the exhibition?
There are 24 oil paintings and six bronze sculptures done by my artist friend George Nock, who has since passed away in 2020 from COVID. We weren’t able to finish the series. We are hoping he left some waxes that he had done and not cast. We’re hoping to get that done.
The exhibition is free. How long is it going on for?
It’s through February 13 at the Historic Ward Rooming House in Miami. The exhibition will be available for public viewing every Thursday to Sunday from noon until 6 p.m.
Have you gone to any Hollywood producers with this story? It seems like a film waiting to happen.
We have a synopsis that I came up. It’s a multimedia project. We’re looking at a documentary; we have a play that we commissioned; we have a soundtrack being produced. We have a whole educational package. We have all kinds of stuff! 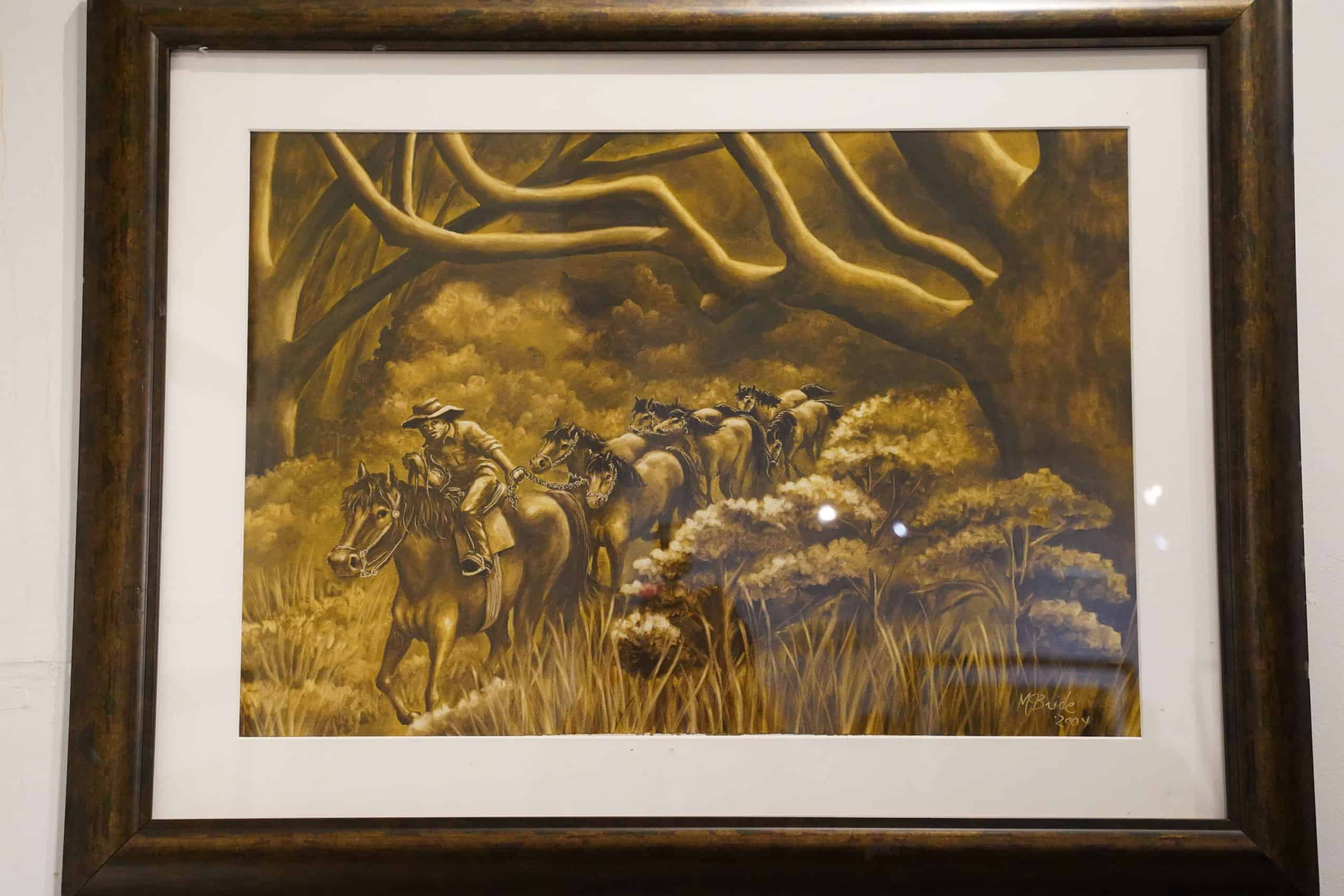 Do you have any dream actors to play the jockeys?
We have talked about it! We’ve talked about Don Cheadle or Kevin Hart. We’ve kicked names around. There has been some Hollywood interest. The whole idea about the movie is we want it to be a contemporary movie; we want it to draw in young people.
Why did Black jockeys stop riding?
The Jim Crow laws where Blacks and whites became segregated. Before that, nobody was segregated. Everybody mingled. It wasn’t until 2002 that another Black jockey raced again.
Tell us about your love of horses!
I’m a country boy from west Tennessee. We had horses. From age 8 or 9, I’ve raised horses and loved them. This was close to me. I’m also a history buff, so that made it even better.
What do you do besides putting the exhibition together?
I’m also a book illustrator. I’ve illustrated more than 80 children’s books. The current book that I’m working on is about the African American artist Ellis Wilson, who was a painter from the Harlem renaissance. I’m also a muralist. I’m scheduled to go to Nairobi, Kenya, with a university to possibly paint a mural there. I just finished the largest African American mural in downtown Nashville of the late Congressman John Lewis. 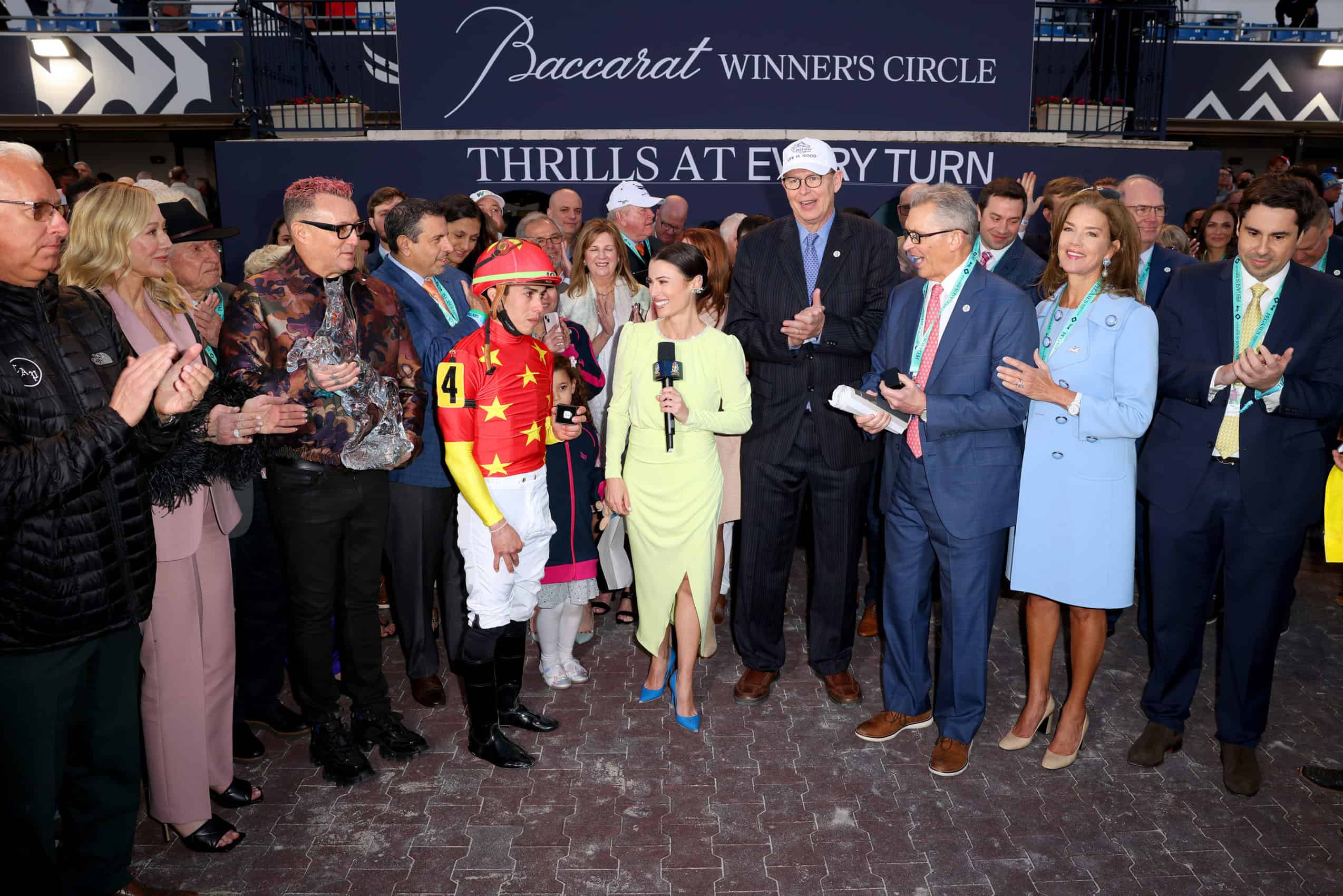 The Baccarat Winner’s Circle during the 2022 Pegasus World Cup at Gulfstream on January 29, 2022 in Hallandale, Florida. (GETTY IMAGES)

“As a proud sponsor of the Pegasus World Cup, Baccarat is honored to partner with the Historic Ward Rooming House to present “Too Black Too Fast.” The exhibition is just one retrospective of the many untold stories of Black excellence in America. The hardship and the courage of these Black jockeys is unmeasurable. Even today, these jockeys hold records and set the standard for all jockeys in the industry, yet we don’t hear of their accomplishments. Baccarat is grateful to have the opportunity to help tell their story, as these athletes played an integral part in our history.”—Jim Shreve, President and CEO, Baccarat North America

Leather Galore! 13 Dreamy Made In Italy Bag Labels To Flaunt This Season

‘It Should Be Fun!’ Angie Mar Of Les Trois Chevaux On Why Fine Dining Is Just Like Fashion