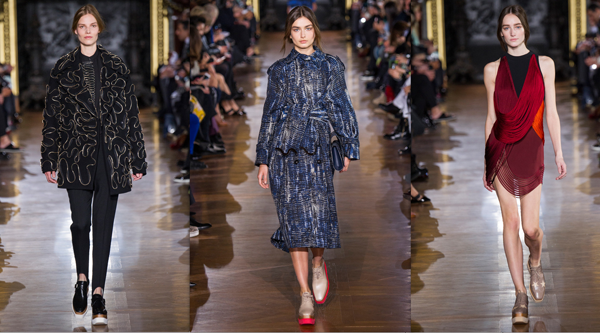 (NEW YORK) Stella McCartney
Sporty with a side of squiggly. Stella McCartney‘s Fall show had that laid back appeal that’s been so pervasive this season, but she spiced it up with 3D golden, curvy lines that embellished everything from overcoats and pantsuits to knit sweaters and mini dresses. Then there were the unembellished knit pieces with extra sleeves that came from the bottom and tied around one shoulder—they were so cozy you might consider sleeping in them. On the fringe front, one sweatshirt top and long skirt in black and green fringed detail was particularly cool. It was the shibori tie dye on a navy and white trench coat or a cherry red and burgundy sweater dress that felt pointedly fresh—quite a feat given that the season is nearly wrapped, so trends are already overwhelmingly clear. The show closed with a series of draped fringed mini dresses plus a few evening pantsuit looks like a tube top draped with green fringe worn with stirrup pants. You’ve got to love that McCartney can revitalize the tube top and stirrup pants and actually make it look cool again. Then there were the shoes, which were such standouts, they almost became a focal point. We imagine many an editor will be seen in these come Fall.

Elie Saab
Vino vision! Saab left us craving a glass or two of Pinot Noir thanks to the lush parade of Bordeaux pieces that kicked off his Fall collection, replete with velvets, sensual sheer chiffon layerings, and other touch-me worthy fabrications. Then, it was onto a delicate slew of blush looks, beginning with a lengthy flared ombre tunic over a brief mini, with the gradation of darker hues pulling the eye to the super-cinched waist, which sported a blush belt that slightly resembled a chic seatbelt. The furs fared spectacularly well on the blush looks. A luxe mauve chubby cropped at the elbows looked divine (and a little ‘90s R&B diva, in the best possible way). So did a sleeker, equally cropped and petitely-proportioned fur bedecked in a plush black fur collar, worn over a peplum-trimmed flared pantsuit, all in that same mauve-y hue. Post-pink, Saab dabbled with some sensible black wardrobe staples set apart thanks to a large-scale yet sparse floral pattern, which segued into the prime frock territory Saab’s adorers flock to him for. Romantic black lace, elaborate beading, and diaphanous pleating offered some new black-tie options come Fall, fairly body-con and flooded with just-sexy-enough slits.

Emanuel Ungaro
Plenty of B&W paraded out for Fall chez Ungaro, in swirly rosebud motifs. Some of said blooms were also trotted out in rouge and pink. Paired with crimson-trimmed, flouncy black leather minis and peplum-ladden tops, the effect was a bit tarty, and certainly for a younger, cutout-addicted crowd. Creative director Fausto Puglisi’s sheer dotted sleeves and bodices on some frocks didn’t exactly feel fresh, but they’re tried and true enough to sell. Opt for the collection’s boxier cuts, like a stiff, leather-accented black and white trench, or a wide-cut pair of trou emblazoned with buds, instead.

Hogan Enters The Realm Of RTW For Fall 2014

Couture Diary: An Inside View with Stylist...