New York Dedicates 'One Night Only' To Giorgio Armani 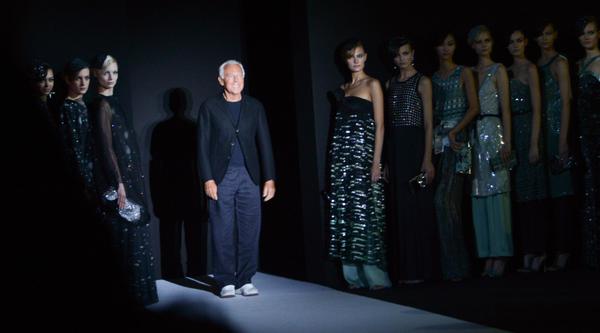 (NEW YORK) With a nod from Mayor Michael Bloomberg, October 24th has officially been titled Giorgio Armani Day. How does one get a day named in their honor? Having a successful flagship on Madison Avenue doesn’t hurt and neither does bolstering the local economy with charitable donations and contributions. For an honor this big, the designer will be stateside for the first time in four years. The celebrations will begin with Armani’s “One Night Only” event at Hudson River Park’s SuperPier where a collection of clothing, accessories, and never before seen photography will be displayed in an updated version of his “Eccentrico” installation.

The “One Night Only” events have also taken place in Bejing, Tokyo, and London. Tonight’s event in New York will include a retrospective runway show featuring Lindsey Wixson, Liya Kebede, Christina Kruse, and Frankie Rayder. The show will include over 100 looks spanning from Giorgio Armani Privé’s 2005 collection to the Fall couture looks that debuted a few months ago. The evening will end with a visit to the pop-up Privé club where DJ Mark Ronson will be spinning. The custom venue took a whopping 12 days to construct. Other celebratory measures have been taken, such as the release of a “Nude” ready-to-wear collection based on couture looks, which will be available exclusively at the Armani Madison Avenue boutique and Bergdorf Goodman. The brand has also relaunched their website, which will play host to coverage of tonight’s event with editorial oversight by Style.com’s Tim Blanks.

Art Basel 2013: Your Extracurricular Guide To...