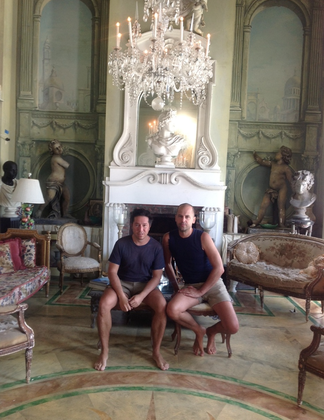 This week, we appear to be the source for all things Fire Island, so let’s keep that rolling along…The Ruffian’s Brian Wolk and Claude Morais were recently on the isle of Fire and write in with their experience staying at Cherry Grove’s famed Belvedere Hotel and (naturally!) give us a history lesson. Happy gay pride!

Cherry Grove dates its modern history to the year 1868, when Archer and Elizabeth Perkinson purchased the property for 25 cents an acre and named the land for the native black-cherry trees that grew there in abundance. Twelve years later, they opened the Perkinson Hotel, which hosted guests like the legendary Oscar Wilde. The Great Hurricane of 1938 destroyed much of the old Grove. However, the community rebuilt and a new generation of visitors followed, including Greta Garbo, Xavier Cugat, and, most notoriously ,Christopher Isherwood and W.H. Auden, who arrived on the island dressed as Dionysus and Ganymede carried aloft on a gilded litter by a group of singing carriers. Not much has changed in the ensuing years; dancing and gilding the lily are still the most popular past times of the charming, rambunctious bunch that inhabit this carefree community.

Cherry Grove is experiencing a renaissance, and nothing says renaissance more than a Venetian-inspired Palazzo. The Belvedere Guest House’s commanding presence beckoned us as we crossed by ferry from the mainland on the Fire Island Empress. Majestically perched on the Long Island Sound, this stately institution was erected in 1956 and was intended to be a private home.  That same year, a fire razed the only hotel in Cherry Grove and sparked the entrepreneurial instincts of Belvedere’s founder John Eberhardt, who expanded his home by adding six additional guest rooms. Mr. Eberhardt’s training as a set designer is clearly evident in the extraordinary and fanciful design of this landmark property.   The Belvedere Guesthouse is one man’s architectural fantasy.  Its clever decoration by means of theatrical set pieces, antiques, and hand painted trompe l’oeil frescos transports guests from Victorian England to Ancient Rome.

The property’s rich history goes far beyond the elaborately decorated rooms, galleries, antechambers and celestial observatories. The Belvedere is the first all-gay hotel in The United States.  We were lucky enough to meet the heir and owner of the hotel, Craig Eberhardt, who has been carrying the torch in bringing the hotel into the 21st century while maintaining its heritage and provenance. Hurricane Sandy nearly destroyed some of the Hotel’s most precious salons, finest rooms, and prized artwork, but he and his partner Julian’s tireless work over the winter made the Belvedere rise like a phoenix once again.

Checking into the hotel is like having a passport into a bygone era. The clientele is as democratic as the community itself, ranging from theatre types to European tourists, and most recently an influx of young Williamsburg bohemians. Its central location allows you to stroll from the bay to the beach in second. One can also head to town for a drink or bite at one of Cherry Grove’s charming restaurants or bars. On our second afternoon, we decided to take a detour and head west to the historic district of town. The perfectly intact original sailor cottages and charming A-frames are a testament to the preservation of this nearly century-old community. The gardens, the colors, and the smell of barbeques evoke Americana at its most pure. After a dinner at our favorite pizza joint, we headed back to our suite, poured some rosé, and watched the sunset from our private terrace. As a couple of swans paddled by, as if on cue, we realized how lucky we were to be in this magical place. Echoes of Hollywood and the Great White Way still reverberated in the props that filled our room.  That night we strolled through the formal gardens of the property, swam in the pool surrounded by Greco-Roman busts, soaked in the hot tub, and headed to the observatory to gaze at the stars.  The Belvedere is not only a place that was inspired by fantasy, but also a place that inspires fantasy in its lucky guests.

We Sent a Fashion Illustrator to Fire...