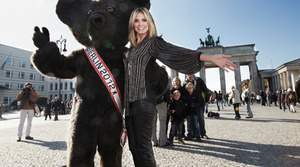 She may call America home, but Bergisch Gladbach’s own Heidi Klum hasn’t abandoned her roots. The Daily Berlin caught up with the Class-A German export to set the record straight about lazy models, her shocking new fragrance, and her lucky bag of baby teeth. Seriously.

What are your goals for 2013?
My New Year’s resolution is to eat healthier—less meat and more fruits and vegetables. We try to eat healthy already but I want us to be even better. It’s the key to so many things. I also want to live life in a more meaningful way and stop to enjoy the special moments with my children.

You’re about to start filming another season of Germany’s Next Top Model. Does it ever get old?
Never! It’s really close to my heart because I was one of these girls a long time ago. They’re not actresses, they’re real people, and they make the show. It’s my job to find out if they have what it takes. Many reality shows have come and gone, but I think we’ve been able to go the distance because our show is and always has been about the designer’s skills rather than their personalities. They can be shy, funny, loud, humble—it doesn’t matter. All that matters is the outfit they send out on that week’s runway.

Has it taught you anything about the younger generation?
Yes, that there are only a handful of girls that work really hard and see this as a real opportunity. They use the show as a bouncing board to get catapulted into the fashion world. They exercise, eat right, and are free in front of the camera. They’re polite but still interesting. But a lot of the girls I meet get so much from their parents they have a hard time doing things for themselves, like cooking, cleaning and all the other things you need to know how to do if you live by yourself. Modeling is a job and I see that a lot of the girls don’t realize that it’s work. They’re used to watching the show from their couch at home.

Ever consider moving back to Germany?
I love Germany but I’ve built a life with my children in America.  They go to school and have friends in Los Angeles so I wouldn’t want to take them away from their lives. We have a beautiful nest that would be hard for us to leave.

What food do you miss?
Our sausages are really good and I love knoedel.  I do cook quite a bit so I do make some dishes that I grew up with, like Sauerkraut soup, Schnitzel, and Karoffelsalat.

You’ve been on quite a few covers. Favorite so far?
The Sports Illustrated Swimsuit Cover was amazing because it was such a turning point in my career and it is so iconic. I’ve had so many covers over the years—Cosmopolitan, Glamour, InStyle, GQ.  But my French and German Vogue covers were very special to me at the time. I was always told by my modeling agency that I would never make it on these kinds of magazine covers because I’m too commercial. So when I got those covers, I was sort of like, Ha! I did it! Even though no one believed in me.

You’re launching a new fragrance called Surprise! Do you like being surprised?
I do love being surprised. I have received great surprise presents in the past and even been whisked off to a holiday without knowing about it.

What question do you get asked most often from journalists?
I don’t like to fly and I mentioned once in an old interview that I carried a pouch of my baby teeth with me when I would fly for good luck. I am often asked about those teeth and if I still carry them. For the record, I don’t anymore.

Do you speak to your kids in German or English?
I speak to them in both languages and would love for them to be fluent in both.

Of all the wild outfits that you’ve seen on the show, what has been the most memorable?
I always come back to the first episode of the first season. Austin Scarlett made a dress from corn husks. It just blew me away. I saw that dress come down the runway and thought we’ve got something special going on here!

What would you like to do that you still haven’t done yet?
I would love to shoot an entire season of Project Runway on a small remote island where Tim Gunn would be in a speedo and our designers would have to do all island themed clothes and make items out of things they find on the island. Sometimes, a box of fabric could be swept onto the shore all wet from the ocean. You picking up what I’m putting down?

Lucky Breaks: Where Did the Glossy’s Staff...