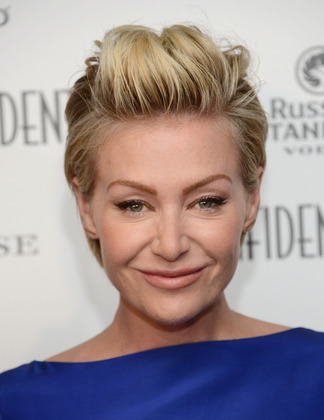 We’re inundated with pitches from publicists around the world and we love it! Sometimes our inbox is filled with such treats that we have to share the joy word for word. This little ditty came today, which is pretty much the nightmare and greatest fear of every actress in Hollywood who has had a little upgrade.

“Portia de Rossi recently revealed a newer look on the premiere of Arrested Development leaving many to wonder if she went under the knife. Our Top Facial Plastic Surgeon, Dr. Jeffrey Spiegel, out of Boston, MA, believes she has and shares his thoughts below. Please let me know if you would like to speak with him.

“I’m a big fan of Arrested Development and was certainly surprised to see how different Ms. de Rossi looked in the newest episodes. Most significantly she’s had her nose operated on. Her nose used to distinctively point downwards, but now has a perky upturned tip. Also, her hairline appears somewhat higher suggesting a brow lift. Her forehead was overly smooth and immobile suggesting poorly done botox, for while there were no wrinkles, a better injection technique could have left her with some normal motion. Also, she’s certainly had an injection into her upper lip which is fuller and into her cheeks. Finally, eyelid surgery is quite likely since she has a different shape to the lower eyelid now,” explains Dr. Jeffrey Spiegel.

From The Daily Summer: The Hamptons Teen Goes To College

Prabal Gurung Will Make The Skies A Little Prettier

A Memo To Memo Pad: Bateman Versus...