From The Daily Summer: The Hamptons Teen Goes To College 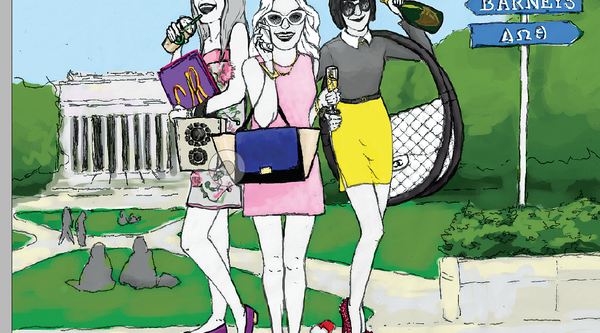 (NEW YORK) Last Memorial Day, a chic anonymous New York City teen spoke to us about her luxe adventures summering out east every year. The intrigue factor was so haute, in fact, that we just had to check in with our Hamptonette one year later. Get ready for the sauciest dish on how she spent the rest of last summer carousing around the East End—and how she adjusted to the horrors of leaving the good life behind for college.  AS TOLD TO EDDIE ROCHE; ILLUSTRATIONS BY MAYA ILYASHOV

We haven’t spoken since last Memorial Day. How was last summer?
It was very social! It was the last time everyone was together before we went off to college. Nello’s was gone, but Nammos was the new hot spot. I was always running into people I knew from high school there and it was basically the same scene. Champagne bottles popping!

Was Nammos as good as Nello’s?
The food was better. But everyone will remember their youths at Nello’s. To try to find the exact replacement is impossible, but the young and wild scene we love was still on.

Did the Hamptons teens grow up last year?
I don’t think so. We’re all stuck in our childish ways. Now that we’re in college, we’re kind of doing the same thing regardless of if we’re in Michigan or if we stayed in New York. We’re still finding ways to spend the money, go to clubs, and get VIP treatment. We’re probably wilder because we’re totally free from our parents!

Let’s talk nips and tucks! Do you know girls your age that’ve had procedures?
Nose jobs are huge. Everyone wants that perfect nose! And lots of people talk about boob reduction. I guess they can’t fit into their bikinis. The moms want bigger boobs, while all the young girls want to go down a size or two.

When do you think the Botox treatments will start happening?
How old is Kim Kardashian? She just turned 30 and she started [Botoxing] a couple years ago. Everyone follows in the footsteps of their parents. There will be girls who won’t do it at all and then there will be the ones that start around 25. God forbid they see a hint of movement cropping up on their foreheads…

The horror! What was the biggest purchase you made last summer?
Céline bags. I think that was the “it” thing. Everyone started wearing them. It’s really obnoxious when everyone’s walking around Southampton with these overly dressy totes and head wraps. Everyone should tone it down at the beach this summer!

Where would you never be caught dead in the Hamptons?
Probably any guy’s mansion without parents around. Even if I know the guy.

Why?
Guys are aggressive! In New York, you’re not isolated. You can always call down to the doorman—or scream for help and hope a neighbor hears you. In the Hamptons, only the deer outside will come to your rescue.

Do teens in your crowd ever get pregnant?
Yes. There are lots of abortions. It’s very sad.

What kinds of condoms do Hamptons teens use?
Trojan. Only the finest.

What size do they buy?
I don’t know. I’m not experienced in that department.

Do any of the girls who get pregnant keep the baby?
No way. That would be socially crazy for their families! Getting pregnant by accident is appalling. Keeping the baby would be more embarrassing for the parents…It looks so irresponsible.

Duly noted! So, what do your college pals think of your Hamptons history?
Based on first impressions, they probably thought I was a spoiled rich kid. Once they got to know me, they realized that where you come from doesn’t define who you are. But there’s definitely a curiosity. They always want to know what the Hamptons are really like!

What do you say?
That it’s really how you want it to be. When you go to the Hamptons, you can make it your own. You can have a wild night in Montauk or a calm barbecue at home with your family.

Do you tell them about the rollicking party scene out there?
No. I’m embarrassed because this is five percent or less of the world. It’s this small group of kids who are spending their parents’ money and going wild in small towns on Long Island. It looks gross!

Where do your college friends summer?
A lot of people go to Martha’s Vineyard. I’ve been there before and I did not like it. It’s like a wannabe Hamptons. They also go to the [Jersey] Shore, which I think is really weird. I don’t know if Nantucket is cheesy, but it’s definitely a different crowd than the Hamptons. Some are backpacking around Europe, and some people just don’t go anywhere. That’s really sad.

How did you deal without having a nanny in college?
I hired a housekeeper to come every week.

To clean your dorm room?!
Yes. My suite-mates are disgusting. Some girls got sick from the dorms and had to move to different places. I shared a bathroom with three other people; it was dusty! I have my broom, but I’m not Ms. Windex.

Does she do your laundry, too?
I have a laundry service. Everything is very cheap. It’s so much cheaper to go to school anywhere other than New York City. I’m saving so much money living outside of New York! But I don’t do my own laundry. I don’t know how.

What did your nanny do when you went away?
She cried. I cried too. I miss her so much. She took care of my siblings, but apparently it was very quiet in my home. There was less laundry and less screaming.

Is she on retainer to be your nanny for life?
I always tell her that when I have kids, she better not retire because she’s going to have to come work for me.

Do you have an allowance?
I have a credit card.

What’s the allowance of a Hamptons’ teen?
From what I hear, about $5,000 a month on average.

Where does all that money go?
If they’re going to urban schools where there’s an Intermix or Barneys, then clothes. The guys spend it on drugs. If you’re me—and I don’t have that $5,000 a month thing—I spend money on the housekeeper and going out for good meals.

What are college parties like compared to Hamptons bashes?
It’s very fratty here. In the Hamptons, there’s lots of room and luxurious basements to party in. But in college, we’re all basically pushed into a fraternity house. No champagne or vodka on the rocks! It’s definitely just Bud Light from the convenience store.

Do you miss sipping champagne?
I never really drank champagne, but I miss the pretty glasses that everyone would hold! Now we have these horrible red cups. There’s also no hors d’oeuvres, no food for nibbling on, none of that. You’re lucky if you can find old candy sitting around.

What do your college pals think of your Céline and Chloé collections?
It was more about the high heel thing. A lot of them look at high heels as a shoe to wear only when you go out for special occasions. In New York, it’s our everyday shoe. People looked at me like I was Lady Gaga at the beginning.

What’s the style quotient on the campus quad?
I’m impressed with the guys, even though they’re super preppy. They wear a lot of Vineyard Vines clothing. There are lots of leggings, fur vests, Lululemon, and tight dresses. For girls, there’s a lot of sorority gear. At night, when people are going out, its all about Chanel bags and red soles.

Christian Louboutin in college?!
I’ve never seen more Louboutin. I’m so jealous because some of these bitches get walk-in closets and I literally have a hole in the wall.

Sorry about that! What did you miss about New York while you were away?
Everything. I felt more like a child in college than I did in New York, actually. I had freedom in New York. I could go wherever I wanted. There are just so many options; there are thousands of restaurants, for example! In college, you’re limited to only a few. It sounds really cliché, but New York is so magical. I’ve never been more appreciative of where I’m from.