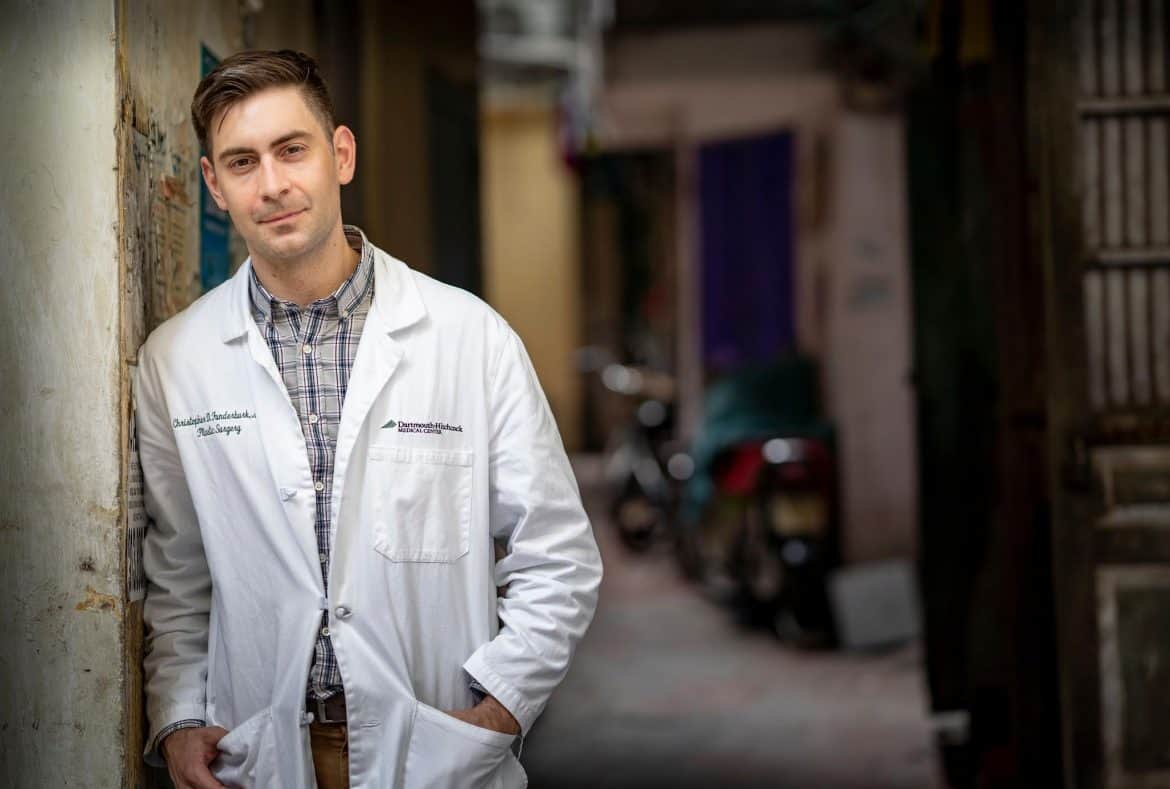 Dr. Chris Funderburk has found his niche as the go-to plastic surgeon for men in New York City. This well-educated and likable Southern gent tells The Daily what guys are coming in for these days and how a younger generation have become his most ardent patients.

Tell us about your background.
I grew up in a small town in Alabama, in a mill town. I went to high school there and graduated in a class of 90 students. It was super small. My parents worked multiple jobs to make ends meet and I grew up without much money. It was expected that I would start working as soon as possible. One of my uncles had a landscape team so I started working at 10-years-old. I would also work at my grandfather’s store where I would run the cash register and stock shelves. I worked all through high school and college. I went to college at the University of Alabama where I was a biology and chemistry major. I finished and thought I wanted to run a lab doing research. I then did a master’s program at Alabama and one year into it I was miserable because I wanted more human contact. I went to a conference in Amsterdam and met a doctor who practiced in Egypt and I told her about my situation and she thought I would do better in medical school, so I ended up going to Emory University for medical school.

How did you zone in on plastic surgery?
I liked the idea of plastic surgery, so I did several rotations including one at NYU. This was around 2008 and my son was born then. I was separated from my wife at the time. That’s the same year that I came out and met Jeff [Meletio], who is now my husband. 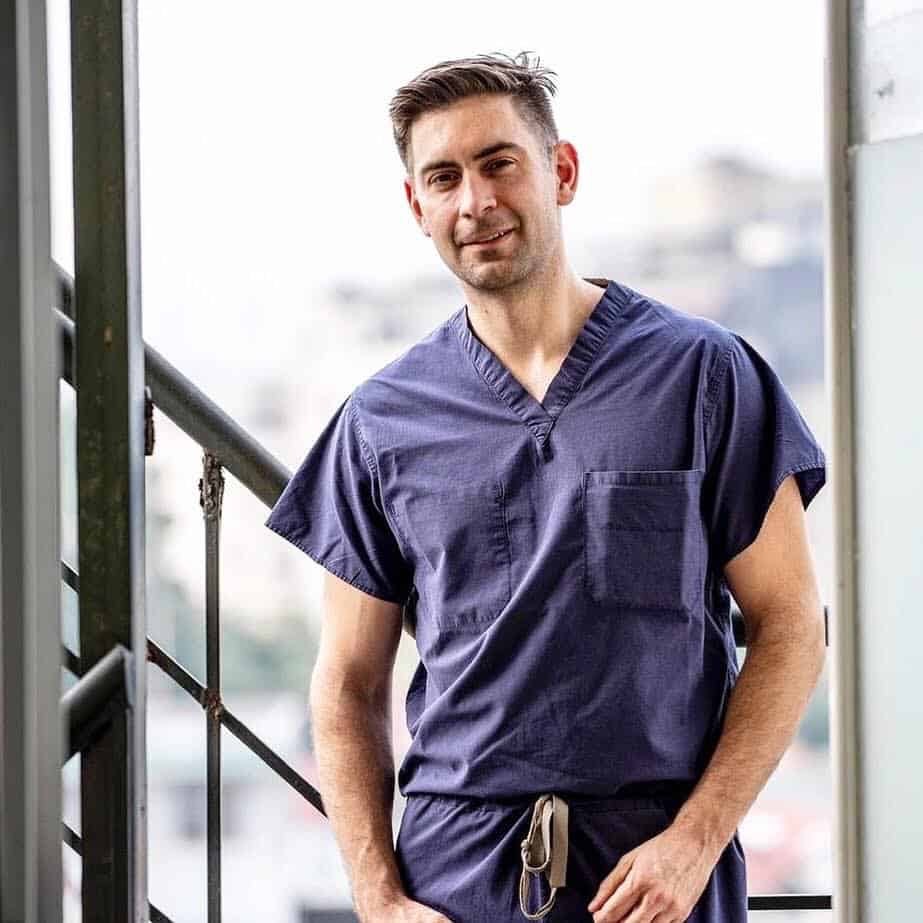 What a year!
I know! My son was born and I needed to stay in Atlanta, so I did general surgery there. Then I went to Dartmouth for a plastic surgery residency. While I was there, I applied for a fellowship in Manhattan at Manhattan Eye, Ear & Throat Hospital. I got it and moved to New York to do that fellowship for a year. I started coming to work with Dr. Ryan Neinstein because he was doing minimally invasive bodywork, which is what I wanted to do. He liked working with me. Everyone who was coming to the office was very young. They all want small hidden incisions. They don’t want people to see that they’ve had plastic surgery.  These are people who go to the gym and have healthy diets, but they have love handles that they can’t get rid of. We target those little areas and are good to go. It’s very little down time. A day or so.

What was it about plastic surgery that appealed to you?
Growing up in high school and college I was into music and in a band. I was tied in with the art crowd. I always enjoyed working with my hands playing guitar. I loved building things with my grandfather. As a gay male, I feel like cosmetic surgery was a great match for me.

How did you and Dr. Neinstein start working together?
Ryan somehow already had a practice that was 30% male patients, which is unheard of! He had that patient base and it was expanding. There’s not that many doctors in New York who specialize in male plastic surgery. He knew my story and knew I was interested in male surgery. He said he has this huge base and we could market me as the male plastic surgeon. Every week I’ve done multiple males doing abs, torso, shaping, body contouring, we’ve done male butt lifts—what we call a power muscle enhancement. We’re trying to do everything all natural without implants.

What’s the difference in the way a man approaches plastic surgery compared to a woman?
It has really changed in the last 10 years. The idea back then was that if you are a male patient, you don’t want to be seen coming in the front door. Sometimes they would ask for off hour times to come in. That’s all completely changed now. Men frequent this office and our other office all the time. Some of the stigma has gone away; especially with the younger crowd and that’s who we appeal to. The guys are in their 20s and 30s.

What does a guy in his 20s want done?
Injectables, those guys usually want to build up their jaw if they have weak chins. Occasionally they’ll ask for a chin implant. Some in their 20s also want preventive Botox. The idea is that you start your Botox then and shrink the muscles that later with contraction would lead to wrinkles. Emsculpt is also popular with the guys. Surgically, younger guys want a lean athletic look with liposuction and then there are others who want fat to be grafted to other areas. Maybe a bigger chest without implants, or some might have a flat butt and they want some fat added there to get more projection. The male butt lift is traditionally to put implants in but we feel that’s problematic because you are dealing with problems related to implants. By putting your natural fat above the muscle, you can get that nice projection and muscular enhancement without the downside of the implants.

What do guys come in for the most?
It depends on their age. Botox is a good starter cosmetic procedure in general. Guys will start to notice the lines between the eyebrows. That’s usually one of the first things they come for, and their forehead. Pretty much all of our surgical patients will explore some non-surgical procedure first. It’s usually Botox and sometimes fillers. Sometimes it will be laser hair rejuvenation.

What are your favorite procedures to do?
The male body contouring. I love it. If you have a patient who spends time in the gym and despite their efforts has a little fat, you take that out and bring down their love handles. The difference is really dramatic.

What’s the recovery?
Very minimal. A traditional tummy tuck could be four months minimum before you can lift something heavy. With this, people are back to work the same week. There’s a tiny bit of bruising and they are back in the gym in two weeks.

Do you do cool scuplting?
We don’t. We’ve seen a number of problems with it. They had amazing marketing. The problem is the application of the cooling treatment can actually make the fat grow. They call it paradoxical adipose hyperplasia.

When do people see a change in their face after getting botox and fillers?
There’s a common misconception about botox. We’ll have people come in two days before their wedding and they ask for Botox to get rid of their wrinkles for two days later. It doesn’t work that way. It usually takes 5-7 days on average before they see an effect. Some it takes as long as two weeks for Botox. Fillers you see the effect right way.

How long do fillers last?
Six to eight months on average. It depends on the location and the type of filler you use. If it’s a little overkill, you see it go down in time. We have had patients come in who have had too much done by an injector and we can dissolve them chemically.

How are you making patients feel safe to come during COVID?
I had COVID myself back in March. It was a terrible experience. I lost 20 pounds, all muscle mass. I felt terrible, so I take it very seriously. The state has put very strict restrictions on any cosmetic surgery, any elective surgery for that matter. We had complete lockdown and were unable to perform anything from mid-March until June 1st. For the cosmetic surgery, we had to have very strict precautions in place. All patients had to be tested for active COVID infection. We still do that. We are doing them here a few days before the surgery; they have to get the nasal swab. In our waiting rooms, we limit the number of people allowed. It’s usually just one family member. All appointments for injections have to be by appointment. Everyone in the office is in masks. We have sanitizer everywhere. There’s a long list of regulations we adhere to.

What eventually landed you in New York?
There wasn’t much to do at Dartmouth, but there was a bus that would bring me to New York on the weekends with my partner. We had a lot of friends here already. We love it. We would go to plays and I love going to concerts. I got offered the interview for the fellowship and thought it would be the dream position. We wanted somewhere with culture and gays! We were thrilled when we got the chance to be here. It was a dream come true.

Do you love what you do?
I love it. It’s great. During fellowship we were able to start operating independently and it was so exciting. You get to take a patient through it. You build a relationship with them and make a huge difference in their lives. The nice thing with plastic surgery is you do an operation and over the next few weeks they keep looking better and better. They are very happy patients.

ÀCHEVAL SS ’21 Collection Is The Escapism We Need

Great article. He sounds like a good guy and a great surgeon. What a combo! I live in NYC and will definitely check him out.

Very informative. I’ve thought about getting lipo before, but now I may seriously consider it. Thx.

Dr. Chris did my body sculpting surgery! Could not be more pleased with him or the outcome. I would highly recommend for any man who has let the pounds pile up haha

Sounds like a brilliant guy who comes from a
humble background and has worked really hard to get where he is today. We need more stories about people like this. I bet he’s already paid $750 in income taxes. Just saying!

Speaking from someone that has known Chris since childhood, I can personally attest that he truly is the real deal! He forgot to mention that he was the absolute smartest and kindest student in the entire school! I’ve always been so extremely proud of the man you have become. Keep up the good work buddy!!