An Evening To Get (So) Excited About 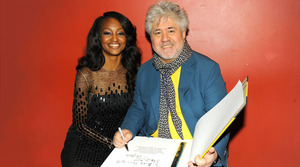 (NEW YORK) Looking for an equally salacious and hilarious way to spend an hour and a half? Pedro Almodovar is your man, and his latest flick, I’m So Excited! (yes, that was an intentional exclamation point, not just Daily-ese), is your must-see. The Cinema Society hosted a screening of the riotous yet politically mulling film, along with Girard-Perregaux and DeLeón, at Landmark Sunshine Cinemas. The film’s castmates Blanca Suarez, Miguel Angel Silvestre and Carlos Areces were on hand, though, alas, Penelope Cruz and Antonio Banderas, whose cameos take up all of two or so minutes at the very beginning of the movie, did not make it. No worries! According to Almodovar, Suarez is the next Cruz. Duly noted.

Though the film was fantastic, exuberant in and of itseld, Almodovar’s remarks pre-screening were excitement-worthy enough. The director commented on Americans’ passion for air conditioning, shed light on the meaning of “Excited” in the film’s title (“being horny!” he explained), and dedicated the movie to bisexuals and virgins (both of which are persona-defining factors of his kooky cast of characters). Almodovar also asked for a hands-raised tally of any virgins or bisexuals in the theater. A reticient single hand shot up for the former. Amodovar’s response? “What a pity! You deserve it. You gotta quit that [relationship] situation.” Frankly speaking indeed!

The festivites then migrated northwest, rain be damned, to No. 8 for some afterparty revelry, heavy on the tequila and (thus?) the excitement quotient.
ALEXANDRA ILYASHOV

Toasting The Premiere Of ‘The Rewrite’ With...