Learning 'What Maisie Knew' With Julianne Moore (And More!) 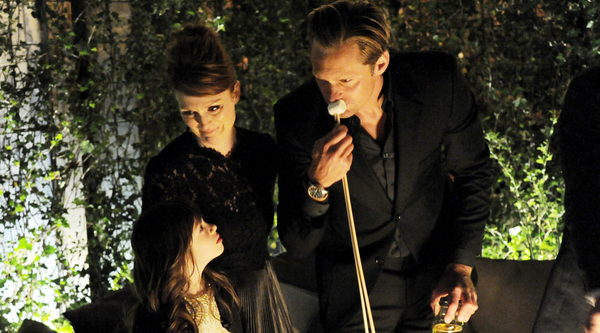 (NEW YORK) Need a reminder to appreciate your parents? Go see What Maisie Knew, a filmic adaptation of the Henry James novel penned in the 1890s out in NYC theaters today, which was shown at a Cinema Society, Tod’s, and GQ screening at Landmark Sunshine Cinemas last night. Set in privileged, loft-laden environs in downtown Manhattan, the flick, directed by David Siegel and Scott McGehee, depicts a pretty awful (read: self-absorbed, manipulative, and entirely inconsistent) set of ‘rents, played by has-been rocker Julianne Moore and art dealer Steve Coogan. More specifically, the bitter, fight-fueled disintegration of their unmarried family situation, as understood through the eyes of their adorable daughter, Maisie (the very talented Onata Aprile). Luckily, a set of secondary significant others (played by Alexander Skarsgard and gorge Scottish newbie, Joanna Vanderham) come to the rescue.

Besides what Maisie knows (and, more often than not, doesn’t know), wondering what Moore wishes she knew more about? “The future!” Ditto, darling. On the topic of childrearing, Skarsgard reminisced about growing up with party-hearty parents and falling asleep to the sound of them laughing and having fun. Sounds like a sweet alternative to more traditional bedtime stories…

After the crowd got their deftly done melodrama on for an hour and a half (including Girls’ Zosia Mamet, mod duo and moviegoing buds Erin Heatherton and Caroline Winberg) on the LES, they regrouped on the outskirts of Chelsea for some alfresco mingling (rooftop weather, at long, long last!) at Gallow Green, the romantically landscaped bar digs atop the McKittrick Hotel. Allison Mosshart from The Kills took on DJ duty, quite befittingly, considering two of the band’s songs are featured in the movie’s soundtrack (j’adoring Moore’s cameo on “Night Train.”), while the likes of Hamish Bowles, Penn Badgley, Jessica Stam, Fern Mallis, and more moseyed around, some sampling Qui tequila-addled margaritas and a hibiscus concoction, and hitting up the s’mores station in the northeast corner of the rooftop (pictured in the above shot). Which leaves us with one lingering quandary: shouldn’t adults doing s’mores be a more regularly-scheduled nightcap?
ALEXANDRA ILYASHOV

John Hardy Celebrates Its “Made for Legends”...