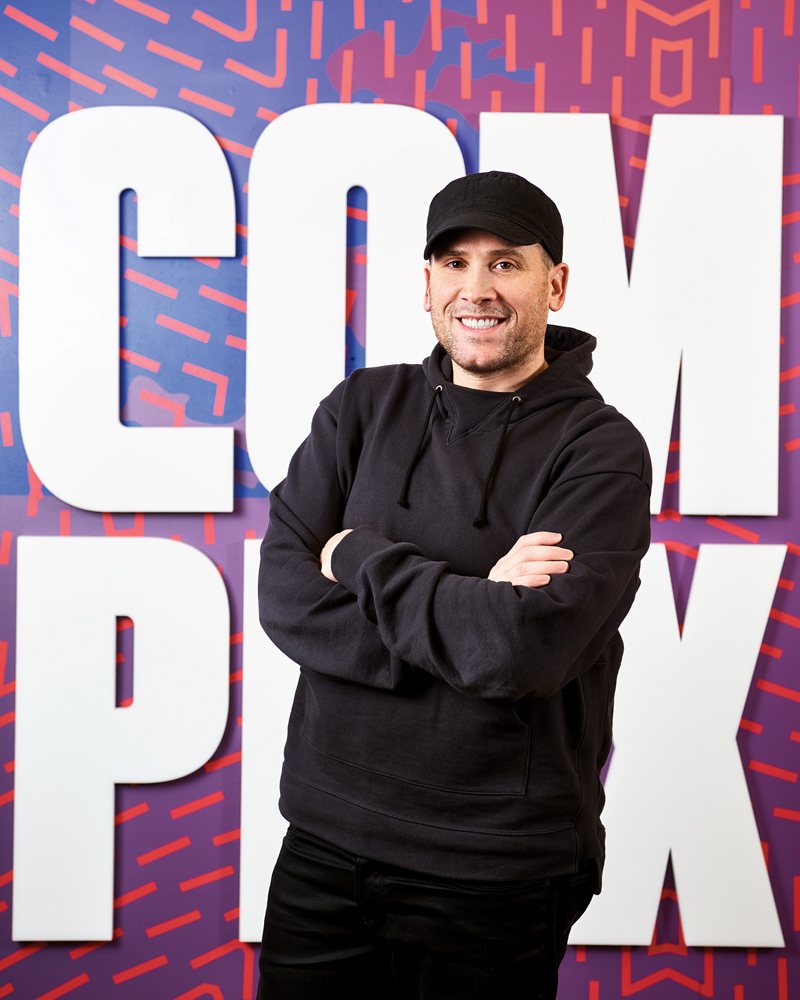 Marc Ecko Dishes on Complex, Then and Now

In a classic modern-day-media deal, Hearst and Verizon scooped up street culture fave Complex in 2016. Just a year later, it folded print ops, heralding a new day at the entertainment group. Marc Ecko, the original visionaire, sounds off on life after acquisition.

How did the talks with Hearst and Verizon come about, and what were they like?
We were in an investment cycle [for Ecko Unlimited], and we became friendly with the folks at Hearst. We got to meet Neeraj [Khemlani, president and group head of Hearst Entertainment & Syndication] and became fast friends. We got to know Steve [R. Swartz], the CEO and president. They saw us as entrepreneurs, asymmetric from a typical media entity. We’ve always believed in distributed media—we were early adopters of that—and I think they liked our chops. They came to us for our intellectual property, our creative and executive leadership, and our skill set. In the bouquet of holdings that they have, we are an interesting play. They can’t produce what we’re doing from scratch, and they depend on us to figure this thing out. We thought, let’s help fine-tune some of the brands that they were trying to launch and better arm the brands that we have. Complex was never the big media darling in the way of anyone who is touching the hot button of digital media—the BuzzFeeds or the Voxs or Vices of the world. But I can tell you this: We’ve always had a great P&L, and we know how to run a great business. We built a differentiated brand that no one else has been able to replicate.

Had you considered merging with a large corporation before?
There was momentum in the marketplace around consolidation, and we were trying to be good observers of that. The disintermediation of traditional cable TV by the Netflixes of the world and all these other paradigms shifts—we were very aware of that. We knew that, like any great tectonic shift, there’s the right side of the earth to be on and there’s the wrong side. In the distributed media landscape and how things are going to realign, this partnership made a lot of sense. Frankly, they are a lot more progressive than people will give them credit for. They, as the parents, really give us room and give life to this endeavor. It’s a new day for us at Complex.

What does that look like?
About three years ago, we started an initiative that we called Project Panda. It was sort of a send-up from Anchorman. This was our first endeavor into operating a news and video production service. We made that happen with very few resources, and it grew very fast. We have aspirations for a whole host of things, like scripted, animation, mumblecore, all different forms of comedies. This joint venture with Hearst and Verizon has us basically overnight in those businesses. We just did a show called Embeds, which is one of our first scripted shows; Megyn Kelly was a producer. Suddenly, we’re developing scripted series, and that puts us in the licensing business. It really expedited our resources. So expect to see a lot more of that. Within a couple of years, we’re hoping to put out 300 hours [of video content a year], which is conceivably enough for a cable channel or two. That’s how we’re thinking about it. We have the ability to really disrupt things.

What were your stipulations going into the deal?
The stipulation for me was creative agency. It’s that sense of creative fulfillment. But I’m a big kid—I’ve got a lot of gray hair, despite the $9 hair dye—and I know that it’s being creatively fulfilled on one hand, but also being a responsible operator on the other.

Does it bother you when Complex is compared to Vice?
It doesn’t. In every business that I’ve done, I’ve been in front of building marketplaces. When it was my fashion business, there was an emerging genre. The retailers, the buyers, and the manufacturers didn’t know how to deal with us. It’s the same thing now. It’s this new generation of whatever you want to call us; digital media types, kids who have sort of a punk rock or hip-hop attitude or came from some strata of the subculture, who are now growing up in media. This is what human beings do—they organize us like packaged goods, and if it helps people to understand our model by bringing up Vice, then good for us, and I guess good for Vice. But our philosophy is to meet our audience where they are, which is everywhere.
In that way, we’re a little bit more distributionally agnostic. The future is sort of a Wild West in media, so who knows where the opportunities lie.

Who do you view as your competition?
I’m not really one to give a f**k about the competition. We’re focusing on executing our job well. The greatest competition is ourselves—our pride, our hubris, our s**tty self-image, how much we believe in ourselves. When someone says “Don’t compare me to this one” or “I’m more like this one,” I’m like, just shut the f**k up—let’s just worry about being the best version of ourselves. But I’m also not going to be running around waving a flag saying, look at me!

There’s a lot of doom and gloom surrounding print media. Is that part of the reason Complex magazine folded?
Like every other good chef, you’re just as good as the last meal you served—it’s the burden of being a creator. In the year that we shut down the magazine, we also launched ComplexCon. You can’t do everything awesome—there’s just not enough time and energy. But I would never say print is dead. Divine things happen with man and words. It’s an important part of who we are. But 99 percent of our activity happened online, so we just couldn’t focus on the print piece—which was not losing money, by the way. Listen, I think we’ll probably print s**t again. It’s never done. But the business mechanism will be different.

What kind of content will Complex focus on?
Many different species. Now I have to think about vertical and horizontal, about social-first, the role of talent. Not everything can be done inside the four walls of our offices, and that’s a whole new mentality. We never really had a lot of third-party operators in the way that we do now. It’s basically an ecosystem—collaborators, writers, directors, and producers. My focus is on building great IP that expresses the spirit of our brands. I don’t discriminate on the form factor. In fact, some things come from the most unconventional places.

What were some of the magazines that you read growing up?
Heavy Metal magazine, which is a great graphic novel/magazine. It was so naughty—it was on the edge. I was into GQ, jazz magazines, Airbrush Action, which they published in Lakewood, New Jersey, where I grew up. My aggregate view is broad, but my interests are niche, and I think that’s what Complex is all about—organizing those fractured conversations.

What fashion brands are you watching right now?
I love John Elliott and how he’s direct-to-consumer. A lot of people parrot what he does. I love the young, emerging, streetwear brands that are basically doing a complete reset on the classicism of fashion. The power of hip-hop culture is just unbelievable to help reshape the landscape or the notion of what luxury is. What Virgil Abloh is doing is great. What A$AP Bari did at ComplexCon, and at Art Basel with Nike. Seeing what brands like Antisocial Social Club are doing, and Supreme and Louis Vuitton. There’s a great vintage retailer for streetwear in L.A., called Round Two. They really brought tremendous energy back to all the relevant s**t from the late ’80s to the early and mid ’90s. That store has a line outside of it more than stores that have a new brand drop.

What’s your involvement in Ecko Unlimited?
The Iconix guys run it. They give me updates, but I haven’t been operationally involved in the fashion business for almost five years now.

When was the last time you were at New York Fashion Week?
Oh, goodness, a decade ago. My staff and a lot of people I work with go, and I get the reports. It’s good to see that people are stirring the pot and trying to rethink the model. I wrote about that in my book in my early years. I desperately worked to try to make it work in fashion.

Are you on social media?
Not really. I occasionally will check in. I’ve never been good at it. It’s never been who I am. I am a much more discreet and low-key person.

Now the million-dollar question: What’s your take on the future of media?
I’ve watched many different industries over the years, and just like the cells in your body, every seven years you shed them and become a different person. I think it’s totally okay that these things happen. Sometimes you bloom as a butterfly, and sometimes you don’t. For me, I practice trying to be the best version of myself. You’d be surprised how powerful that is. It sounds pokey, like some new age or spirit journey. Well, guess what—it is. When I make good stuff is when the people around me are united and focused on running our own race. Media will be fine. People have got to get s**t together and communicate. There’s no such thing as mind-reading. Maybe people should put down their f**king phones for a minute and talk…as I go and make things to distract you on your phone.

LONG BEACH, CA – NOVEMBER 06: A general view of the atmosphere at ComplexCon 2016 on November 6, 2016 in Long Beach, California. (Photo by Phillip Faraone/Getty Images)