Daniel Lismore on His Haute Couture Exhibit at Art Basel 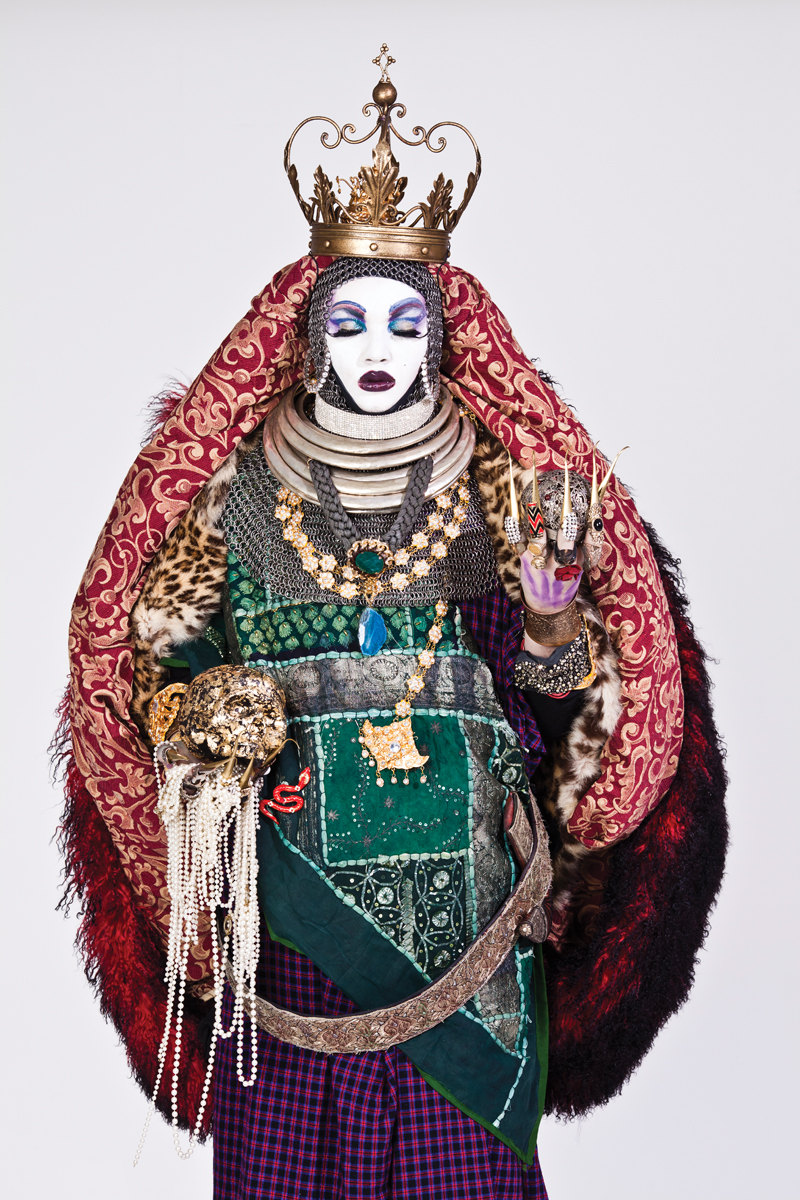 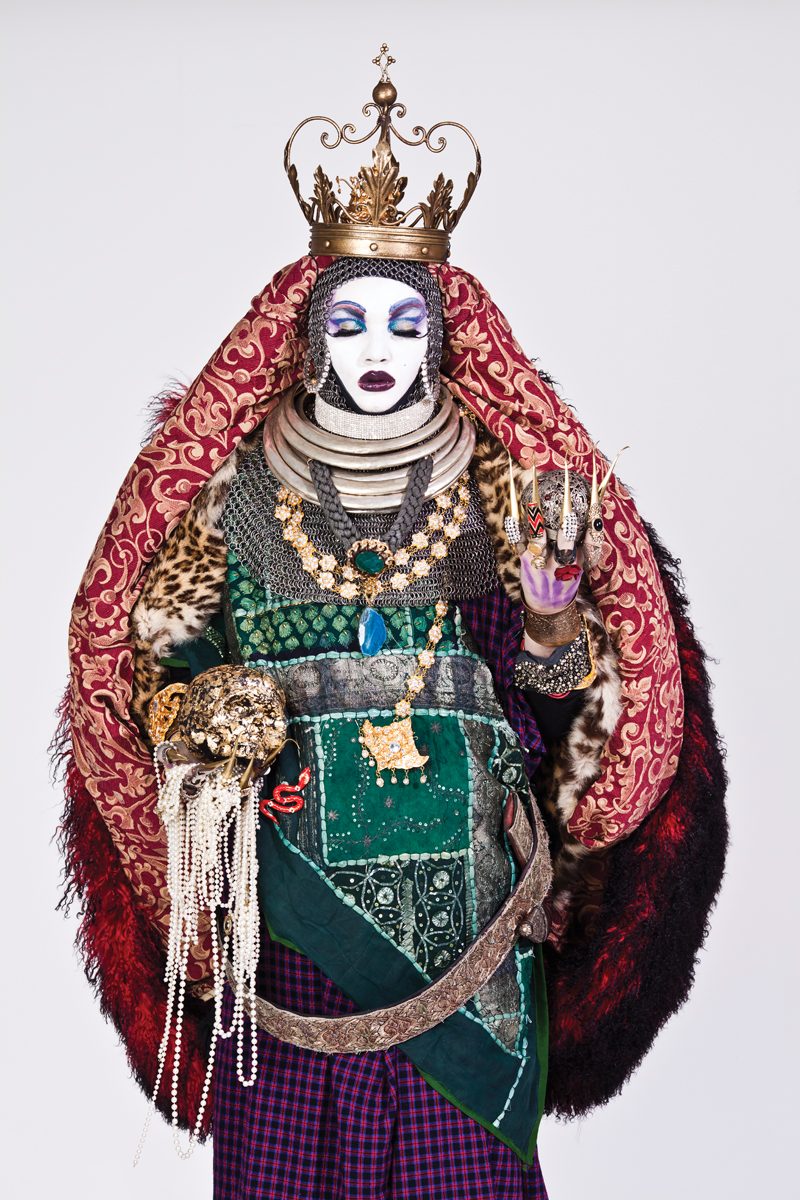 Artist, performer, activist, and all-around bon vivant Daniel Lismore is making his inaugural trip to Art Basel to reveal his ultra-rare collection of haute couture. Before the “Theater of Self” exhibition storms SoBe, we rang him up at home in London to learn more about the guy who has captivated some of the fashion world’s most discerning hearts and minds.

Why did you name the original exhibition at SCAD “Be Yourself; Everyone Else Is Already Taken”?
It’s my favorite Oscar Wilde quote. It explains the show without saying it. When you walk into the room and see the exhibition, someone who is not familiar with me might go: “Does this person actually exist?” The answer is yes! You can be whomever you want to be.

What have you included in the show?
There are 4,000 pieces that form a tapestry of my journey and travels. There’s haute couture, tribal pieces, weird objects, and things I’ve made for my own label, Sorapol. There’s a lot of Alexander McQueen, as well as some Jean Paul Gaultier and Matthew Williamson. There are also pieces that my friend Boy George has given me over the years.

What attracts you to these over-the-top looks?
They’re great armor. The world is a scary place. I like how people respond.

Where do you keep everything?
In a storage unit!

Are you well-organized?
No. I prefer not to be. Life should be spontaneous.

SCAD Atlanta – Winter 2016 – Exhibitions – “Be Yourself; Everyone Else is Already Taken” – Daniel Lismore – Behind The Scenes and Installation – SCAD Fash – Vogue Exclusive – Photography by Raftermen

You had an exhibition at SCAD earlier this year. How did that relationship begin?
I know Rafael Gomes, the museum director, and I told him that I wanted to exhibit my clothes. He mentioned that he was heading to SCAD with Vivienne Westwood and offered to talk to the team there. When he showed them some of the pieces in my collection, they loved the idea. To put the exhibition together, I worked closely with him and SCAD’s team. It’s not just a fashion story; it’s an art story.

How did you become such a fashion guy?
I’m from a small village in the middle of England. I studied photography and art and fashion. I was thrown into the fashion world full-throttle when I started modeling many years ago. I was working with all these greats in the industry, and then I got lost in nightlife for a few years, where I got to know everybody. I learned a lot from Nicola Formichetti, who would style me to go out to the clubs on the weekend. I also worked with Isabella Blow. Listening to her talk about clothes formed this idea in my head: I had to go out there and be my own entity. That’s how I discovered myself, really—through others.

What was Isabella like?
She was one of the most beautiful people I’ve ever met. She was an original. She was like a beautiful thunderstorm, and when the lightning struck, it was glorious. She was a ray of energy. She taught me so much. She taught me confidence. She didn’t like the way she looked and wasn’t happy with herself, but she was a walking work of art. Her style blew your mind. I had never seen anything like that before. She taught me not to give a damn about what people thought of me.

Are you still involved with the nightlife scene in London?
I don’t go to nightclubs as much anymore; I’d rather go to an event. There are few pockets of culture left. The [recent] closing down of so many venues in London is really affecting the creativity. London’s at a really strange place in time: It’s so expensive to live here, so many artists are now living outside of the city.

What’s your upcoming book about?
It’s an in-depth look at the exhibition. Hilary Alexander and Paula Wallace wrote most of the text, and there are quotes from Edward Enninful, Vivienne Westwood, Matt Lucas, Debbie Harry, Boy George, Stefano Pilati, and Stephen Fry.

Who’s your spirit animal?
It changes all the time, but right now, it’s Daphne Guinness or Björk. I admire their artistry, and they are beautiful people, inside and out. One of the reasons I do what I do is that I’m trying to change perceptions. I’m an activist at heart. One of the greatest things about being me is being able to change things politically. People do listen. I don’t know why, because I’m not an expert, but I believe in just causes, whether it’s fracking or WikiLeaks or LGBT rights.

Thoughts on WikiLeaks?
I’m so for it. I know Julian [Assange], and he’s a wonderful person. He’s actually showing the people what’s really going on. Governments don’t like it, and they treated him diabolically. I think he’s one of the great people of our time. People say he’s doing it for many reasons, but he’s actually doing it for the greater good of humanity. Understanding that is why I support him.

How did you meet him?
London is the hub of the world! Everyone turns up here. [Laughs] One of the ways I met him was through Vivienne Westwood—I work with her on the Climate Revolution project.

Who are your favorite artists?
It’s so cliché: Warhol, Picasso, Dalí, and David LaChapelle. They’re always in my mind somewhere; their work is always haunting me. David became a friend, and he’s such a beautiful man. His life is like his work—there’s never a dull moment.

If you could live in any other period of time, which would it be?
The Pre-Raphaelite era. I love the paintings from that time, as well as their ideas about beauty. And I would have loved to have lived in Marie Antoinette’s court.

You’ve been compared to Leigh Bowery.
I didn’t know who Leigh Bowery was for a very long time. I ended up at a friend’s house once, and he gave me Paris Is Burning and a Leigh Bowery documentary to watch. I was like, “Oh, my God! This is crazy. I do this, too. Why didn’t I know this character?” Later on, Boy George asked me to play Leigh in the musical Taboo. I studied the role, so now, I know so much about him. I met everyone he’s been around and interviewed them. He was a genius, but Klaus Nomi from that period was the one for me.

You recently appeared in the Ab Fab movie. Jealous!
I was in two scenes and had a few lines. I was thrilled. It was a lifelong ambition to be in it. It’s my bible! The premiere was like Ab Fab come to life. It was a real moment—the weirdest mix of people, but so brilliant.

Finally, congrats on being named among Out’s most compelling people of 2016!
It’s a bit surreal. What have I done?

A Day at the Whitney with Hudson and Jameson Kroenig

Bjork is a mediocre pop-clown–but worse, she advocates for cruelty to animals. Recently she admits to liking best-i-ality. The depraved abuse of innocent animals who have no voice is condemnable. There is nothing “beautiful” about an animal-rapist, inside or out. Bjork is disgusting. One wonders what Daniel Lismore would say had Donald Trump (who I oppose & dislike–I voted for Bernie Sanders) had said he “liked” best-i-ality–i.e. the mind reels. Show-biz hacks & fashionists are hypocritical in the extreme for pretending to be avant-garde, but in fact, are superficial, out to enrich themselves irrespective of who is hurt. Daniel Lismore might want to inform himself: there are more substantive, profound concerns in life including the protection of children and creatures who depend upon us to defend their rights.

Edie. I’v chosen my battles with the world. I can’t fight them all. You keep working on yours, I hope you work hard and raise some money and give time for your causes✌️️Peace. PS I think Bjork was taking the biscuit about beastiality. Sad you are clownphobic by the way. They are mostly beautiful creatures. 🖖🏽