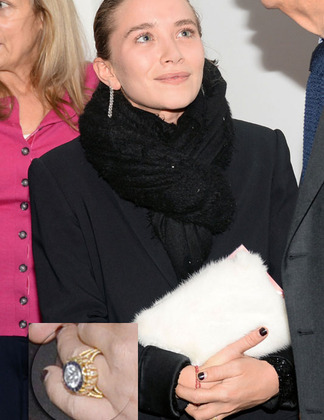 The ring that everybody’s talking about was out and about last night on the hand of Mary-Kate Olsen, who is rumored to be engaged to beau Olivier Sarkozy. The two were spotted at a book party at DvF’s downtown studio to celebrate Bob Colacello’s Holy Terror: Andy Warhol Close Up, the reissue of the juicy biography on Warhol first published in 1990. Last week it was reported that the vintage Cartier ring from Sotheby’s is worth a mere $81,250, aka the price of a t-shirt from The Row. We kid!

Lara Stone Is Fabulous At Every Age for Harper's Bazaar