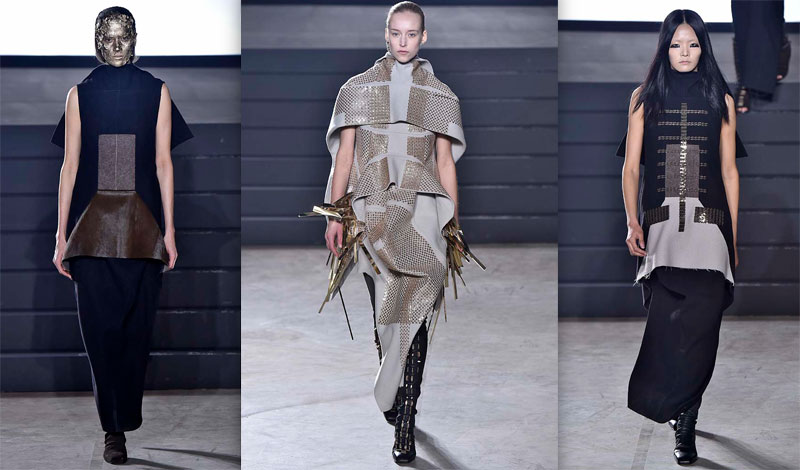 Rick Owens, in true Rick Owens form, turned completely on his heels for his women’s show by toning things down with a more “safe for work” showing for the femmes, following his very revealing men’s collection. “If the men’s Fall Sphinx collection was about anarchy and Arcadia, the women’s Fall collection shares the same name and same mood with more arcadia and less anarchy,” said Owens in a press statement post-show. Arcadia represented harmonious wilderness in the European Renaissance arts era.

Owens’ women, however, still had a bit of a fierce warrior aura, albeit with a much more subtle touch, this season. Some even wore gold or silver face paint that looked like it had flecks of shrapnel-like foil mixed in. Owens was influenced by Frank Lloyd Wright’s Hollyhock house in L.A., which recently reopened to the public. The Mayan influences in Lloyd’s design inspired the angular lines and blossom motifs abstracted into geometric diagrams. Owens apparently has Mayan heritage on his mother’s side. The mix of draping, hints of fur, metallic fringe, and sequined embellishments might sound like they belong on a gaudier runway, but Rick Owens’ cult followers will love this collection.