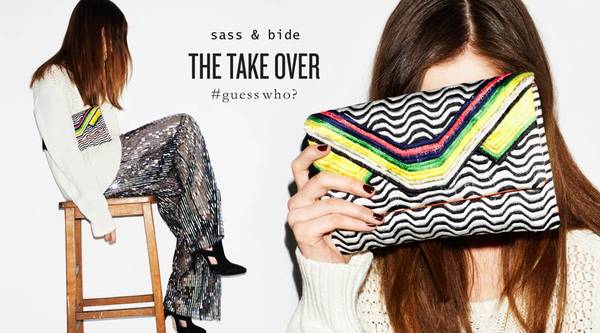 This mystery mod is not only the face of Sass & Bide’s Spring campaign—shot by Angelo Pennetta and styled by Victoria Young—but she’ll also be taking over the brand’s social media channels for five whole days next week, beginning January 28th. During her techie reign, expect a sneak peek into her super secret daily activities and musings, plus snapshots of her wardrobe on the brand’s Twitter, Facebook, Instagram, Tumblr, and Pinterest. Pourquoi? To fete Sass & Bide’s newly designed e-boutique and Tumblr blog, natch. Sass & Bide leaked a couple Spring pics to us early to get you started on your guessing game before the official reveal on Thursday here and on the-takeover.sassandbide.com. Let the games begin!

Clue  numero un: She aspired to study law before she was discovered. (Discuss below, darlings.)

Jimmy Choo To You